My current supply of varnish is woefully inadequate.  Really, I'm down to just barely this much.  So I visited my good friends at dickblick.com last night, which took forevah because my wifi kept blinking out.  By the end of the night, I had accidentally ordered two 32 ounce bottles of varnish, 48 canvas panels, 30 canvases, one varnish brush and 19 various bottles or tubes of paint.  I say "accidentally" because I only meant to order one bottle of varnish.  Heh heh.  The new varnish brush is because my old one, the brush I have used to varnish every single stinkin' painting I have varnished since the dawn of time, is broken.  The ferrule broke, which is curious because it is seamless.  Here, look:

It still works, but some of the bristles have fallen out.

So today I was at the grocery store in Kalispell and I ran into a friend.  Initially, this was an unfortunate incident, as I haven't taken a shower in several days and was hoping my disguise would keep me incognito.  Alas, no such luck.  However, when Leslie saw me she said, "Oh Christine, I've been thinking about you.  Do you still want to be killed off?"

Is that not the coolest thing ever to have happened in the produce section???

What -- doesn't make sense?  Ok, so, a few months back Leslie was telling us about the murder mystery she is writing (final edits happening as we speak, book to be published in early August) and I begged her to kill me off in a book.  Truly, I begged.  And now it's going to happen!  She has to introduce me in book two so she can kill me off in book three.  I CAN'T WAIT!  How's that for a great way to end the year?  BANG!

Or maybe multiple stab wounds.  Not-so-accidental drowning.  Poison?  Thrown off a cliff in Glacier Park?  I am so excited!  It's going to be hard to wait and see how I end up.  Or how I end, I guess I should say.  I will keep you posted, but it will be a while.

What else.  Of course, everything else is anti-climactic now that we are all contemplating my fictional demise.  Maybe I could be hacked to pieces and stuffed in a vat of paint....

So.  Paint.  My friend Linda wants to commission a rooster, but she wants one in more realistic colors.  Here's the problem:  I'M NOT SURE I CAN DO THAT!  Yesterday I took that other canvas panel - the one I have repainted four times - and tried a more natural rooster.  Here's what happened: 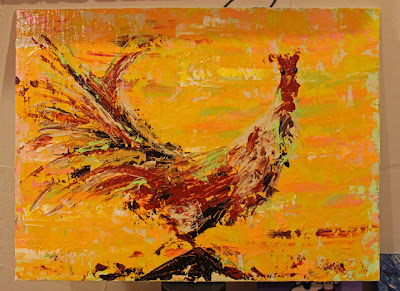 Oops.  He's actually really normal colors - Van Dyke brown, burnt sienna, unbleached titanium - but the background kinda throws it all out of whack.  He's lovely - he's what I refer to as "a sunny kitchen."  And I will try again with a more normal background.

There's more in the flock, too: 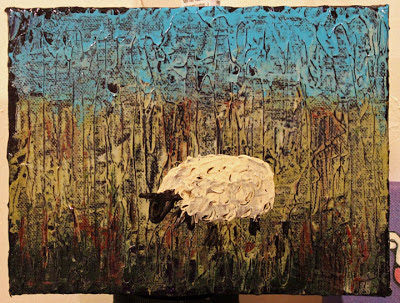 You can't tell in the picture (and you can't really tell in real life either) but the background of this canvas is a deep dark purple, not black.  The next one, which has a brown background, was painted in the dark of night when I couldn't sleep.  Literally.  Like 3:00 a.m.

The first one is 8" wide x 6" high, and the second one is 18" wide by 6" high.  Interesting.  I was showing someone my Roxie portraits the other day, and the first two sheep and a few of the roosters were out on the counter.  She said, "Man, you sure do have a style."  I guess that could be interpreted in several different ways but I chose to look at it as a good thing.  Remember when I was saying I couldn't find any artists online who paint like I do, and it was making me feel mildly freakish?  I've decided I'm okay with my individuality.  Even when I find work by another artist I like and I try to emulate their style, it comes out totally different.  I showed Derek the painting that inspired the first poodle portrait and he says they look nothing alike.  Which is actually true, but it's interesting to be able to adapt a reference photo or painting to my style.  I've decided it just makes me awesome, and pretty soon I'm going to be killed off, too!  Just think - if I can get other people to kill me off in their books, I can become a professional murder victim.  I'd put that on my resume in a New York minute.

It's only 9:45 pm here and poodle has already put herself to bed.  I was hoping she would last until midnight.  Maybe she's just resting before getting her second wind.  Like last night. 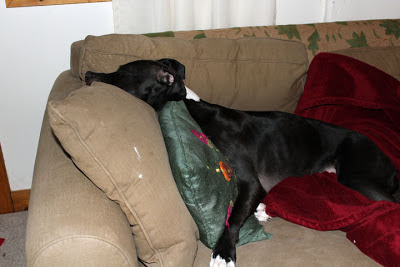 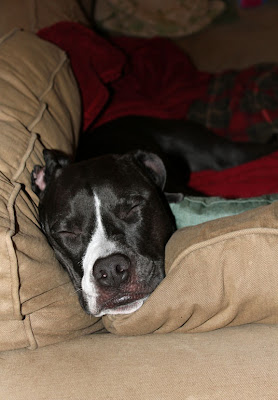