I started a blog post over a week ago - and this is as far as I got:

I've been trying to think of a way to concisely tell you everything that has happened in the past couple of months, including my house and lot selling, then my dad dying, then my commercial building selling, then my very dear friend Viki dying, then my offer on a house in Vermont being accepted -- but it's too much to fit in one sentence.  (HA, see what I did there?)  So much in my life has changed this fall, it has been almost impossible to keep up.  The end result will be my moving back to Vermont next week.  Roxie and I are having a goodbye party after work today, and I'm sure there will be lots of tears.

Perhaps later I will regret not keeping closer tabs on everything that has been happening, but right now I'm just overwhelmed.  I'm writing this final blog post of 2013 from the couch in my mother's house in Killington, Vermont.  We ended our five day drive today.  Since Friday mid-day, mom, poodle and I have been in Montana, North Dakota, Minnesota, Wisconsin, Illinois, Indiana, Ohio, Pennsylvania, New York and now Vermont.  We had some seriously bad weather in North Dakota and more seriously bad weather around Buffalo, New York.  Other than that, ... piece of cake.  We spent a night in Billings, MT, then Valley City, North Dakota (damn crazy wind), a night with Lolly and Paulina (and Max!) in Evanston, Illinois, and a night in Fredonia, New York.  The only casualty was the hydraulic arm on the rear window of the jeep, which gave up the ghost in the -13 degree temps in North Dakota and sprayed pink foamy stuff all over the place.  I hope that's not an expensive fix.

Tomorrow will be a day of sleeping late and doing nothing, partly because I'm ready for a day of not getting up when the number on the clock starts with a "7", and partly because I'm ready for a day of doing nothing, but mostly because I'm going to do laundry tonight so all of my clothes will probably still be wet tomorrow.  The moving truck with all my crapola isn't scheduled to arrive in Burlington until the 7th, which means I won't see it until the 8th at the earliest.  Between now and then we will be heading to Morrisville so I can have a last minute meeting with the sellers to get answers to all my little questions, like how to work the generator they are leaving for me and where to find the water shut-off valves.  Then we are going to a memorial service on Friday, and back to Morrisville on Saturday to paint some walls before the furniture arrives.  Pictures to follow.

Now, time for my second round of Chinese food, then some bubbly, then some serious mind-numbing tv watching.  The past few months have been so unpredictable with ups and downs - it reminds me of the post I wrote on January 2, 2011.  I leave you with that same post:

It's going to be a bumpy ride, whether you take the freeway or the road less traveled.  Potholes.  Black ice.  Construction delays.  Unavoidable detours.  Last year I hit a deer.  Last week I ran out of gas.  But for every valley there is a hill, and sometimes, when you least expect it, you crest a hill and the view just takes your breath away.  Crest more hills, my friends.  I wish you breathtaking views. 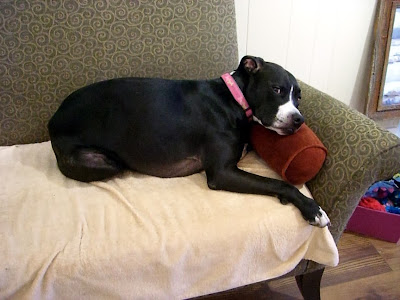 ACK!  POODLE!  WHERE ARE YOUR LEGS???  That does NOT look comfortable.

Anyway, here we are at work, and not a single person has come in.  It is one hell of a dreary day outside.  So I'm varnishing the trees I painted after work yesterday.  I've got a sneak peek but first, did I show you the painting I finished the other day/last week/sometime in the recent past? 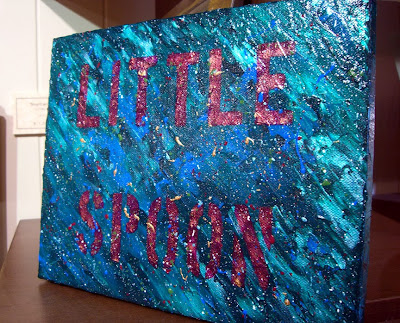 It's a poodle painting, because she is my little spoon.  Derek thinks the words are too subtle, but it's a night time painting, so dark and subtle are okay.  (Hark!  People just came in!  Back in a few....)

Okay, that was quick.  Here is what the work table looked like this morning: 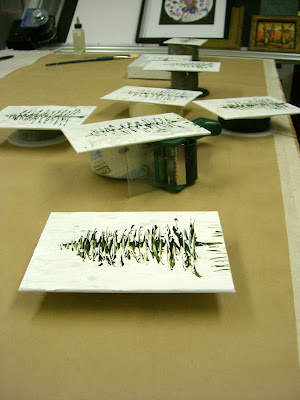 That's seven new trees, plus the one I painted last week.  Tammy wants five so I figured I would give her a couple extra from which to choose.  Here are some quick pictures of how they look now, wearing their first coat of varnish: 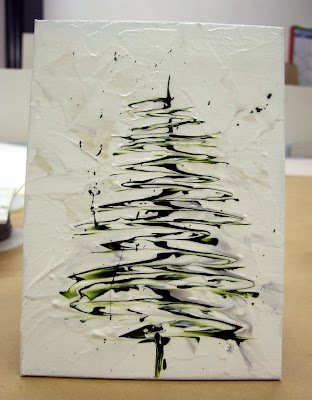 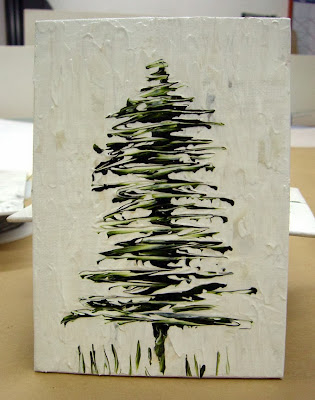 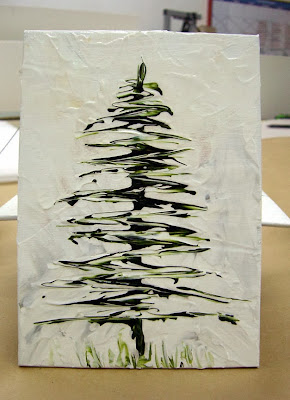 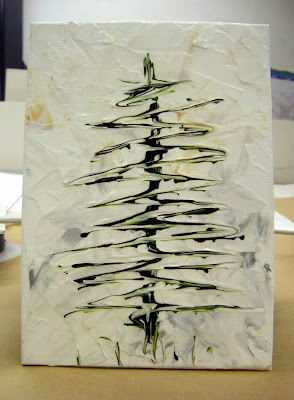 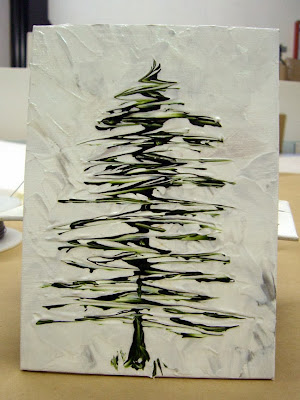 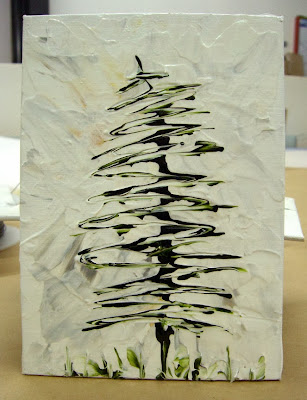 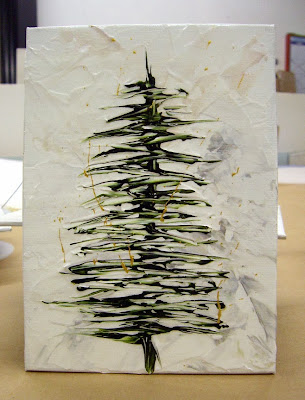 I never know how these are going to come out, and each one is always very different.  My favorite is either the first one or the one with the crooked top.

I checked the extended forecast today and I'm glad I did - we've got some crazy cold nonsense coming our way.  By Tuesday or Wednesday the nighttime temps are going to be in the single digits, with a windchill in the negative numbers.  Time to turn on the heat in the upstairs bathroom, and maybe suck it up and turn up my living room heat.  I was hoping all the boxes I've got packed and stacked around my bedroom and living room would help cut down the chill factor but, alas, not so much.  At least I know the power outage the other day was due to some dumbass in a pickup truck hitting a transformer rather than a potentially worrisome repeatable issue.  Although out here, a dumbass in a pickup truck hitting a transformer IS a potentially worrisome repeatable issue.  I've got just under a month left in my very cold little home, so here's wishing for a December full of balmy days and low electric bills.  (Ha ha ha, yes, I know, but a girl's gotta dream.)
Posted by ckv at 5:29 PM No comments: