Heh.  I almost missed the entire month of July.  So much has happened, I can't even remember what I wanted to tell you.  There was the giant, icky, pointy spider; a field trip to Rock of Ages; a 4th of July road trip to Connecticut while poodle stayed home with a babysitter; marauding cows; Leslie's new book; other stuff.  For now, I will just mention the cows.

There is a farm on our running route.  Wait, back up a minute.  In the interests of full disclosure I will say that when poodle and I "go for a run" we may cover five miles of road, but it is slow going.  My neighbor George?  Now THAT GUY runs.  Poodle and I run/walk.  Sometimes it's a full-on run/stop.  But we've got strict SOP's we adhere to (quick tangent - notwithstanding these SOP's we still almost bit it on another run recently because a woman driving a blazer was not paying attention) and, you know, safety first and all that.  Anyway, this farm has cows that often hang out by the road, so we stop and say hello.  Actually, we say, "Hola, vacas."  Roxie knows them as vacas, not as cows.  So here we were, chatting up the vacas, when one of them started walking over to us.  Then a couple more came.  Keep in mind the electric fence around this field of cows is comprised of exactly one lonely strand of wire.  So we started running again, and damn if those cows didn't start running with us.  Do you know how disconcerting it is to know the only thing separating you from a thundering herd of cattle is one lousy strand of wire?  Got my heart pounding, that's for sure.

Okay.  Anyway.  Moving on.  Recognizing I said in my last post that in the NEXT post I would tell you about my new job, I will start out with a re-cap of the flora situation around here because it changes so fast I can barely keep up.  All of the following happened in the last two weeks of June: 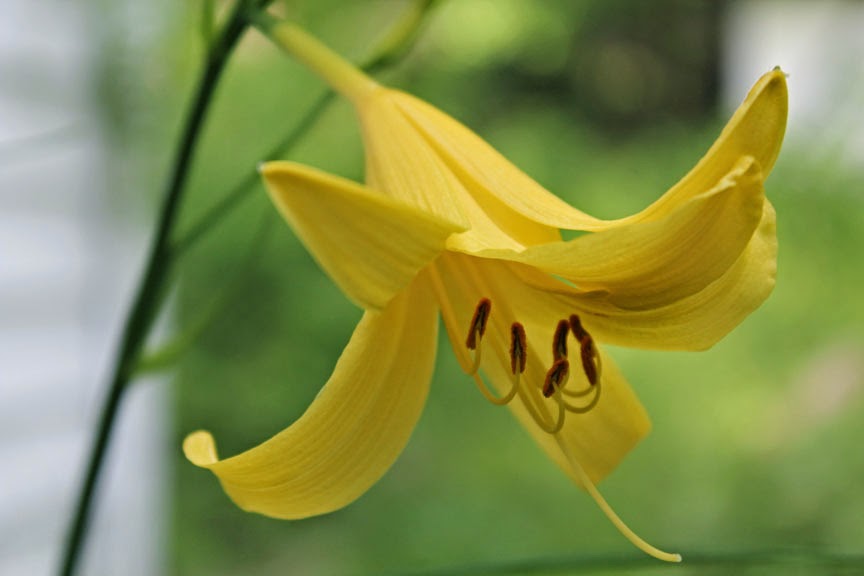 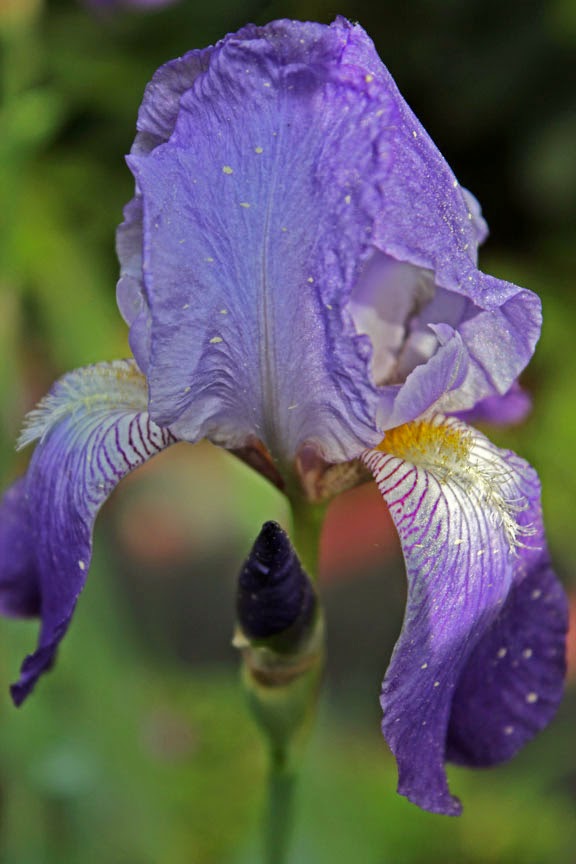 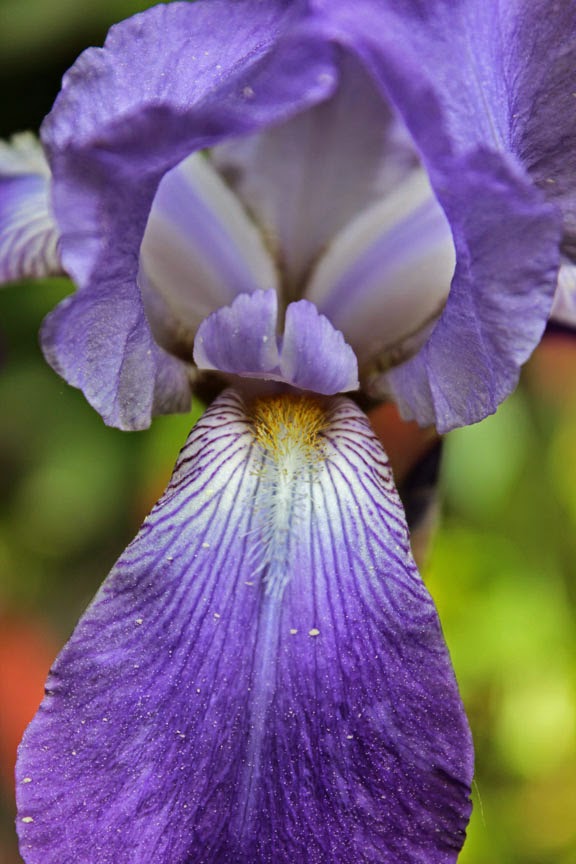 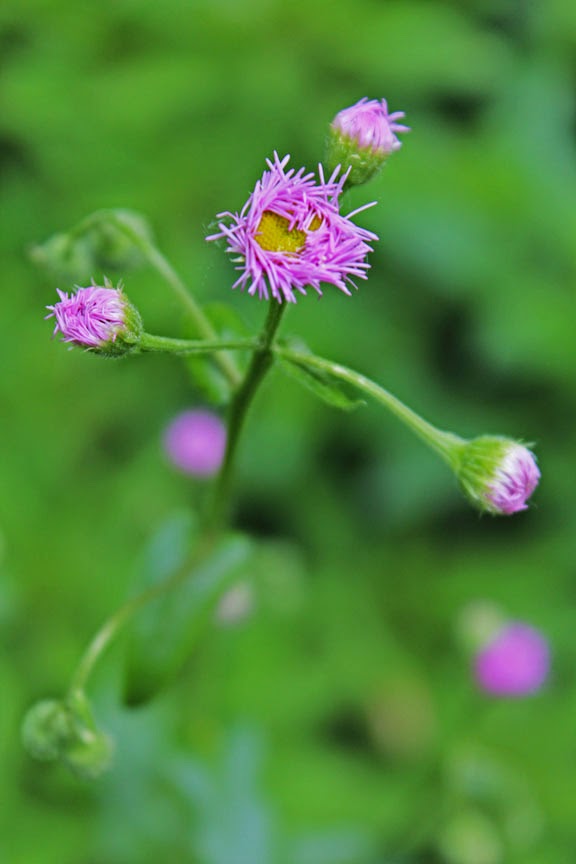 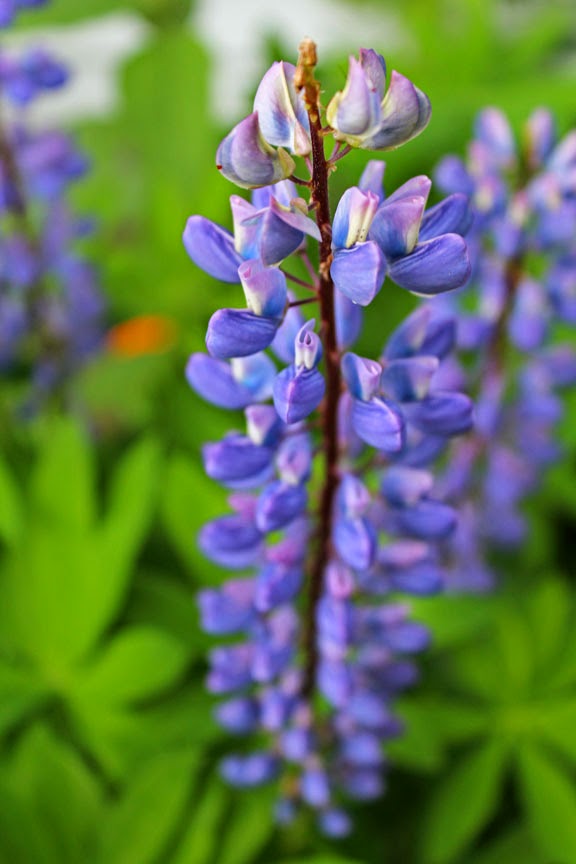 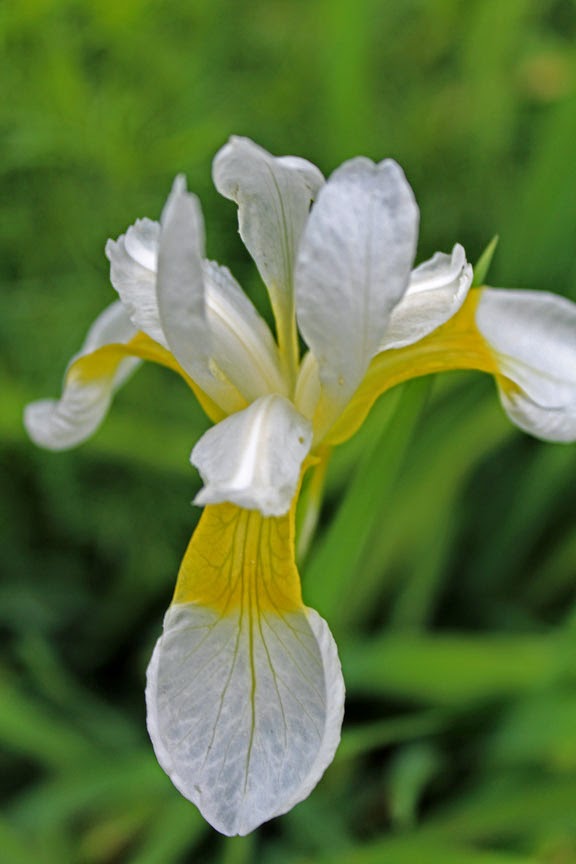 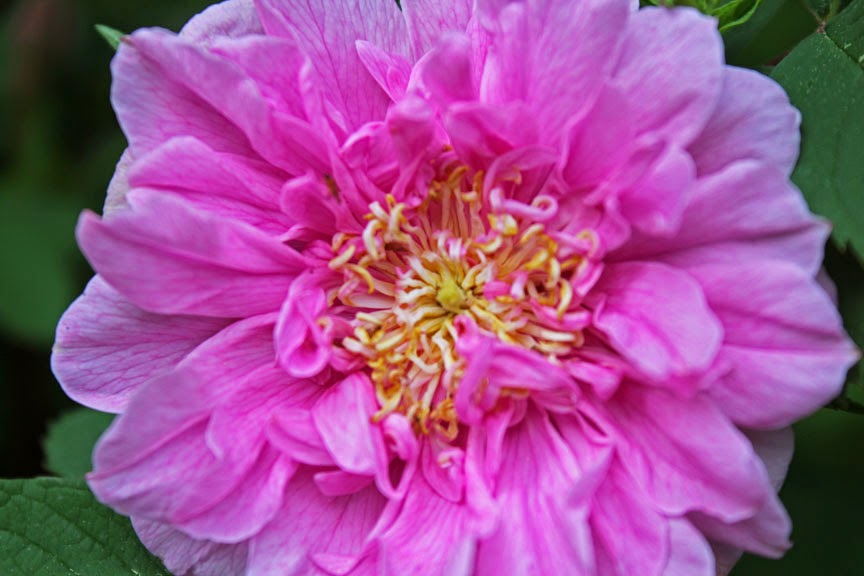 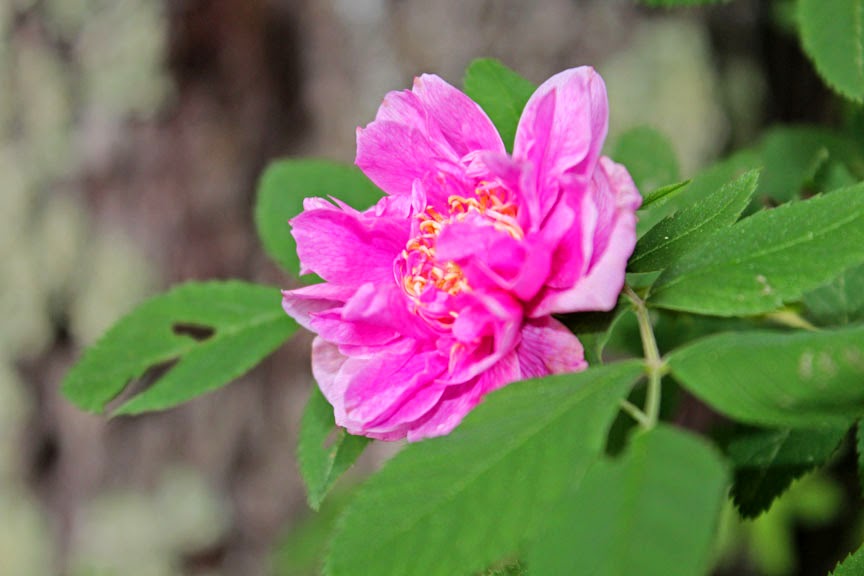 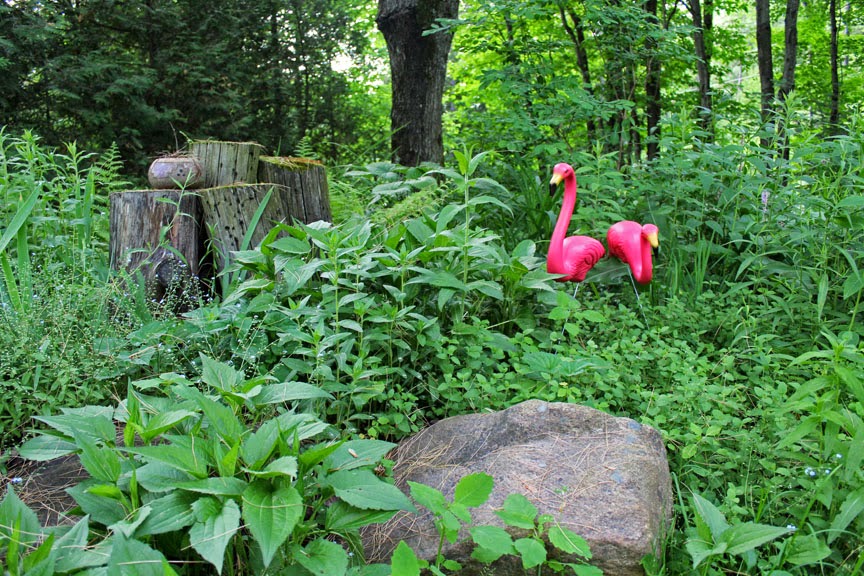 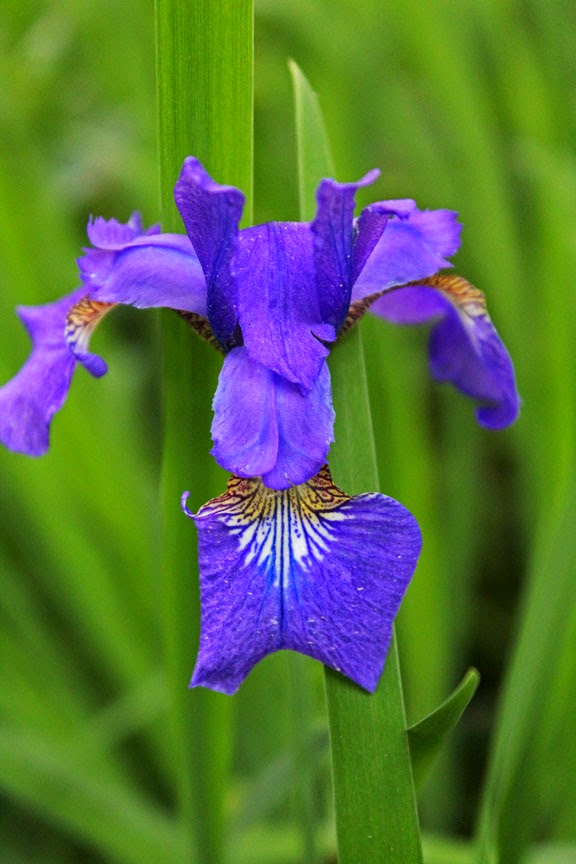 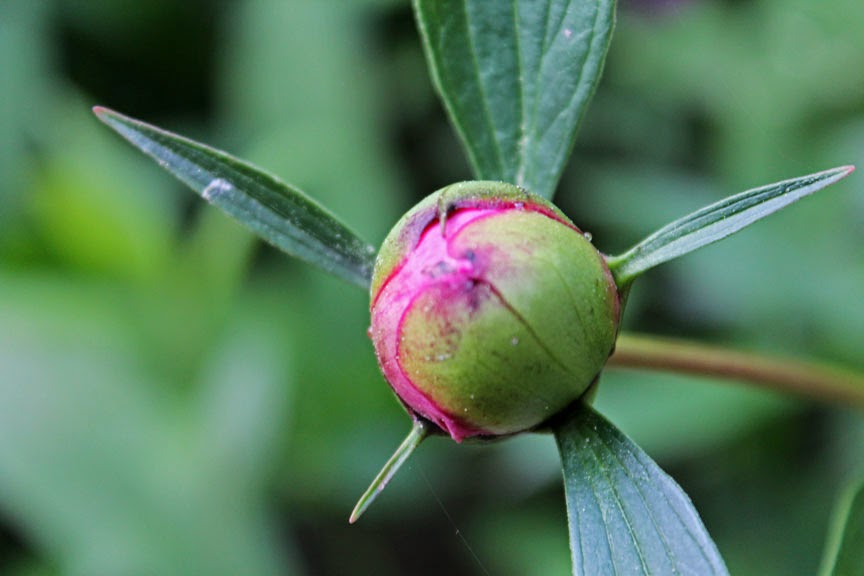 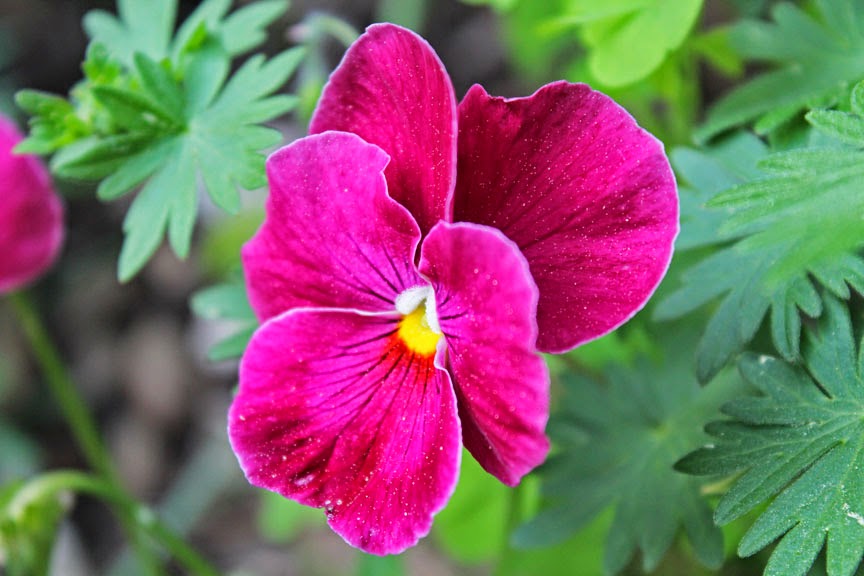 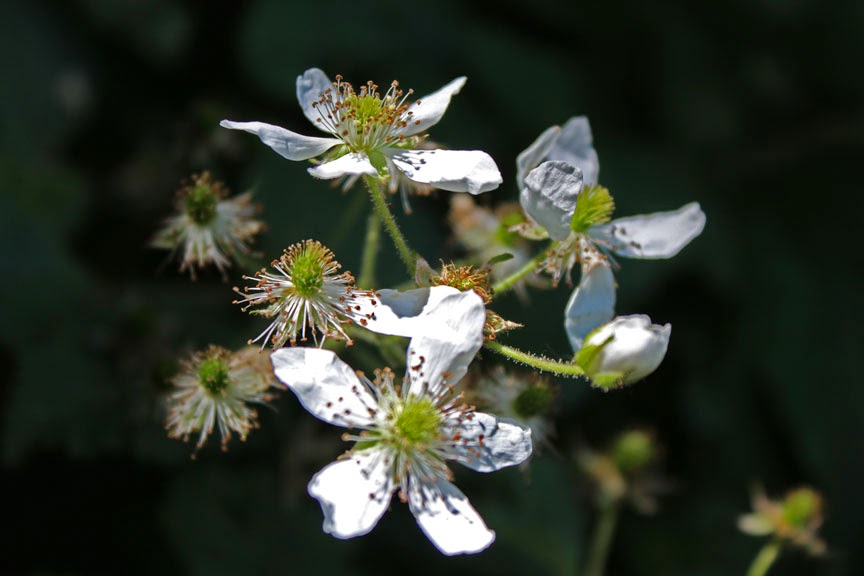 Okay, I generally bump up the contrast in all of my photos, but I TOTALLY upped it on that last one.  It looks cool. 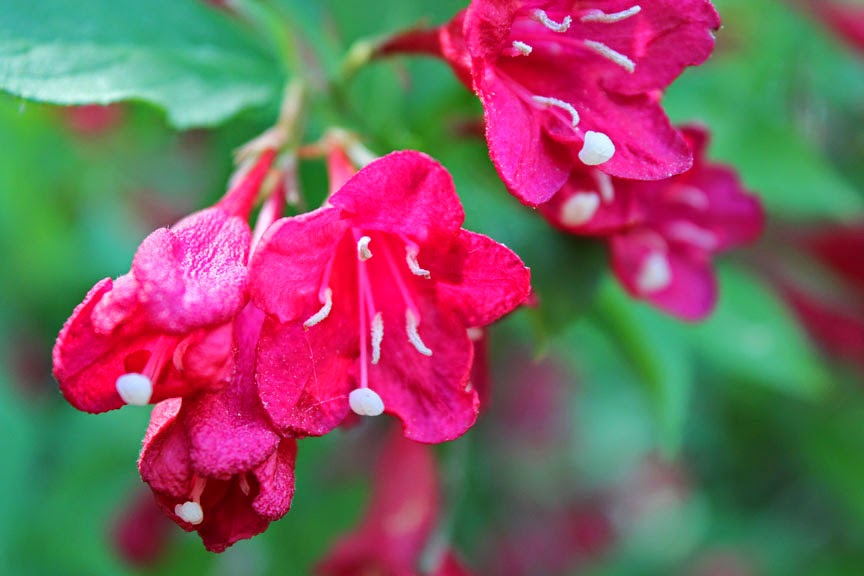 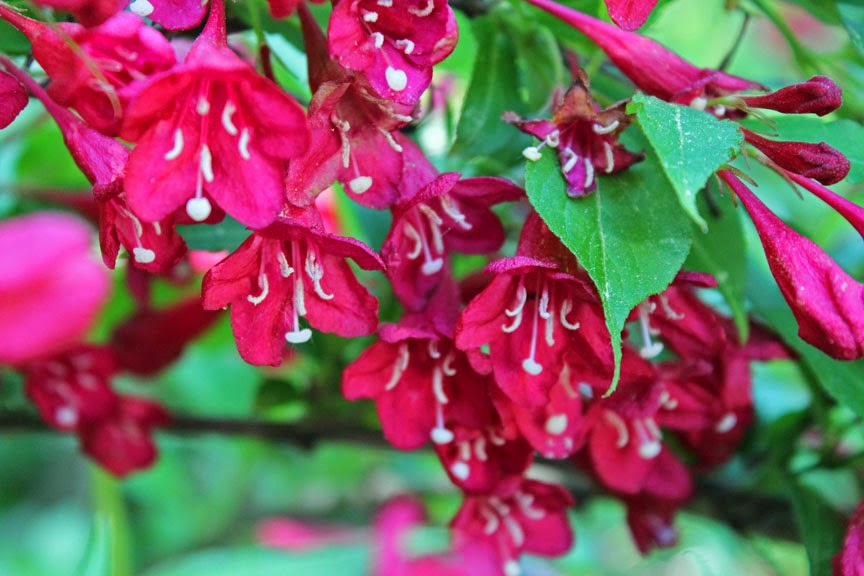 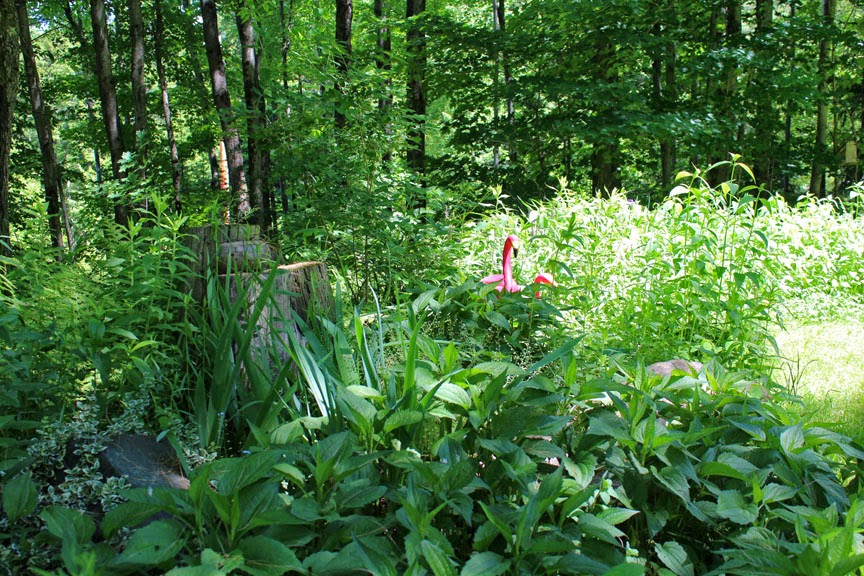 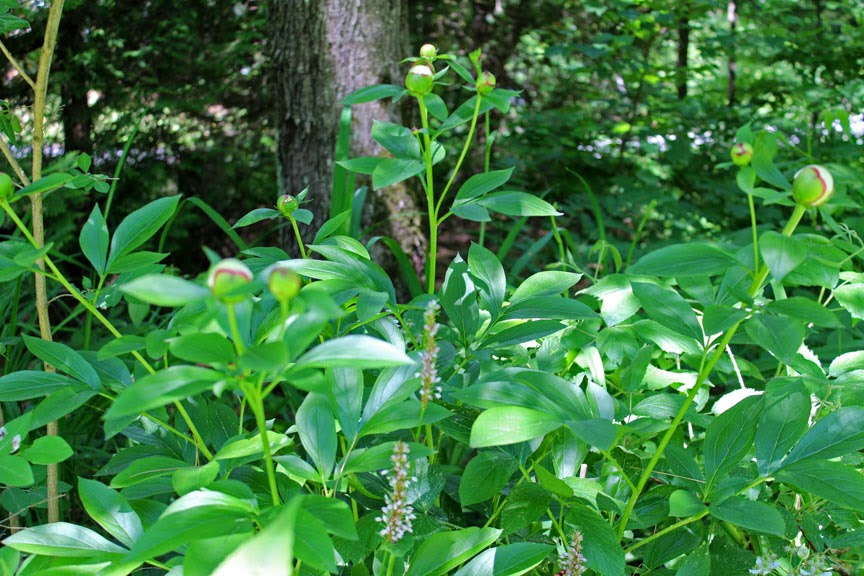 That whole section where the pink flamingos are growing (I'm quite sure they are perennials) is currently swamped with bee balm, and soon to be populated with black-eyed Susans (or, as I keep calling them, lazy Susans).  The peony is also over there, and of the five peonies I've got this is the only one that had more than one flower.  All the others were pink, this one was white. 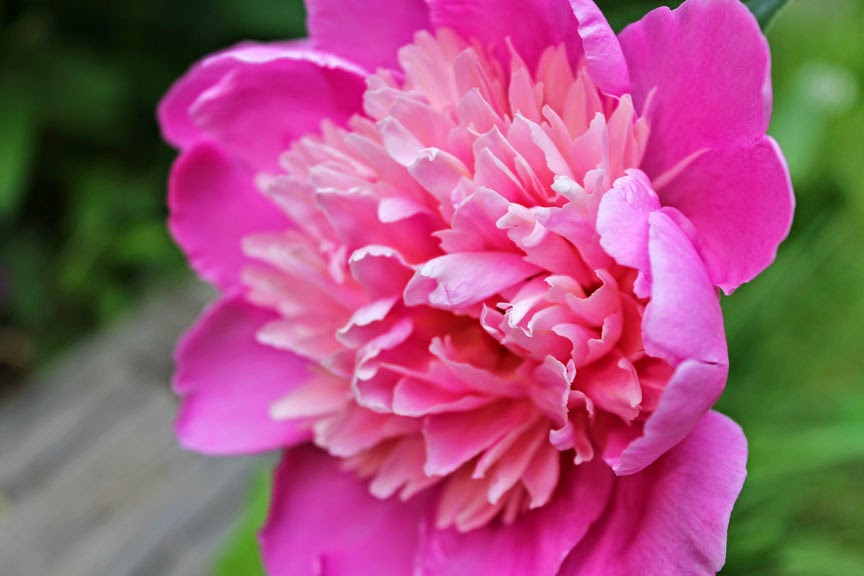 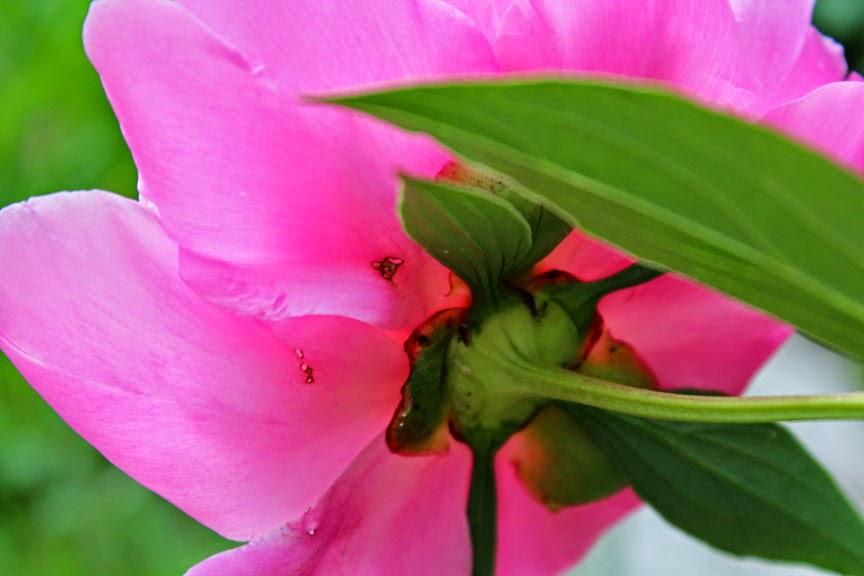 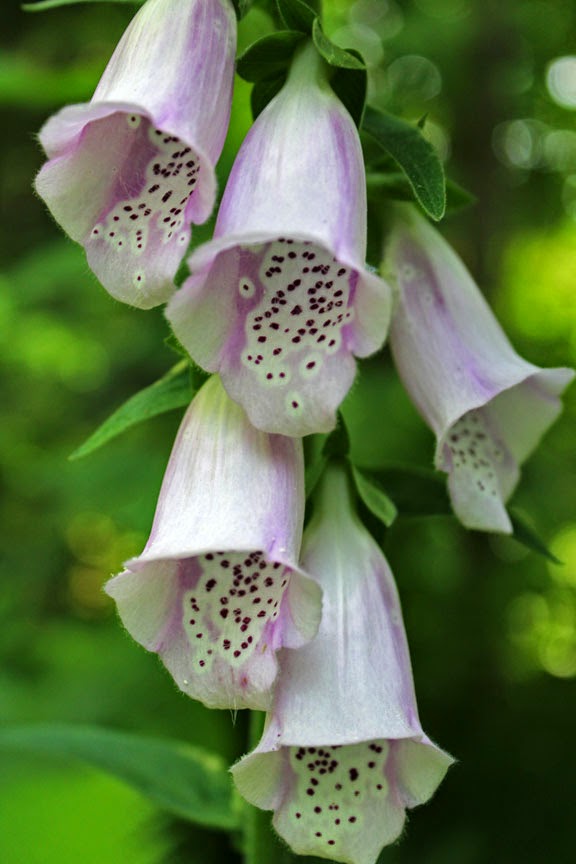 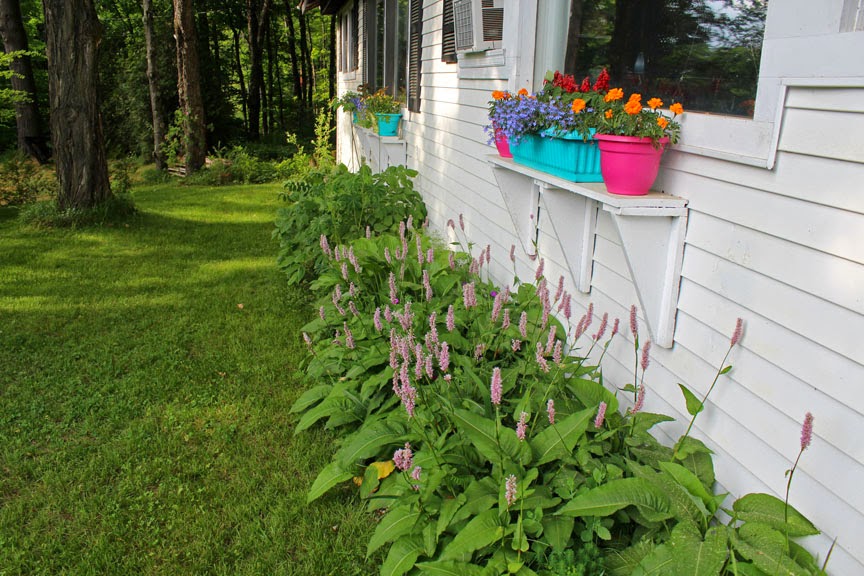 All kinds of crazy nonsense grew along the front of my house, like those fuzzy pink things I liked.  And what the heck is this: 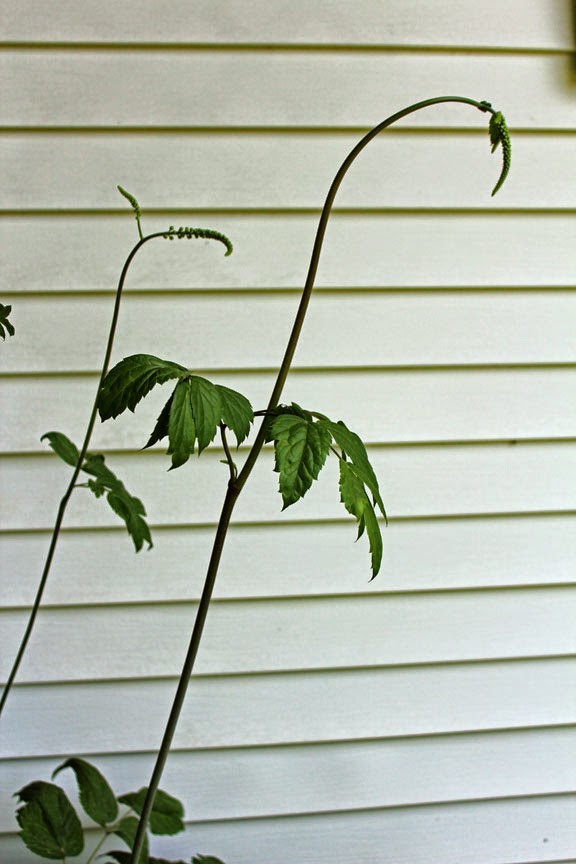 That bugger was about five feet tall when I took the picture.  Here is the top bit, up close and personal: 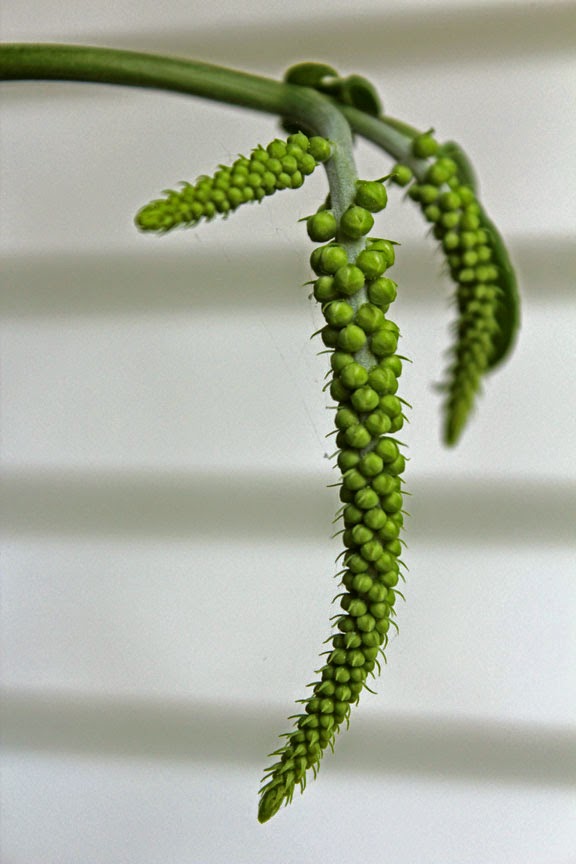 Seriously, what is this thing?  I just ran outside and took updated pictures so you can see how it has progressed in the last few weeks: 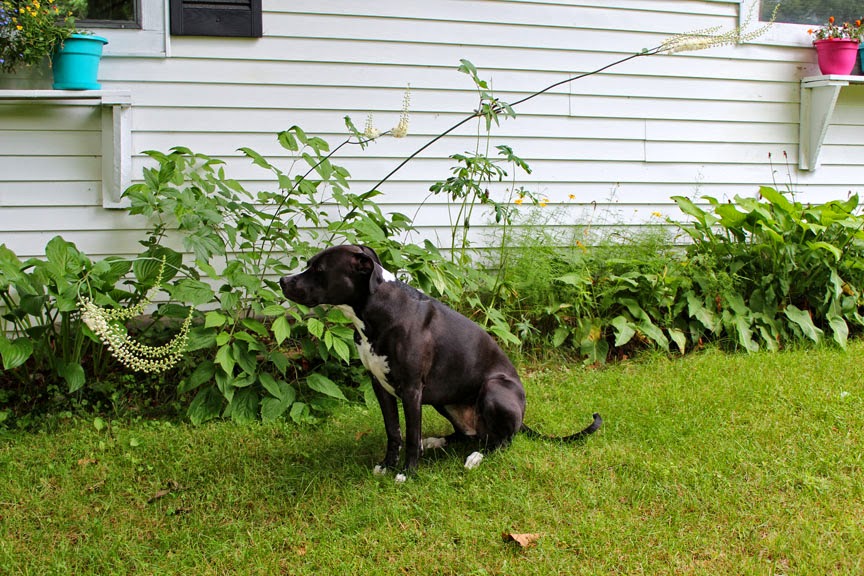 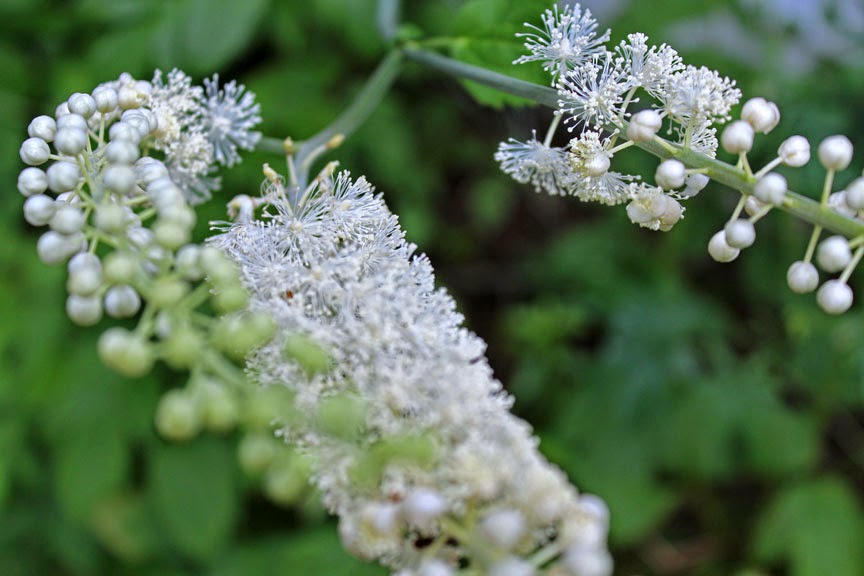 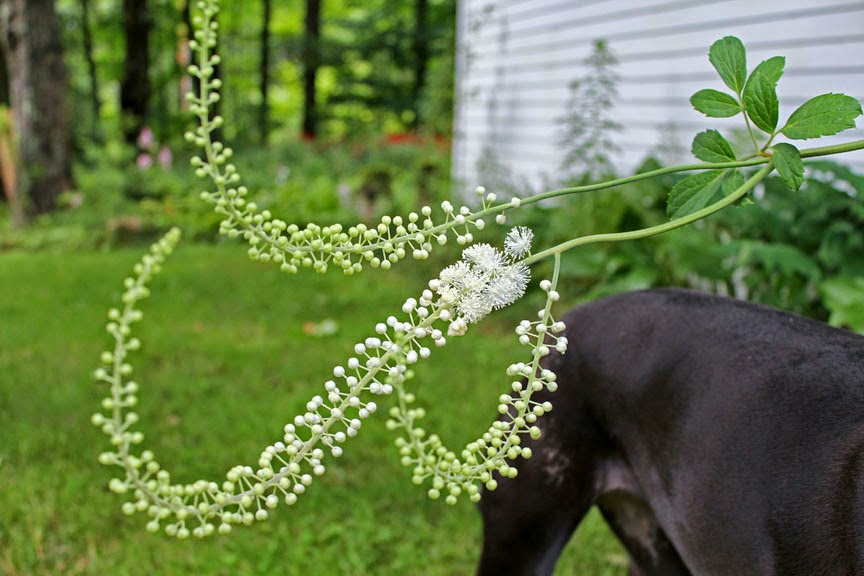 Poodle butt for scale in that last picture.  If those things would stand up straight they would be way taller than I am.  Ann was saying the other day she wishes there were something like "photopedia" - a way to take a picture of something and put it online to find a match so you can figure out what it is.  Would come in handy right about now.  Eletra?  Gigi?  Diane?  Any clue about this weird thing?

I've got loads more in the flora department, including the white peonies, but we will save it for later.  Now on to the job.

It's not new anymore, as I've been there for over two months, but I work for a company called Euro Decals.  Although the website is old and due for a serious overhaul, you can find it here.  We make, among other things, those oval shaped auto decals.  Check out the website, you will see what I mean.  A lot of our clients are schools, retail shops, ski areas and resorts from here to South Carolina.   I work for some great people, and my office is at their house in Stowe, halfway up the Mountain Road.  I talk on the phone, spend quite a bit of time emailing with clients, fill and ship orders, do some graphic design work, and generally make myself useful.  It was an interesting first couple of weeks, because although my boss did his best to train me, the only reason he was hiring an assistant is because his last one passed away from cancer in March.  Her name was Autumn and she had been working for him for over six years.  Her cancer was diagnosed last fall, and it progressed rapidly; any death from a disease like cancer is a blow but hers was extra bitter because she was only 31 years old.  Cancer sucks.  Autumn was a huge part of the business, and there was a bit of a steep learning curve figuring out what needed to be done when there was nobody who knew exactly how she had been doing everything that she had done.  Get it?  I'm still learning as I go, and I will be playing the "new girl" card for a while, but so far so good.  It's not rocket surgery, but it is fun and laid back and interesting, and I'm all over that.  Plus, I only work four days a week.  Extra plus, I can wear flip flops to work.  This is a huge change, coming off 16 years of no open-toed shoes at work.  It was kinda weird.  Extra extra plus, I take poodle to work with me some days.  That's awesome.

So there you go, in a nutshell.  I was in the right place at the right time, and it has been good for both me and for the company.  Kathy told me since I only work four days a week (Monday - Thursday) I need to consider Friday a work day at home and paint all day.  So far that has not happened.  In fact, I haven't painted a thing in ages except the beginning of an outdoor art installation for the side of my garage.  That's if you don't count all the turquoise spray paint I've been slinging around here.  I'm thinking I might slap some of that on the window trim on the front of my house.  Just because I can.

Next up, Crime Rib and my Dr. Seuss tree!