Jane Goodall was a guest on Science Friday yesterday, and she said something that spoke to my heart:

"Louis Leakey deliberately chose me because he said he wanted somebody whose mind was uncluttered by the, in his opinion, sometimes not good scientific thinking."

The benefits of an uncluttered mind.  That's exactly how I feel about my lack of formal art training - a mind uncluttered by the "rules" does not make me less of an artist, rather it allows me the freedom to explore *all the things* on my own terms.  After my Jo Sonja post, my cousin emailed me and said she loves my range, to which I replied it's less a matter of having a large range and more a matter of not being afraid to try.  That, to me, is the benefit of no formal training - I can try whatever and however I want without fear of doing it wrong.  There is no right or wrong.

Now.  That being said, I still make a lot of crappy art.  HA!  Remember at the end of my Jo Sonja post I said I was going to try that color palette on mixed media paper?  Well, I did.  Two things about this experiment were new and different for me - painting on paper and using a vertical surface.  I paint flat on a table, not on an easel, and I don't currently have clear table space big enough for a 16" x 20" paper that needed to be taped down.  (I had a hard enough time cutting this piece - the roll of paper is 42" across by eight yards and it is very tightly rolled.)  So I taped it onto my bathroom wall.  That space is Studio B, and it's where all the messy fluid art happens.  Plus a lot of art storage.  Here's what it looked like with my painting on the wall: 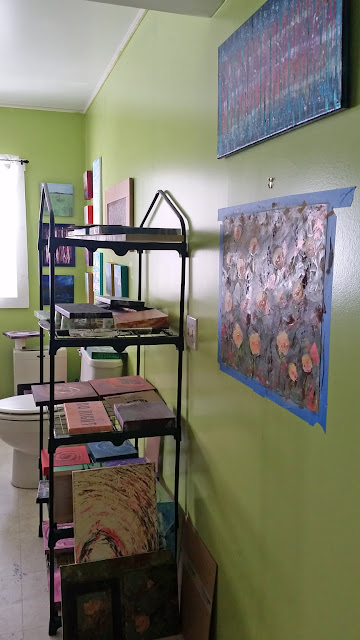 Seating for one, right there.  Maybe I shouldn't have said it's the room for "messy" and "fluid" and then showed a picture of a toilet....

But I digress.  This first vertical painting experience was not a total success - I probably should have used a larger palette knife to begin with, and I shouldn't have been so frenetic.  Maybe then I wouldn't have ended up with a face covered in paint.  It was a mess.  Here's the end result (of the painting, not my face): 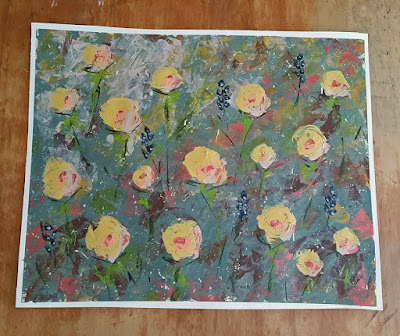 Obviously my paper-cutting skills are poor, and if you could see it up close you would notice my tape peeling skills are just as poor.  We can't argue about whether the painting is good or bad because that's subjective (I would say it's not great and the composition is terrible) yet we also can't argue about whether it is right or wrong.  To this uncluttered mind it's art, therefore it's always going to be right.
Posted by ckv at 10:56 PM No comments:

Many, many years ago we had a painting of a pear hanging in the gallery that was about three feet wide and six or seven feet high.  It was glorious.  Another artist poo-poohed it saying that it wasn't "painterly" because it was so much larger than life, and that always bothered me.  Hogwash, I said.  Hogwash.  I haven't thought about the giant pear in ages but it popped into my head last week so I googled the definition of painterly.  Here's a screenshot from Merriam-Webster: 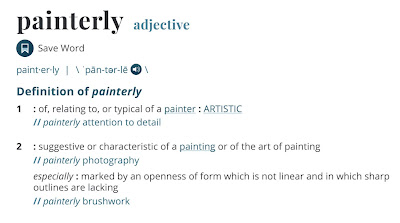 And here's what Dictionary.com says:

Mmm-hmm.  I don't see anything about "larger than life rendering = not painterly."  But just to be on the safe side, I checked Tate.org because surely they would know.

Just as I suspected.  Hogwash.  (Side note, I also Googled "hogwash" because that's a weird one, and click here if you are interested in word origins.)

So anywho, feeling a little vindicated I painted this: 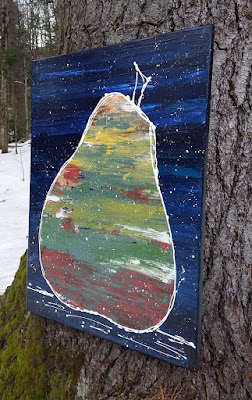 Although at 18" x 24" it's not nearly as big as Genise's pear, I named it Painterly Pear as an homage.  And this is what happens when you have over eager helpers: 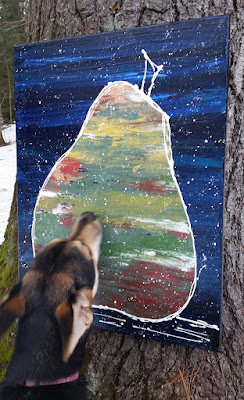 Continuity note:  the colors in the pear are the same Jo Sonja paints referenced in my last post, again with the addition of Naples yellow.  And a lot more rose gold.  StanLee approves.
Posted by ckv at 11:16 PM No comments:

Remember that striped painting I did with Jo Sonja acrylics?  I originally bought about five colors in January of last year and here's the first thing I painted with them, which I posted on Instagram a couple of weeks later: 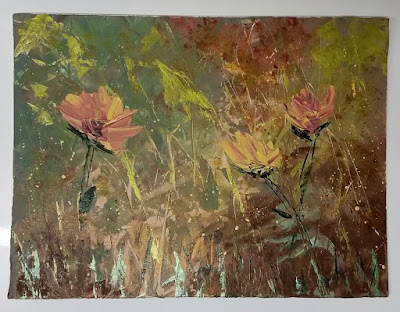 I have no idea how this happened, but I love love love it.  Mixed in with the Jo Sonja paints there is also a Naples yellow, a green gold and something like a red iron oxide.  The background had a real vintage feel so I added a few other colors that worked with that vibe.  It reminds me of something my great-aunt Peg painted back in the '60s.  Those iridescent green bits at the bottom look out of place in the picture, but in real life they work. 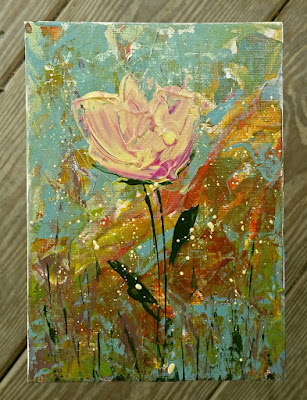 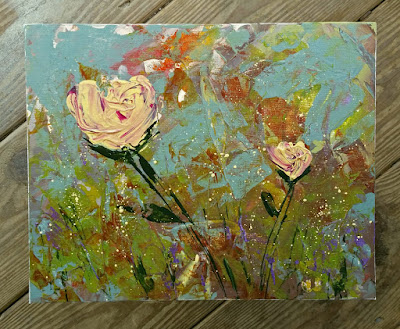 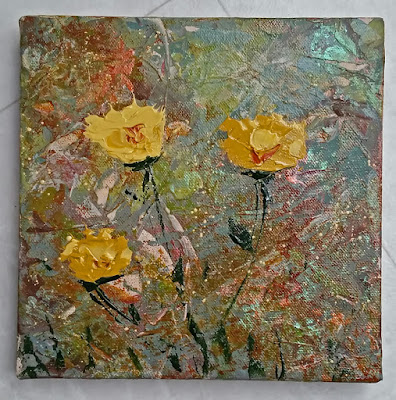 That last picture is particularly bad, but you get the idea.  After all was said and done, I like the first, largest one best - maybe because it was the first and it surprised the hell out of me.  But the last one has the best vintage feel - it almost looks like fabric.  There's something about those transparent colors on top of the grey-green.  The first three paintings are on canvas panels and the fourth is stretched canvas, but I just got a roll of mixed media paper and I think I will try this color palette again to see if it looks any different on paper.  I shall report back with my results.
Posted by ckv at 10:37 PM No comments:

Forever In My Heart 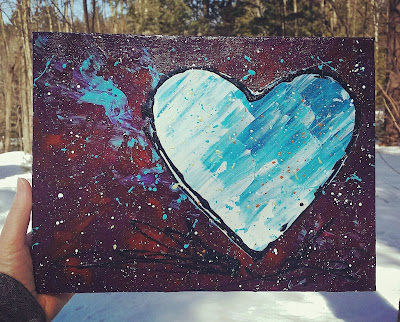 It's no secret that I don't paint with brushes.  I think it's because you hold most brushes the same way you hold a pen or pencil, and I can't draw.  A palette knife is a whole 'nother animal - you hold it in a completely different way.  So in the interest of keeping things *exciting*, I gave myself the challenge of creating a painting using only brushes, and in the interest of keeping it REAL, I'm going to show you the result.  It's definitely not a winner, but I learned some things.  Here's where I started - first layer: 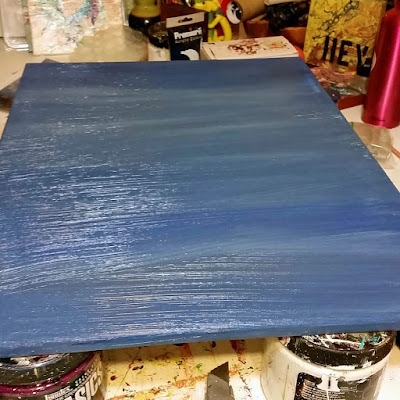 I did a little color correction on all my indoor photos because, remember, I'm a vampire painter and only paint at night.  This is very wet paint and I like the deep horizontal-ish linear texture.  After the next layer, things were looking pretty good: 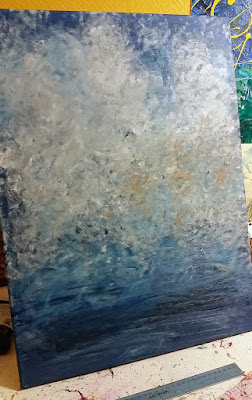 Again, crappy picture because crappy lighting, but you get the basic idea.  More fun texture.  I should mention that I was using a reference image that I found online years ago.  At this stage of the game I was feeling optimistic.  During the next layer I went all crazy with more paint and a water spray bottle: 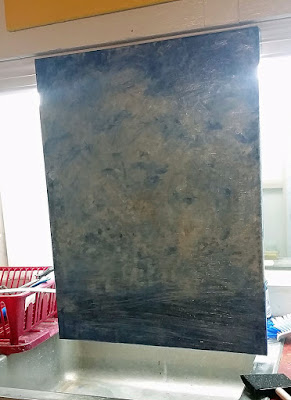 REALLY horrible picture, but this is to show that I had to put a screw in the trim below the cabinets so I could hang the painting over my art sink while it dripped.

In the next layer I lost some of the texture that I thought was cool, which was unfortunate, but the piece was still looking good.  Here it is in the light of day: 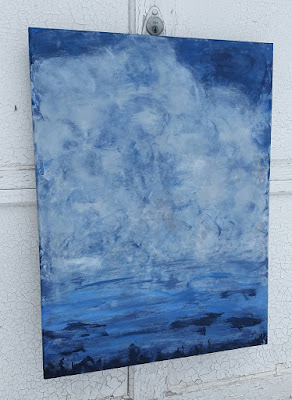 This was definitely the "I could wreck it at any moment" stage.  I've got two other pieces right now at this same stage - I need to bust thru the stupid "what if I ruin it" thoughts and embrace the crap shoot aspect of my art practice.  Which I did with this blue one and it all went to hell.  HA!  The canvas spent two more episodes dripping over the sink after I washed a poorly executed cow off the bottom.  And I think I should interrupt this narrative to show you the brushes I have been using: 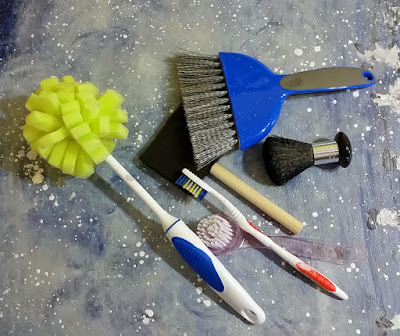 Woo hoo!  Dollar Store finds.  The very first layer, which I didn't show you because I forgot to take a picture, was painted with the foam brush.  And it was crap.  I blame that mostly on the paint - low quality craft paint that I threw away right after using it - and partly on the brush.  The next layer, the one in the first picture above, was done with the big whisk brush.  Side note - that one came with its own bonus palette: 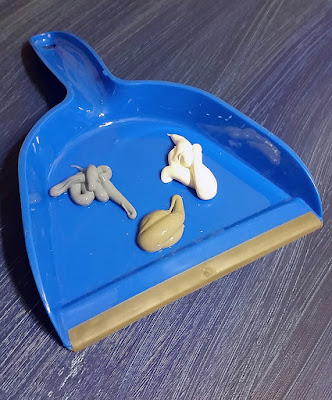 But back to the brushes.  The little black make up brush was terrible - it soaked up way too much paint and just held on to it.  I have found that make up brushes work great with alcohol ink, but not so great here with acrylics.  The kitchen sponge brush (which looks suspiciously like a toilet bowl cleaner) made some really fun texture.  Sponges tend to do that.  My faves were the little round one, which also came from the make up aisle but I can't remember what it is for, and the good old fashioned toothbrush.

Back to the painting.  My inability to portray a half decent cow, even an abstract cow, frustrated the hell out of me and I resorted to a flock of wonky sheep: 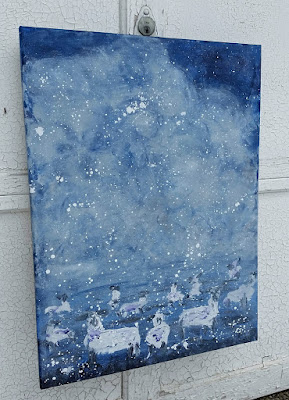 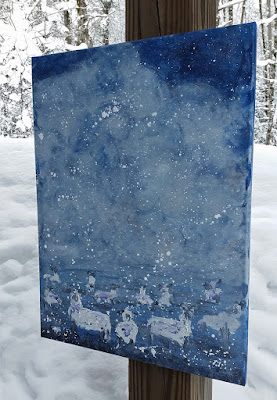 All in all it was a fun experiment.  Next time I'm going with just a toothbrush. 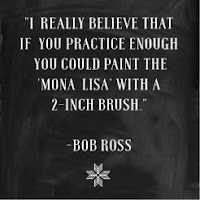