I have been exercising my facial muscles a LOT today.  Does that mean I still have to go to the gym?  Man, I'm tired.  I think the massage yesterday wiped me out, plus I was wide awake at 6:30 this morning (so I got up and put a second coat of varnish on a painting) and when I sorta fell back to sleep I had an unsettling dream about not being able to save Roxie from the car as we were floating out to sea.  Or something like that.  Disturbing.  And now I'm tired.  And yawning a lot.  Flip-top head, jaw-cracking yawns.  It's hard work.

This is the latest in my variation-on-a-theme paintings.  I might call it "Golden Sycamore" but that's still up in the air. 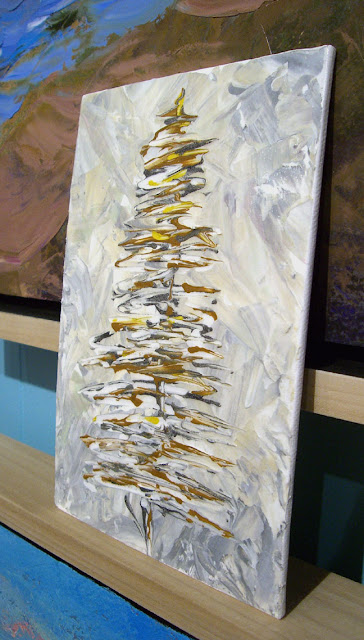 Speaking of none of that, I have two photos to share with you today.  The first is another Valentine.  I painted one like this for Roxie last year, and then ruined it by putting XOs all up and down the sides.  I still love the front, just not the sides. 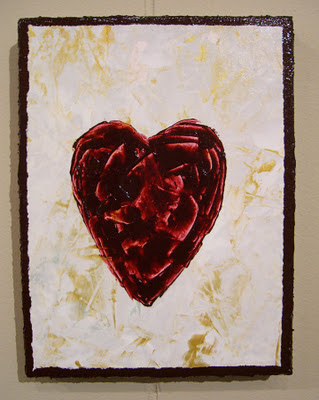 I think it is funny that I can't draw a heart at all, but I can freehand a pretty good one with paint and a palette knife.  This piece needs a name.

And here is the second photo.  Our January has been insanely busy, and it hasn't let up.  Woo hoo!  But it is January, and some days you just need to take a break. 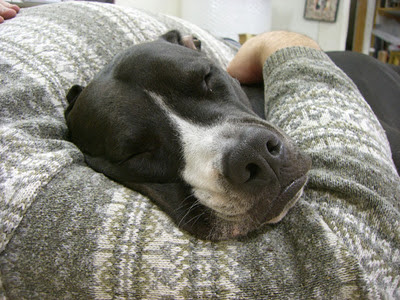 Ok, three photos.  The photo above is a close-up of this: 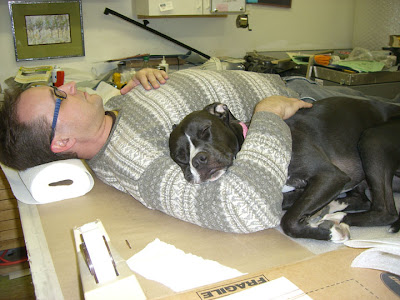 Napping.  That's the ticket.  And in an hour I am going to get a massage.  Happy Friday!
Posted by ckv at 5:21 PM No comments:

So I haven't been painting much lately, until last night.  Now there are three new pieces in the works - a new Valentine, some flowers and a new WOOF.  I need to clean up my kitchen so I have more room to maneuver; the top of my toaster oven was kinda crowded last night and my counter space is currently non-existent.

Here is the most recent piece I finished.  I called it "Plum Lovely." 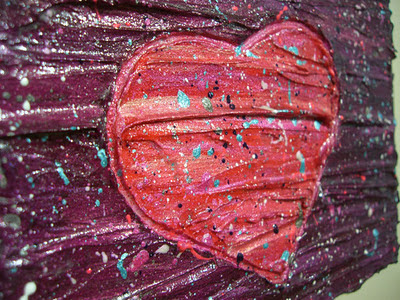 This is the latest in my "not all Valentines have to be red" campaign.  Pink!  Purple!  Woo hoo!  Groovy.

Here is an older piece I found at home yesterday.  I like it, so am going to frame it and list it on my Etsy store.  It is called, as of moments ago, "First Snow." 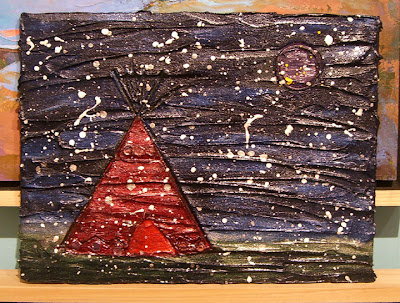 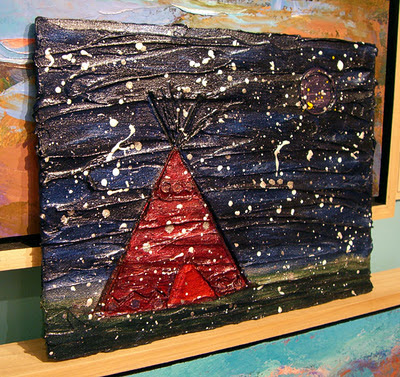 At the time - two or three years ago? - this might have been my biggest painting (12" wide x 9" high).  It is certainly the biggest painting I have done with molding paste.  Sorta funny looking, but I like it anyway.  The colors in real life are not as bright as they are in the pictures.

In some of the time I otherwise would have been using to paint (but chose not to because my studio/kitchen was a mess) I practiced my ukulele last weekend.  (That was a real beauty of a sentence.)  Just as I was muttering to myself that I will never get the hang of the whole changing chords nonsense, suddenly it wasn't as difficult and I made some decent progress with The Garden Song.  Once I master that one, I will move on to my signature song.  You know the one.  Three Little Birds.
Posted by ckv at 4:40 PM No comments: 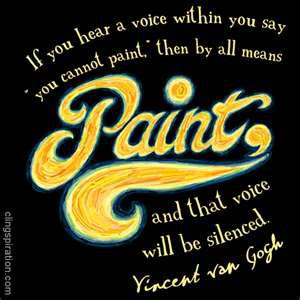 Goodbye to this little gem.  It went to live with some lovely folks down in Missoula. 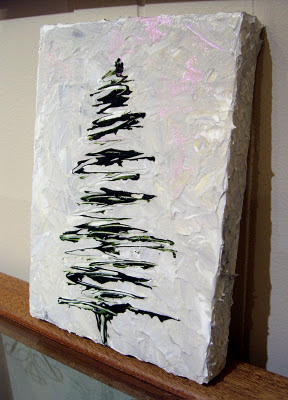 And hello to this one.  I'm not a big fan of Valentine's Day, but I painted this anyway.  It is called Heart on Fire. 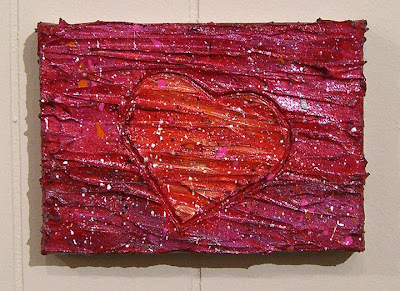 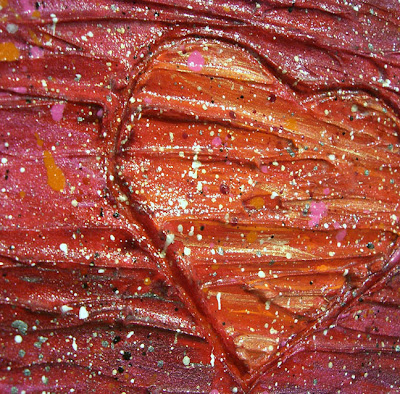 ﻿
Texture.  Mmmmm.  I love molding paste.  A total pain to varnish, but I love the chunkiness of it.  And I guess I busted right out of my temporary green phase, eh?
Posted by ckv at 1:28 PM No comments:

Our friends at Artists Frame Service in Chicago host Haiku Thursday on their facebook page every week.  Here is my entry for today:

Work has been very busy today.  Roxie has had SO many people come in to play with her, she is now napping on the couch.  I had been hoping to come in an hour late today, but at 9:30 Derek called and said he was puking and was going home.  So Roxie and I jumped into the shower and threw on some clothes.  I had people here from 10:20 this morning until 1:45 this afternoon.  Non-stop.  Sometimes a dozen at a time.  Craziness.  The best part about it is the day has flown by.  The second best part?  I think someone is going to buy one of my paintings.  And you will never guess which one.

No really, you will never guess.

It is brand new and the title has Peanut Butter in it.

I was just thinking that I am accidentally in a green phase, and was going to name this post "Green and Green" because my two most recent paintings are both green.  Then I thought maybe I would come up with a more clever name ... something with the word green ... something to do with green beans ... something all rhyme-y.  That was too much work.  So imagine my surprise when I realized today, January 6th, is Bean Day.  There we go.  Green paintings on Bean Day.  How curious.

Anyway, this one started its life as the second of what became three attempts at a MEOW painting I wanted to send to my Uncle Tato.  I painted the background and knew immediately it was a no go.  It didn't say MEOW at all. 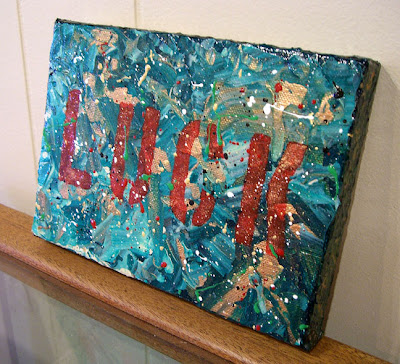 In real life this is not blue.  It is way green.  About four different shades of green.  In fact, it looks more like the background colors in this one: 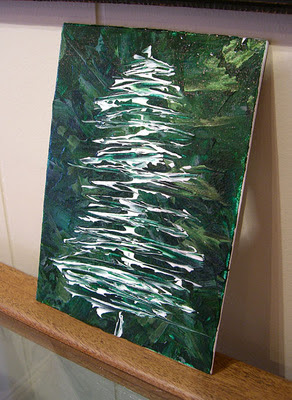 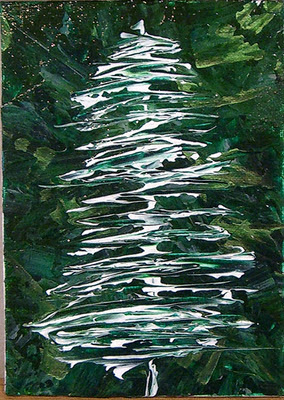 I am trying to convince myself to go to the gym after work today.  Not sure it is going to work.  I have a very attainable mileage goal for this month, but it would help if I could drag my carcass onto a treadmill.  Walking with poodle two days per week is not going to cut it, although if the weather holds (and according to the 10-day forecast, it will) we can run outside Sunday and Monday.  In shorts.
Posted by ckv at 7:08 PM No comments:

First day of work in the new year.  Roxie is not very excited to be here.  The sun is shining, the grass is green (and if we had them, I'm sure the orange and palm trees would sway).  Where is winter?

I am starting the new year with a variation on a couple of themes: 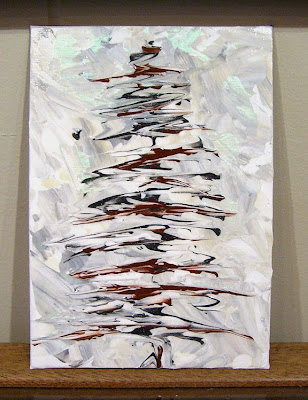 I think I might have a couple of my tree paintings made into cards.  I still want to spend the money for professional pre-press, but since it is a lot of money I am going to ask Lee if he can scan a couple paintings at the same time.  He will probably say no, but it can't hurt to ask.

Then there is this one, for the "curious" department: 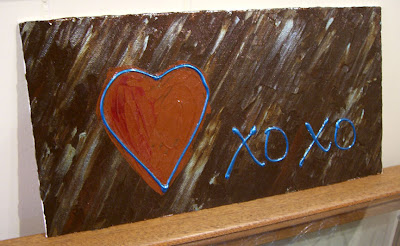 Who says Valentines have to be red?  This is called, "I Love You Like Peanut Butter and Jelly."  I can't give it as a gift myself with heart-felt meaning, because I don't actually like peanut butter and jelly.  But I'm sure there is at least one person in the world who will appreciate the sentiment!

Here is something I learned yesterday:

In numerology the year 2012 is a number 5 year. In a nutshell, the number 5 is the number of change. We should see a lot of shifts and changes both in our personal lives and in the world at large. It certainly is an interesting time to be alive!

This is from Cathleen at San Diego Feng Shui.  I embrace the concept of lots of change in my life during 2012, and I am excited to see how that change manifests itself.  This is also from Cathleen, from her Five Steps to Successful Manifesting:

3. Let go of trying to control how you will achieve your goal. That is the job of the Universe. All you are responsible for is setting your goal and visualizing the outcome. I like to think of manifesting like a rainbow. You are responsible for creating the original thought that starts the rainbow, and clearly visualizing the outcome at the end of the rainbow, but the Universe is responsible for creating the rainbow (the mechanics of actually bringing to you what it is that you want.) When you do this, you are getting out of the way and letting things flow as they are meant to. The old saying, “Let go and let God” applies here.