It has occurred to me that many of my blog posts could be called "Accidents Happen."  This little number did not turn out at all like I was expecting it to.  In my head it was going to be a bunch of light, airy colors, which is obviously why I used a wicked dark green, eh?  Huh.  I wanted a fairy tale feeling, and I guess I sort of got it, in an "Into the Woods" kind of way.  If it passes inspection, and if we have something decent with which to frame it, I am donating it to a fundraiser on Thursday.  A fundraiser for the new clock tower.

UPDATE:  I wrote the above a couple days ago.  We framed the painting (8" x 24") in a hammered copper and sent it away for the fundraiser.  I forgot to take its picture wearing its clothes.  If nobody buys it, I will happily take it back.

So here is what happened on Monday.  I slept late, as is my Monday ritual, then went to Kalispell to meet with the accountant to get our tax returns.  By the time I got home it was raining a bit, and I had a hard time convincing myself to run in the rain, instead of sitting on the couch reading.  The internal debate raged even as I was changing my clothes and lacing up my shoes.  Three miles later, Roxie and I were pretty proud of ourselves.  I refueled with chocolate (damn you, 70% off Easter candy).

Evening comes and, still riding my runner's high (although I'm pretty sure it was a chocolate high) I decided to get lots of things accomplished.  First I washed some dishes and in the process broke a lovely blue pottery bowl.  Damn.  Then I cooked some hot Italian sausage so I would have something for lunch this week.  I had two packages of sausage, and as I was unwrapping the second one I noticed an awful lot of blood on the bottom of the first package.  "Ew," I thought to myself.  "That's a gross, bloody package of meat and why didn't I notice in the store?"  Well.  Turns out the gross bloody meat was actually my FINGER, which I had cut on the blue pottery bowl when it broke.  Man, what a bleeder.

Moving on.  The dishes were washed and the food cooked, so I stepped out of my kitchen and into my studio (HA!) to finish my WHEN I RUN painting.  And of course I accidentally knocked over a small bottle of silver paint.  Pooh.  Stupid moment.  In my infinite wisdom, I decided the best recovery method would be to scoop the paint back into the bottle, but wouldn't you know -- when you tip the bottle AGAIN, even more paint falls out.  Duh.  Stupider moment.  Got that cleaned up with the aid of a palette knife, but still wasted a bunch of nice silver paint - I was covered.  Not ten minutes later, when I had moved on to another piece, I ran into the issue of an almost empty tube of paint.  Now, tubes hold thicker paint than bottles -- heavy body vs. fluid, for instance. But this does not mean it is a good idea to vigorously shake the tube, while open, to get the last bits of paint out.  Nope.  Not at all a good idea.  In fact, I would call it a stupiderest idea.  Lucky for me I noticed the giant blob of paint that landed on my nice clean jammies.  Red paint.  Would have been funny if I hadn't noticed, went to bed with wet red paint on my leg, and awoke to find myself apparently bleeding out.

Here is the first piece I am doing for the Everything Cherry show the Museum is holding next month.  The show is part juried art show and part historical exhibit. 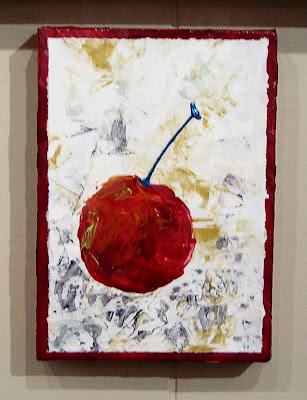 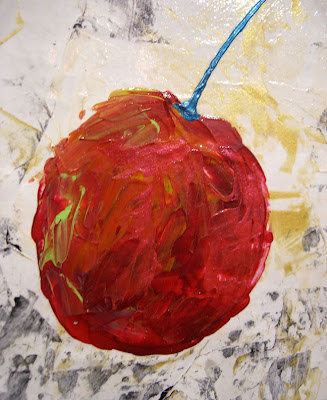 The cherry is very ... round.  I want to call this "Bada Bing" but it's not dark enough.

P.S.  I have a post-it note on the wall above my desk with this quote from Oscar Wilde:


To live is the rarest thing in the world.
Most people exist, that is all.

I might have to do another running painting that says WHEN I RUN, I LIVE.
Posted by ckv at 6:06 PM No comments:

Let me start by saying I just checked my stats and I have had a total of 3,461 page views on this blog since its inception.  I'm quite sure 3,400 of them have been me, and the other 61 are my mom.  Well actually, that's not quite true, because 5 have been from Latvia and 103 have been from Malaysia.  Huh.

About a week ago a friend told me I need to paint something that would inspire him to run.  I thought about it a lot, because I too need some inspiration.  And it was really hard to put into words how I feel when I run.  I had a distinct feeling in my head (you know, your basic super fabulous awesomeness) but the first phrase that worked for me didn't seem to portray the entirety of that super fabulous awesomeness.  So I starting writing the back story.  Which then became a poem.  Which I realized this morning I could whittle down to a haiku.  But ultimately I decided the painting stands on its own, distilled down to the very essence of what running means to me.  And if you don't get it, it doesn't matter.  You don't have to.  I do. 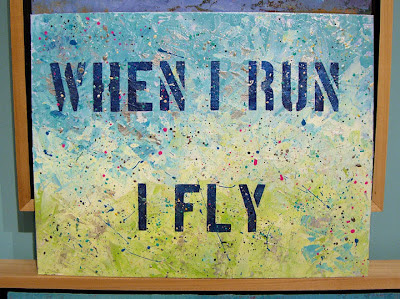 The good, the bad and the purple

Roxie and I had a lovely Easter.  We got up at a reasonable hour so she could pee and have breakfast, then we went back to bed forever.  Awesome.  When we got up the second time, I had a handful of potato chips for Easter brunch, then we went for a three mile run.  It is pretty cold in my little house (which is fab-u-lous in the summer, but not so much the rest of the year) so I put on tights, a t-shirt, fleece pullover and my fleece hat.  Bagged the mitties at the last minute.  We got about a quarter of a mile into the run before I realized I was WAY over dressed.  I spent the rest of the day in short-sleeves and flip flops.

Monday was just as awesome, except I had to go shopping for funeral attire.  Poo.  Roxie stayed behind so she could play ball with Uncle Derek.  Later we went for a two mile walk.  That was good.  But I had intended to go for a three mile run.  That was bad.  We played ball again, and since I was having trouble sitting still, we went for another two mile walk.  That was good.  Four miles in no socks means I got a blister on the bottom of my right food.  That was bad.

I promised a piece of art for a fundraising event benefiting Ravenwood Outdoor Learning Center and my time was pretty much up since the event is this coming weekend.  Ravenwood is all about "getting kids outside for safe, hands-on learning adventures."  I have been in an artistic funk for the past couple of weeks and couldn't come up with anything I wanted to paint, so I went to Ravenwood's website looking for inspiration.  On their homepage I saw a hot link with this:  "Bring out your WILD CHILD at Ravenwood this summer!"  So this is what they are getting: 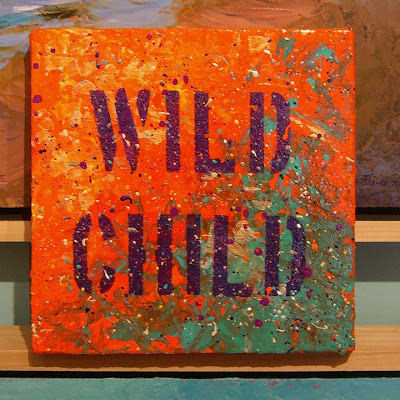 My letters got a little wonky, but I still like the way it came out.  And I spent a good part of the afternoon percolating on something else that hopefully will turn out with the feeling it has in my head.  Time will tell.

As a side note, when I put on socks last night I noticed some dark spots on my ankle.  Immediately I thought  "tick bites!"  When Roxie gets a tick bite it is a giant dark red spot on her belly because she has no hair on her belly.  I went into the bathroom to examine my ankle with a critical eye and discovered ... no tick bites.  It was splatters of purple paint.

I've got quite the pile of "questionable" paintings building up.  I need some inspiration, STAT! 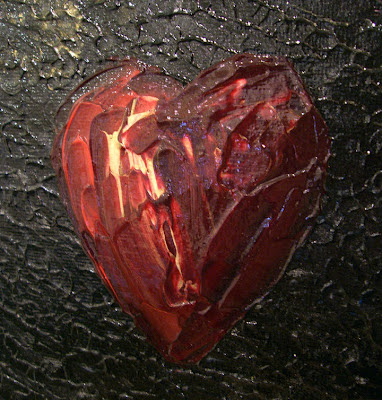