Nonna died last night.  We knew it was coming, but it was still a surprise.  She had a stroke on the 11th -- actually it was two, one in the morning and one later in the afternoon -- and lost the ability to speak and lost movement in her right side.  I went down to Missoula with Derek to see her two Sundays ago, suspecting the worst.  She was asleep when we got there, and looking at her I thought for sure her eyes would pop open and that she would jump right out of bed.  She looked great!  We sat with her when she woke up and stayed to meet the home health care provider the family was interviewing that afternoon.  I don't know how much of the conversation Nonna could hear - she has no hearing in her right ear and wears a hearing aid in her left - but I think she mastered the art of faking it years ago.  We left that afternoon feeling more optimistic than we did on the way down.

Last Sunday we made another trip to Missoula.  Again, Nonna was sleeping when we arrived.  She looked frail this time.  When I held her hand it was skin and bones.  But when she woke up she was more engaging than the week before.  I'm not sure how much of what I said she actually heard, but we ended up laughing - belly laughs - for about twenty minutes.  It was priceless.  You can share a joke without a single word being spoken, and sometimes those are the best jokes.  Nonna was rubbing my hand with her thumb the entire time we were there.

This week she had some good days and some bad days.  Derek and I were making plans for the trip to Missoula this Sunday, so it was a shock when he called last night at about 9:30 to say Nonna had died.  Although I wish I had the chance to see her again, I'm glad our last visit together was such a good one.  I want to remember her with a smile on her face, sharing a laugh, sharing a secret.  Everytime I saw Nonna she would say, "Here's my beautiful redhead," even if I looked my worst.  She made me feel special, and for that I will forever be grateful.

Ann Cipolato.  She packed a whole lot of living into 97.5 years.  She left her family with hilarious stories, wonderful memories and fabulous recipes, and I am blessed to have been included in that family.  Two weeks ago Derek's aunt Gigi and I were joking about me being a bad penny - I keep turning up.  I don't think Nonna would have had it any other way.

Have you ever noticed that your attitude changes depending on your footwear?  Generally I start wearing my LL Bean boots when we get our first snowfall, and I don't take them off until the snow is all gone in the spring.  This winter has been so damn curious weather-wise, but my head still says "wear the boots."  Today, however, I am wearing old running shoes.  What a difference it makes.  I am ready to GO!  Doesn't hurt that the sun is shining too.

Since I have such a GO! attitude today, I am determined to finish a project at work I have been putting off since November.  I started it on Saturday, but WILL finish it today.  It involves stitching down a very flimsy silk scarf that has been folded up for a zillion years, so the creases make it a curious shape.  I can't wait to have it done.

Nothing new on the painting front, except this, which is called Cartoon Kisses: 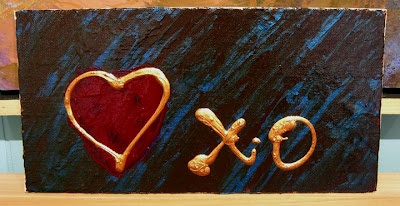 I am still in a slump.  I thought I would be all excited about the new paints I got last week (or the week before - whenever it was), but alas, no such luck.  I got nothin'.  Nada.  I didn't submit my entry form for the Hockaday Miniature Show this year because although the artwork isn't due until end of April, they needed the size and title of the piece by March 24th.  Meh.  I couldn't think of anything.  Maybe tonight I will just slap some paint around and see what happens.  I have another application deadline mid-April so .... we shall see.
Posted by ckv at 12:46 PM No comments:

When you just don't have time for a proper hello 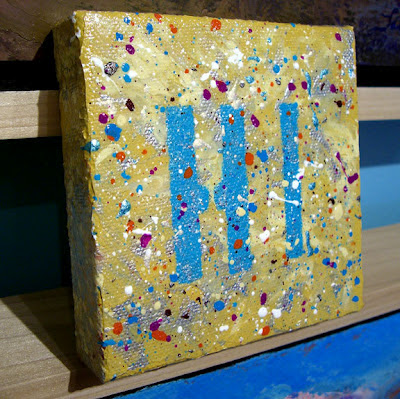 According to the calendar it is officially spring.  I'm sure this is why it has been snowing and windy for the past two days.  As a friend of mine wrote on facebook, "Spring weather sucks....  I miss the warm sunny days of winter!!"

Ever since my accident, reported in the post below, I haven't been able to paint.  That sounds high-drama, if you haven't read the post below!  I spilled some paint, turned it into a weird painting, and somehow it sucked the creative life out of me.  Temporarily.  I tried a little something last night -- we'll see how it turns out.

Since I have nothing new to share, here are a couple of old things.  REALLY old. 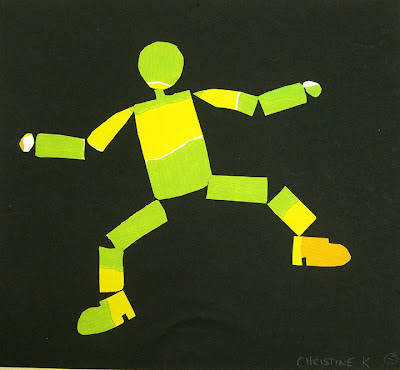 His body parts appear to be cut out from wallpaper.  This is from fifth grade. 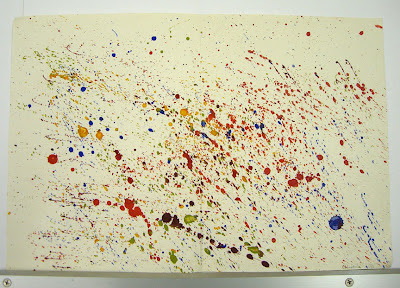 And apparently I have been channeling my inner Jackson Pollack since the sixth grade!
Posted by ckv at 3:46 PM No comments: 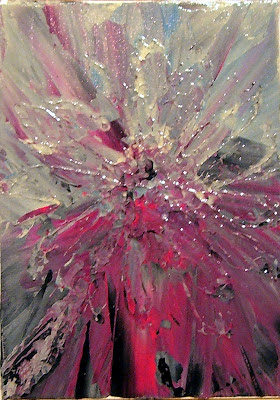 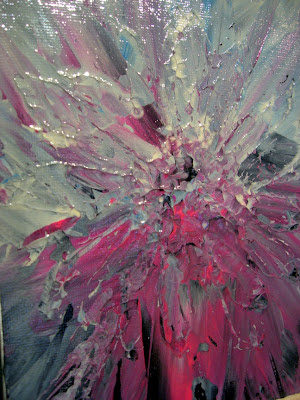 On Monday I went to a hobby store in Kalispell looking to see if I can make an idea in my head materialize in real life.  It is doubtful, because it involves something like graphite pencil and varnish.  But I bought about two dollars worth of experimental stuff, and since I hate to put a paltry amount like that on a debit card I also got a tube of paint.  And this is what happens when you buy a new tube of paint, open it, and it explodes all over.  Sigh.  The new color is some kind of grey that looks darkish blue.  I didn't want to waste what fell out of the tube, and these were the other colors I had out on my counter.  Frankly, these are not my colors at all.  Ironically, however, this painting matches what I am wearing today (discounting the black and white zebra-print fleece vest).  I don't have a name for this painting yet, but it is some kind of flower.  And for a while it will live in the "that's ... interesting" pile.

I tried to paint some more flowers last night and it was going really well right up until I ruined everything.  So I repurposed the canvas panel, then ruined it again.  This one is going in the trash when I get home.  Ergo, after some consideration, I have decided to share all the so-so paintings I mentioned a couple posts ago.  These are all infinitely better than what I produced last night!  First up is the piece inspired by a painting I found on Etsy. 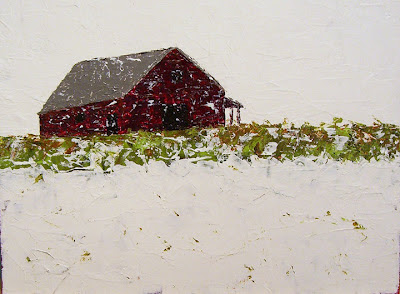 I haven't varnished this one yet because I haven't decided if it is a keeper as is.  There are many things I like about it, but I'm not sure I like it as a whole.

Second up is the original draft for my clock.  I don't know what happened here, but the original idea was based on a compass.  I was going to paint the background, then paint a compass rose in the middle.  The 12 was going to be North, the 6 was going to be South, etc.  I thought it was a very clever idea, but it got lost somewhere in translation and after mucking around for a while I ended up with a cool mingling of color and texture.  I call it "Wing and a Prayer" because it reminds me of a dragonfly wing. 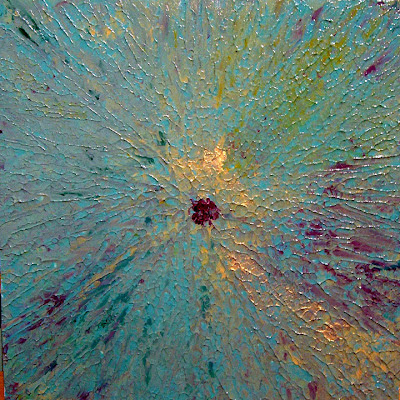 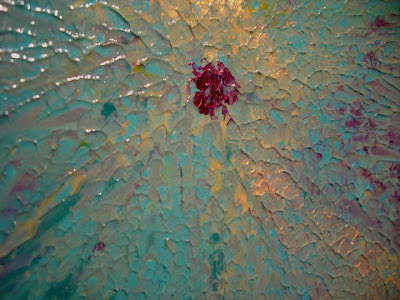 The first picture is the entire painting.  It is painted on a piece of very rigid foam-centered board so now it goes in the "this needs a frame" pile.

What else.  Oh yeah - here is the alternate painting I offered to Megan for the Take Back the Night Auction.  She chose the original piece, so this is now on my Etsy store. 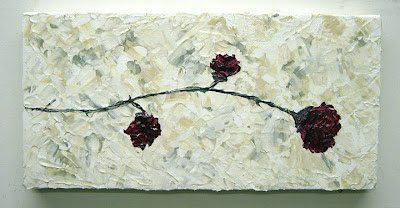 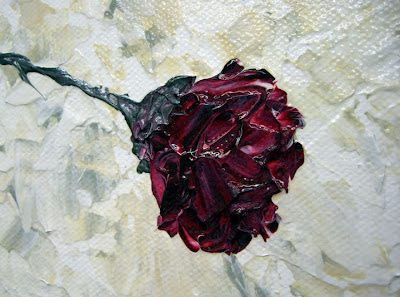 I like this one standing vertically, too.  I named it "Ruby Red."  Maybe because I just spent a week with a dog named Ruby.  Hey - I just realized - the dog's name is actually Ruby Rose.  I should rename the painting.  HA!

We are springing forward tomorrow and if the weather is any indication, we are springing right in to summer.  It could have been a shorts-and-flip-flops day today.  I bet the six more weeks of winter that Phil promised us will arrive mid-April.  Can't wait.
Posted by ckv at 7:30 PM No comments:

Time of the Season

Here is my clock.  My compass idea didn't work, so I switched to the four seasons.  Clockwise (heh heh), starting at 12, we have winter, spring, summer and fall.  Derek named it Time of the Season. 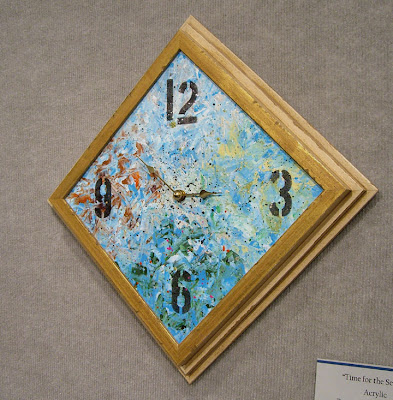 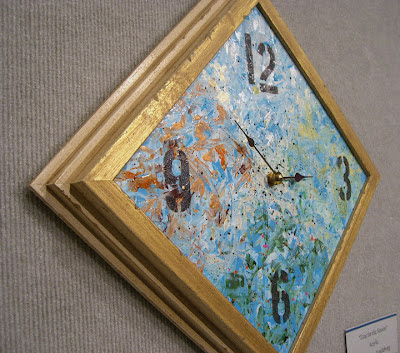 Isn't March the month that is supposed to come in like a lion?  Not so much here.  And not so much in Vermont, which is where I spent the first four days of the month.  With the exception of Sunday, which started with almost no snow on the ground but by the middle of the afternoon looking out the windows we felt like we were in a snow globe.  Fast forward a day and I got back home to no snow.  Today it is sunny and warm.  Craziness.

Vacation was a lovely break from work.  I ate too much bad food and gained 20 pounds, didn't bother trying to catch up with my burpee challenge (I am soooooo far behind), saw a great movie, went on a reconnaissance mission through Lamoille County, met Nacho - my cousin Mary Jo's friend from high school, got my hair curled, hung out with the wackiest kids I know, and bought a painting at my favorite Vermont art gallery.  It was a good way to spend a week.  Now I am home with my poodle-face, getting back into the swing of things.  Today was a day of playing catch-up; I finished nine of the 15 things on my list so tomorrow will be the same.  And I almost forgot - on Thursday I will get to see my clock!  Derek framed and assembled it while I was on vacation and since I am at work by myself today and tomorrow I won't get to see the finished piece until Thursday.