Hey look at that - two days in a row.  Five posts TOTAL for all of last year, and two so far this week.  I'm on a roll.  Mostly I'm here to point out that I did a little switcheroo with the info stuff over on the right side of this page.  I added a link to my Instagram and to my new website.  Woo hoo!  Did you know you can get a domain extension of .art?  I did, so I did.

I'm so fancy.  My website is going to be a place where I can create portfolios of different types of artwork.  It's for people who want to see purty pictures without having to weed through all the junk I write.  It does have a blog roll but I'm saving all the juicy stuff for here.  And all the non-juicy stuff, like this oddball: 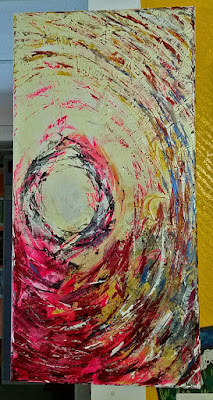 Sorry for the crappy photo.  The painting is called Find Your Center.  Sometimes when I can't figure out what to paint I just pick a color and start.  I have no plan, I just start.  This canvas is 12" x 24" and it is loaded with texture.  I painted it over the course of about two weeks - adding color, waiting for it to dry, adding more color, making marks, covering up color, waiting for it to dry, making more marks.  Then one day it told me to stop.  I'm probably the only person who will like it but that's okay since I painted it for me.  Satisfied customer.

Anyway, I digress.  If you zippy-do over to my website you will see a portfolio called Through the Trees, and if we are friends on Facebook or you follow me on Instagram you will recognize this one: 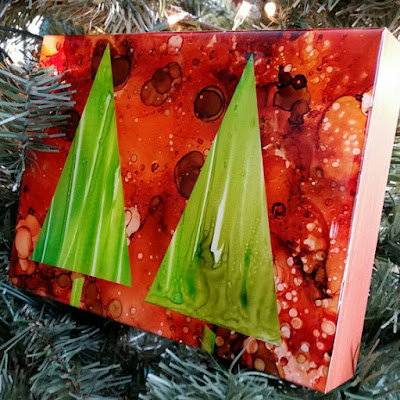 Love love love.  More on this process to come, and wait until you see the piece I finished over the weekend.  I'm beside myself, it is so cool.  I will tell you all about it as soon as I attempt some Photoshop magic - the camera in my phone is pretty good but it doesn't register metallic hot pink.  And you REALLY need to see this metallic hot pink....
Posted by ckv at 9:01 PM No comments:

Out with the Old

And here we are, hurtling through a new year already.  The year 2017 ended with my best good girl squished in the couch: 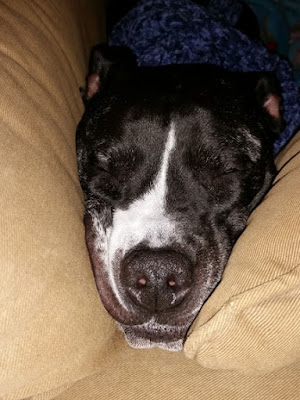 my best little freak sitting still for one minute: 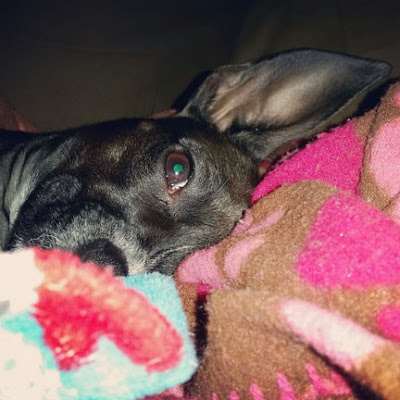 and a pink Christmas tree: 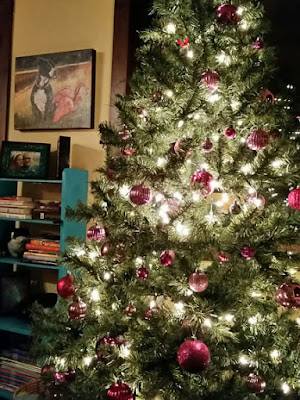 The new year started with BUTT FREAKIN' COLD weather, but I don't want to talk about it.  It's over, it's done, we can pretend it never happened.  I'd like to say I can't wait for spring but that would fly in the face of my theme for 2018, which is:

More on that in a minute.  At the beginning of this month I scrolled back looking for the State of the Self that I wrote last year and discovered something interesting:  I wrote it TWO years ago.  What the what?!?  Where did last year go?  Time to revisit everything in that post, which you can find right here.  Remarkably, it is all still true.  With the exception of the work drama - that's old news.  And the Miracle Whip, which has been replaced by salsa.  But the rest -- all still true.  And that is a sad state of affairs.  Or, rather, a sad state of the self.

I have a fierce dislike of New Year's resolutions but in the interest of being a BOSS and TAKING CONTROL I was all set to resolution the shit out of this year.  Until I came to my senses and admitted that "shock and awe" was a clear path to failure, so I whittled my list down from ten major resolutions to five intentions.  What's the difference, you ask?  I wasn't sure - it just sounded right.  It felt better.  And turns out, after a quick Google search, I'm not the only one who thinks so.  A search for "resolution vs intention" turned up a crap ton of results and to save myself the trouble of explaining it in my own words, I have borrowed from the September 4, 2017 blog of Matthew Trinetti:

Whereas a resolution is "a firm decision to do or not to do something," an intention is a gentle reminder to get back on track.

Where goals focus on achievement and doing, intentions promote a state of being.

That's EXACTLY what I want to do and today - on the 21st day of the month - I can honestly say I'm killin' the game.  My overall theme, or intention, for the year is to Be Present and I mean that in two ways.  First, I want to spend less time in a state of anticipation - essentially wishing my life away.  Appreciate and celebrate moments, events, achievements as they happen instead of immediately pushing them to the side in anticipation of the next one.  Example:  constantly thinking I can't wait for spring takes me out of the present, which minimizes a lot of great moments.  My dogs love playing in the snow and yesterday Roxie threw herself into the snowbank and slid down the other side on her back.  It was hilarious to watch.  The other night it looked like someone had sprinkled glitter on my lawn - the snow was actually sparkling.  And a few nights before that it was so cold the sky was ridiculously clear and you could see forever.  There's no better way to sweep the cobwebs from your mind than to breathe deeply of the cold winter air.  But when I'm wishing for spring I stop noticing the good in the now because I'm too busy anticipating the potential good in the future.

Second, I want to be more mindful.  My five intentions for January are all related to personal health and well being which, for me, includes art.  And reading - normally I'm a voracious reader (side note to Ivan - my Kindle is recharging at this very minute) but over the last year I ended up devoting a terrific amount of my free time to YouTube videos.  Mostly art related so I give myself a partial pass, but I've watched so many Buzzfeed videos I could probably name 75% of the people who work there.  That's embarrassing.  That's a whole lot of wasting my life.  That's a whole lot of NOT being mindful.  So my January intentions involve mindfulness with eating, exercise/meditation, art, reading, and spending.  The details aren't important but I love knowing it's not a matter of success vs failure.  I have my list written down and it's a good feeling to know it's just a "gentle reminder to get back on track." 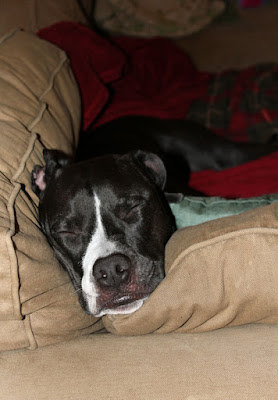