It's getting to be the time of year when leaf peepers are out in force, scoping out the Vermont foliage.  I know this because I saw all of them in the parking lot of the Ben & Jerry's factory on Thursday afternoon.  I, however, was the only one there who was waiting for the AAA guy to fix my dead jeep battery.  All in all it wasn't a terrible way to spend an afternoon, although Rabbit may disagree.

In other September news, I've got two more of my Aretha word paintings finished: 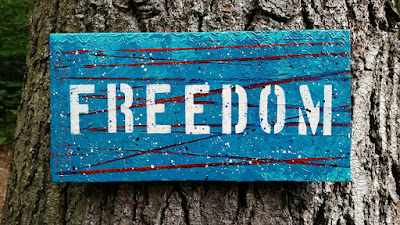 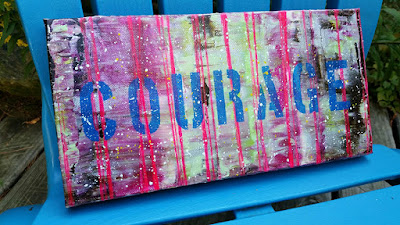 I've been posting these on Instagram and the Blues Brothers Official account has "liked" at least two of them, so there's a life goal achieved that I never knew I had.  Three more in this series to go.

Today I varnished the Best. Painting. Ever.  Okay, maybe not the best, but I really really love it.  I started out only knowing what colors I wanted to use - brown, red and something peachy.  The paint sat on my table for a couple of days while I thought about it, hoping a design idea would come to me.  I got nada so had to wing it.  Here's the final result: 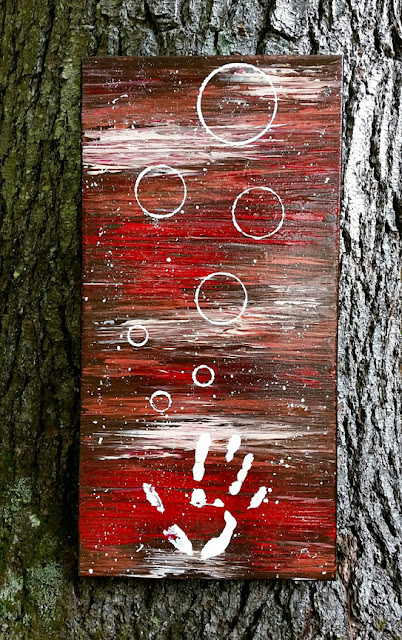 And here's how it all went down:  staring at a blank canvas can be intimidating and since I had no idea how this painting was going to evolve I hoped getting the first bit of paint on there would spark something.  Anything.  I started with the brown (TMI side note: this particular brown paint is not as thick as my fave, which is like brownie batter, so after spreading the first layer around the sides of the canvas with my fingers I looked like a proctologist who forgot to wear gloves).  On went the rest of the brown, then the red, peach and a dark rose gold (the bits that look like copper in the photo).  Some blending, some texture and a sudden fierce desire to put a white hand print at the bottom.  The white circles came out of nowhere but as soon as they were on the canvas I knew the painting was called "Letting Go." 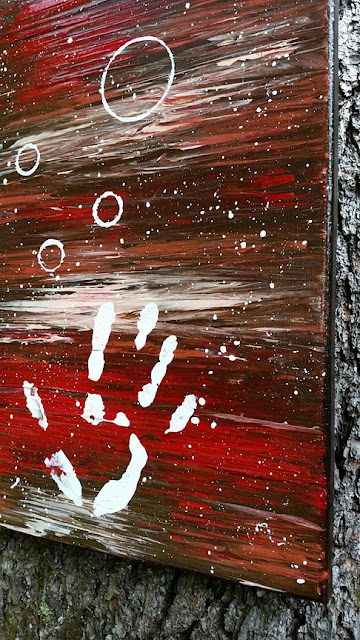 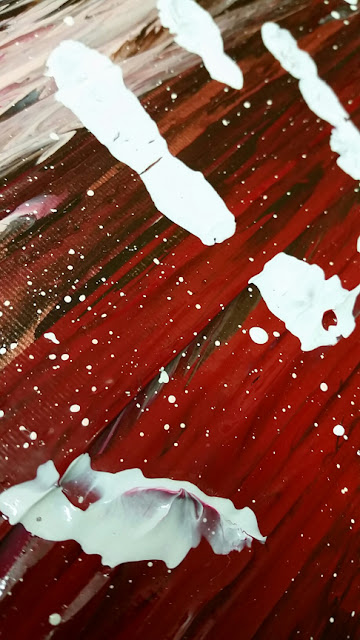 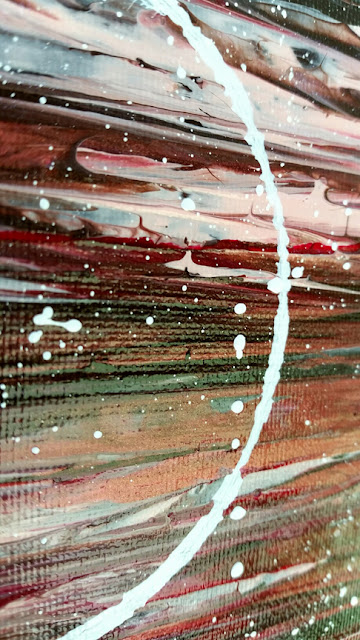 It's taken me a long time to be comfortable with having canvas texture visible in the final piece.  In fact, most of the time I still don't like it and with heavy body paint and a palette knife I can cover it easily.  Not so here but that's okay - there are places where you can see the weave of the canvas and other places where the paint is so thick I had to wait two extra days before I could add varnish.  Final shot, complete with professional photobomber: 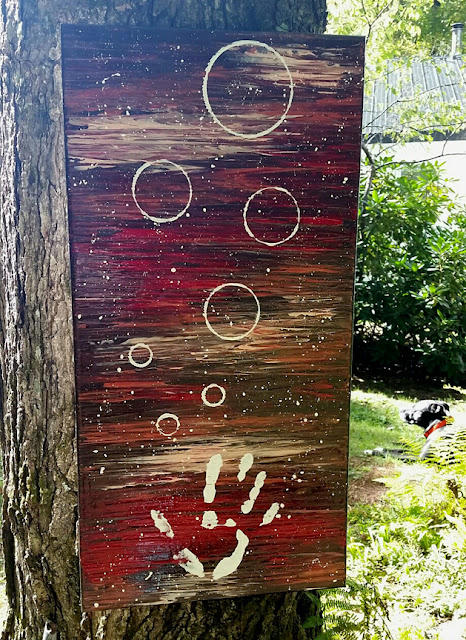 Today was one of those breathtakingly beautiful fall days in Vermont.  The sun was shining, the sky was startlingly blue, the temp was perfectly in the 60s, and none of the farms near my house have sprayed liquid fertilizer in at least a week.  So weird that five days ago the temps were in the low 90s and the humidity was unbearable.  Tomorrow is supposed to be more glorious weather and we're going to work on perfecting our hammock napping technique. 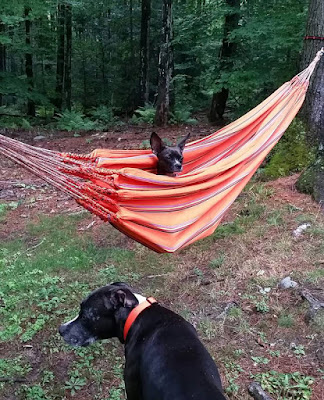 Today, however, we went on a road trip to Costco and walked three miles and painted.  Yes, we painted.  I started a new word series called Aretha - there are two so far with five more to come: 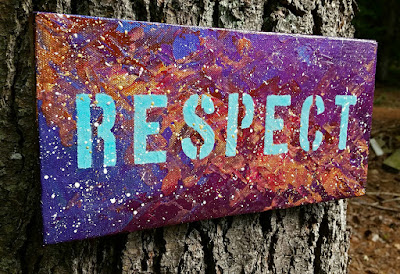 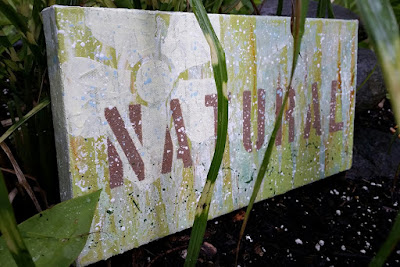 The background for the third one went off the rails yesterday and I thought it was a goner, but I fixed it today and now can't wait for it to dry so I can add the rest.  While I'm waiting, I finished this guy: 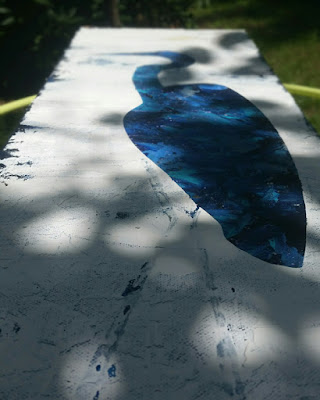 So right before I left on a 12 day family vacation last month, instead of doing all the millions of things I needed to be doing, I pulled out this canvas that had been sitting around for ages.  Seriously, I painted the blue background so long ago I can't remember when it was.  I made the template for the heron at the same time, then set it all aside.  Until the day before vacation when the last thing I should have been doing was mucking around in white paint.  Did it anyway.  In this picture the white is still wet, hence his almost non-existent legs.  I had to wait for the paint to dry before I could peel off the masking fluid.  Did that, went on vacation, came back, looked at it every day, a couple more weeks went by, couldn't decide what to do with it.  I left it to percolate and painted RESPECT.   Then painted the background for NATURAL but didn't like the way it looked so I transferred some of the color from that one to the heron (which helped both pieces) and let it percolate some more.  Several layers later, and today he's done: 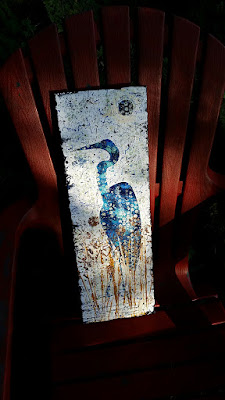 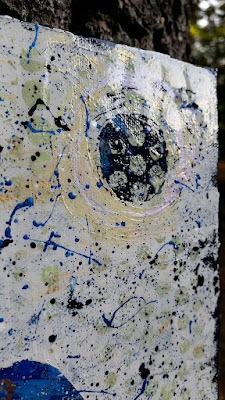 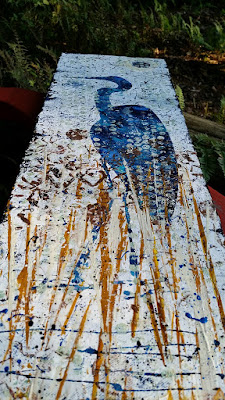 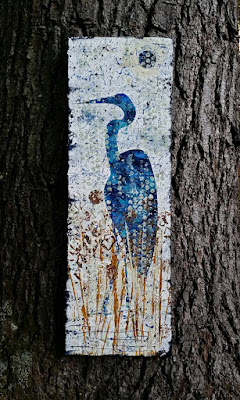 I honestly thought he was going to end up as a blue silhouette with just the rough textured white around him but he felt naked.  Here's a side by side of mid vs end: 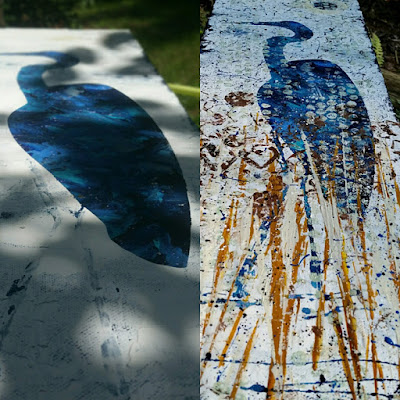 Yep, surprised me.  Looks a bit of a mess here but in real life there are layers and texture and shiny shiny and interference paint around the moon and in the bird -- it's all good.  Now he needs to tell me his name.

In other news, I planted some more color out front.  It was a weird summer - some things bloomed that I've never seen before, some things grew like weeds (maybe they ARE weeds) and I missed most of my lily season while away on vacation.  If I get my shiz together I will post some pics but in the meantime, always remember that everything looks better with a poodle in the background. 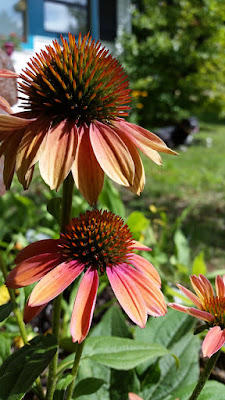 Or in the foreground. 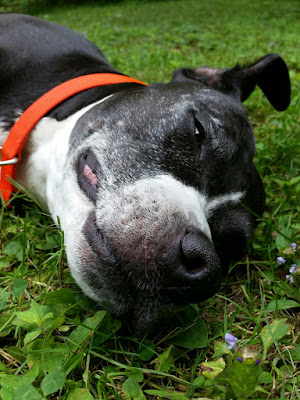