Yeah, I don't know what happened here.  It turned into some funky lotus flower thing.  It's in the "questionable" pile for now. 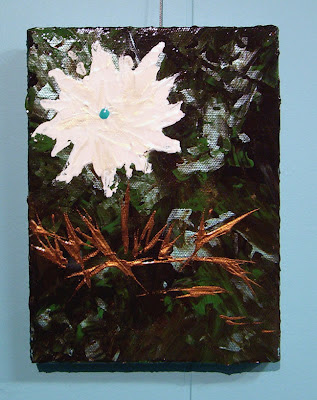 We decided to take a three day weekend, starting on Saturday.  Mental health days.  Yippee!  Woo hoo!  I can't wait.  Three days of sleeping until whenever and not taking a shower and vacuuming the jeep and cleaning my kitchen and beginning the October process of purging crap and loading a bunch of music on my ipod (I know, I know -- finally) and hanging out doing a bunch of nothing.  And painting.  Lots of painting.
Posted by ckv at 3:03 PM No comments:

Here is the second version of Autumn Colors: 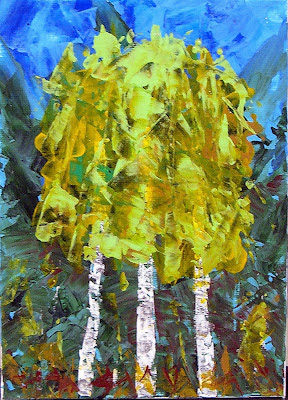 I like this one better than the first, so I can't wait to see how version 3 comes out.  It is in the works.  I would like to paint this, or something similar, BIG.  WAY big.  That would be fun.

My new-found wealth (see last post) will be going towards paying off my laptop and starting my camera fund.  I can't wait.  It will be my Christmas present to myself, although I hope to get it before Christmas.  Maybe in October.  And then hopefully the pictures I post on here will be better quality, eh?

Happy first day of Fall!  It was also Christine Vandeberg day at Frame of Reference today.  One of my pears sold this morning -- I think it went to Boston. 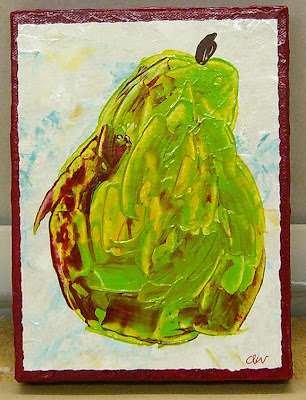 "Raspberry Pear."  I'm thrilled this sold, but sad because it is one of the paintings I was going to have made into notecards, but I never had a good photo taken.  Oh well.

Later in the afternoon, six more of my paintings sold.  Yes, you read that right.  SIX MORE!  James and Fred are my new best friends.  They took home my favorite painting, "The Pond." 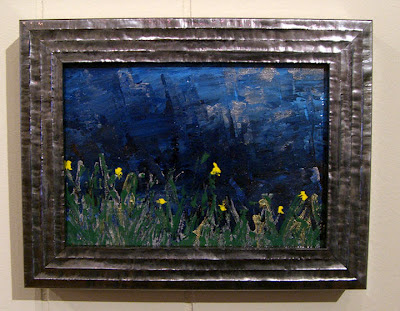 They also took this Valentine: 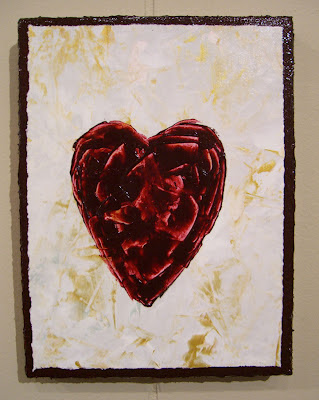 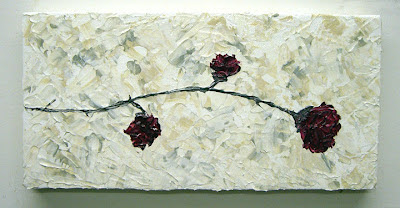 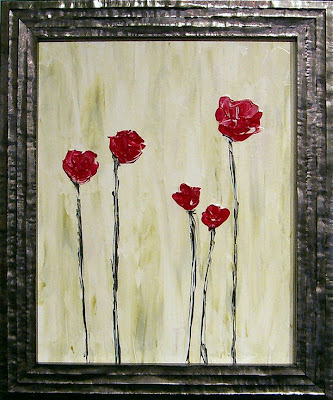 Hmmm.  What else.  Oh yeah, I had a tree piece called "Signs of Spring II" that was similar to this one, but framed floated on a bright purpley-blue suede mat instead of white. 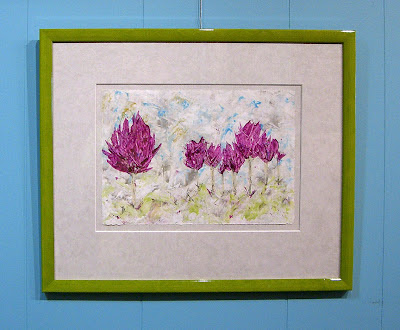 It had the same white rice paper top mat and the same lime green lacquer frame, but apparently I never took its picture.  Pooh.

Last but not least is another piece of which I have no picture.  Except this - it is the one on the top right with the purple trees. 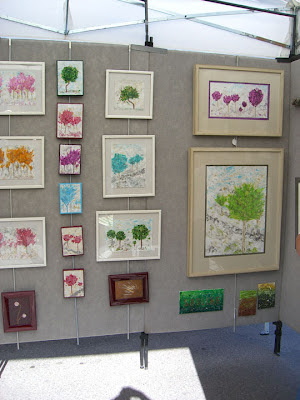 I named it "Lavender Lollipops."  I love this piece too and had forgotten all about it.  Derek pulled it off the artwork storage shelf and ... poof!  Away it went.  I still hope to get a decent picture of it.  James is opening a gallery down the street and is going to hang a bunch of my tree paintings.  Woo hoo!  I am thrilled and honored but secretly quite nervous!  Fred has a gallery in New York and I want him to hang one of my paintings there so I can say my work is shown in New York.  Wouldn't that be funny in an awesome kind of way?

Today was also an epic day for another reason, but I can't really talk about it yet.  It has to do with the "drama" playing out at the Museum.  I feel very good about an action we took today, and all I will say is this:  a friend posted a long quote on Facebook this morning by Maya Angelou.  It was a bunch of "I have learned..." things, one of which I have heard before but which spoke to me today.  "I have learned that you can't go through life with a catcher's mitt on both hands because sometimes you need to throw something back."  Well, today I threw something back, and I feel GREAT.  (I know none of you are going to have a clue what I am talking about, but in the months and years to come, when I look back at this post, it will make me smile.  And maybe give an evil little laugh.)
Posted by ckv at 10:40 PM 1 comment:

Here is one that was on its way to the trash pile.  I experimented, and saved it.  Now I'm going to try and recreate it, with a slight color shift. 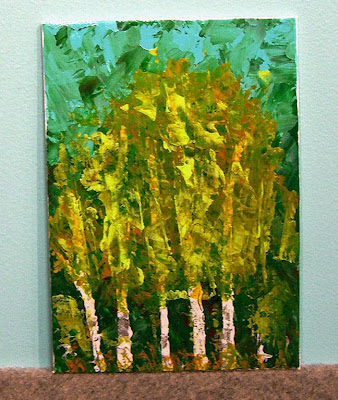 There is a stand of trees that looks just like this near my house.  Really.  It's true.  Roxie and I saw it when we walked four miles yesterday, which is more exercise than we've gotten in one day since ... well ... two weeks ago.  In an attempt to fix my slugitude (that's a word, right?), I set another goal for the rest of September, but I'm not going to tell you what it is.  I'll let you know on October 1st if I made it.

Have I mentioned that I am President of the Board at the Museum again?  Uh, yeah.  I don't want to talk about that, either.

Burning question of the day:  how long after the "sell by" date can you cook hamburger and not kill yourself?  I'm gonna live dangerously; if you never hear from me again have someone check the hamburger package in my trash and you will have the answer.
Posted by ckv at 7:15 PM No comments:

In the interest of getting out of my own way, I finished two more paintings last night.  The first is another tiny landscape. 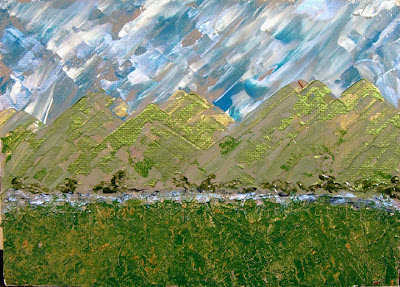 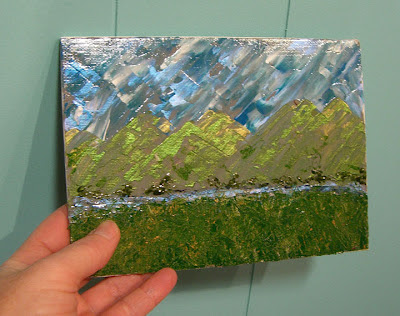 This is the painting that had a poodle hair stuck in it, which I did remove before the paint dried although I figure I can charge more for the paintings that have poodle hairs in them.  Right?  Also, when I finished it the first time, I didn't like the foreground.  It was grey and copper and didn't look that great.  Now -- chevere.

And here is the second one, which still needs a name. 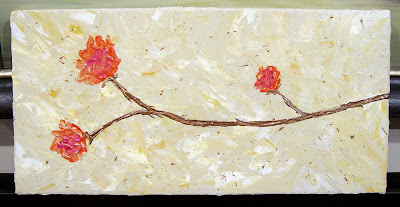 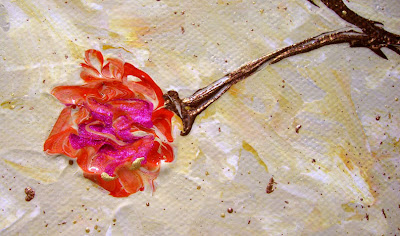 Next up, hopefully, is the one I was so excited about finishing in July.

(As a side note, my landlords have rented out their house for the month of September, and the youngest of my four new neighbor kids is Lydia, who is probably eight years old.  She came over and played with Roxie forever last night, and now I have another song stuck in my head.  "Lydia, oh Lydia, say have you met Lydia, Lydia the tattooed lady...."  Inappropriate, I know, but at least the version in my head is being sung by Kermit the Frog.)

My fortune from dinner last night says, "No obstacles will stand in the way of your success this month."

That's great news!  But I know of one rather large obstacle that has been in my way so far.  It stands five feet, four inches tall and has red hair.  Grrr.  I made all kinds of plans and set all kinds of goals for the month of September, then went right into winter hibernation mode.  My ass is becoming one with my couch again.  We haven't been running.  We haven't even been walking.  That is sad and pathetic.  I have painted a little, but not much.  Granted, life is good and I am not upset with myself, but I know I would be happier if I would just get out of my own damn way.  So that's what I'm going to do for the rest of the month.  Get out of my own damn way.  So there.

Derek got me a birthday present.  It arrived today. 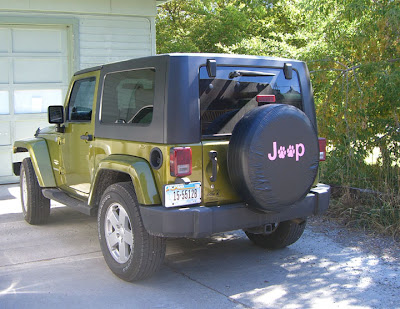 Awesome!  (It's the spare tire cover, in case you can't tell.)

And here is a painting that may or may not make the cut.  I like it, but I think it might be too flat.  All the paint I used is iridescent - the background is silver and the blue in the sky, two colors of green in the mountains, the gold and pupley in the foreground are all shiny. 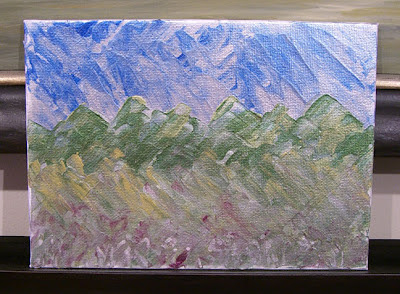 I like shiny things.  In fact, while this painting is in the "waiting" phase, I temporarily called it "Shiny Happy Mountains."  And now, of course, I have that song stuck in my head.  God bless REM.
Posted by ckv at 3:52 PM No comments: 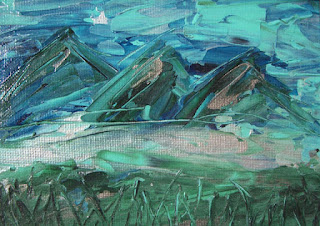 We packed it up today and sent it home with a lovely couple from Australia.  They had to take it without the frame because you are not allowed to bring wood into Australia.  Bugs, and all that.  I am sooooo international now, even more so than I was last month.  Heh heh.  I love Australian accents although, in the interest of full disclosure, he is originally from England and she is originally from Sri Lanka.  When Derek told them I painted this one, she gave me a hug.  I don't know their names, but they were lovely people.
Posted by ckv at 3:28 PM No comments:

My apologies in advance to those of you who are my friends on Facebook - you get to see some of my pictures twice.

Labor Day weekend was a stunner here in Western Montana.  On Sunday we left work early and went for a drive.  Topless. 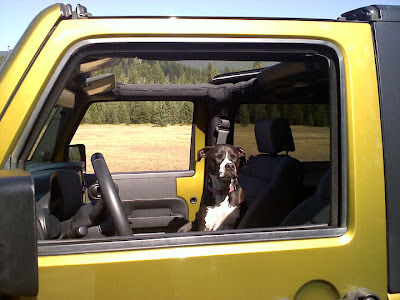 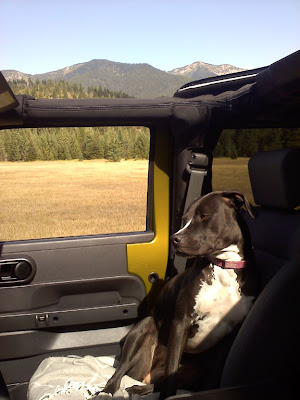 We left the back half of the roof on - it's a two-person job to remove it, and you have to disconnect some stuff.  Plus, Roxie isn't a wind-blowing-in-her-hair kind of dog.  She spent most of the ride in the backseat.  Until I stopped to take pictures.  Then she got in the front seat to pose.  I love the second picture above.  Love.

Speaking of pictures, I have added a camera to my wish list.  As soon as I finish paying for my laptop, I'm going to start saving my pennies for a new camera.  When I was in Vermont I used my sister and brother-in-law's Canon, and it was most excellent.  I took some really great pictures with that thing.  Having been a dedicated Olympus fan for the past 30 years or so, it's hard to think about changing brands, but I have this in my shopping cart on Amazon.

And speaking of jeeps, first of all I intended to get up early this morning to drive down to Polson to register the jeep.  Didn't happen.  My temporary registration expires on the 8th.  Second of all, this is the color palette we are painting with currently: 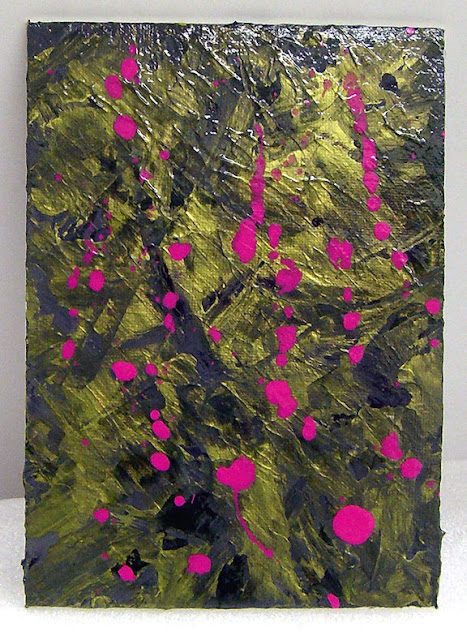