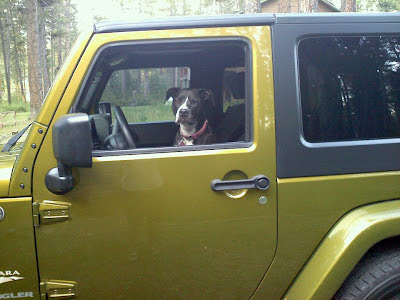 This one really shouldn't count towards my July total because I painted most of it ages ago.  I found it in the closet the other day, and decided I liked it enough to finish it.  In keeping with the "names of small Montana towns" theme, I called it Belfry. 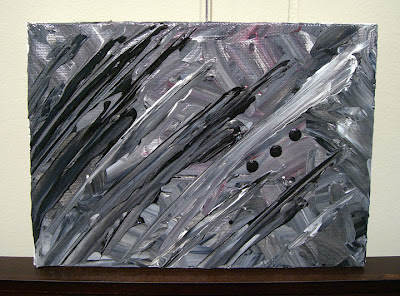 I finished the fourth Hello Kitty flower, and realized I never posted pictures of the third one. 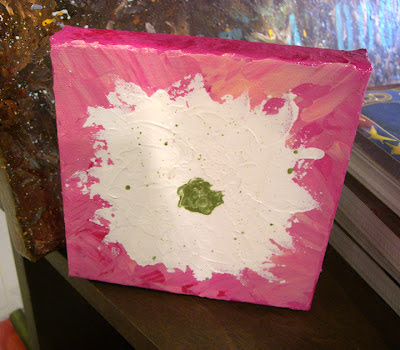 And here is the fourth one, which still needs a final coat of varnish. 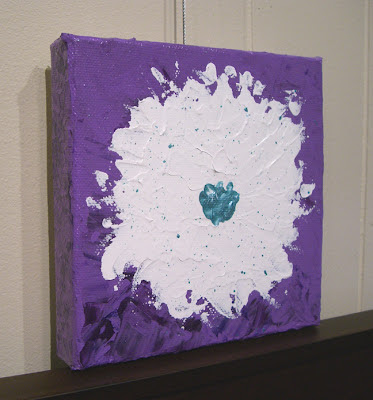 So, here is the Hello Kitty Four Square: 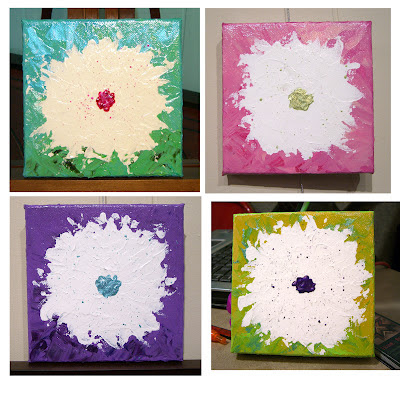 No current report on my stats for the month except I will say I hit the 100 mile mark a couple days ago.  Woo hoo!  That is all.
Posted by ckv at 4:28 PM No comments:

You know when you get a song stuck in your head and it drives you absolutely bonkers?  That happens to me a lot when I run, but I'm not fortunate enough to get the whole song.  I just get one line.  Over and over and over.  "Devil with a blue dress, blue dress, blue dress, devil with a blue dress on."  Try that on for size.  A couple months ago I had a line from a Supremes song, but luckily now I can't remember what it was.  Whenever I give myself a mental pep talk and mention that every step I take puts me one step closer to home, Sting is right there with me.  When a friend posted pictures of a sailboat on facebook, that day I had, "Come sail away, come sail away, come sail away with me."  But the worst?  Wheels on the Bus.  If you do not know this song, consider yourself lucky.  During my run on Monday, just to shake things up a bit, after the wipers on the bus went swish, swish, swish, I had the driver on the bus say shut your mouth.  Oh the things we do to amuse ourselves.

I also play a lot of mental games when I run.  I don't pay any attention to what my feet are doing; I'm not a heel-striker so I just let my feet do their thing.  When I get tired, I do the old, "just run to the next telephone pole" routine, or I count fence posts as I run by a field.  (You should see what I do when I'm on a treadmill.)  I know I'm about at my limit when I get all fidgety.  The other day, at the end of an 8-miler, I pretty much looked like a catcher giving elaborate signals to a pitcher.  When that hapens I think about what my arms are doing, since they are the ones driving this train.  I pretend there is a handle attached to each of my hands, and the handle is attached to a wheel, and I am turning the wheels.  I don't pick my feet up much when I run, so sometimes I pretend there are flames shooting out of my heels - that's my power output - and I concentrate on lifting my feet a bit more on the back end of each foot strike.  And sometimes I pretend it's my legs that are wheels, and that keeps me focused on my form.  I was thinking this the other day and suddenly realized that all the voices in my head were singing again.  You guessed it.  "... all through the town."
Posted by ckv at 2:04 AM No comments:

I have only run twice this week, but both were 8 milers.  No short runs, no medium runs, 6 miles of walking. I am a bit behind in the squat department, but I will catch up in the next couple of days.  The #4 painting I was so excited about is still not finished, so that one gets bumped down the line.  The new #4 is the second Hello Kitty flower. 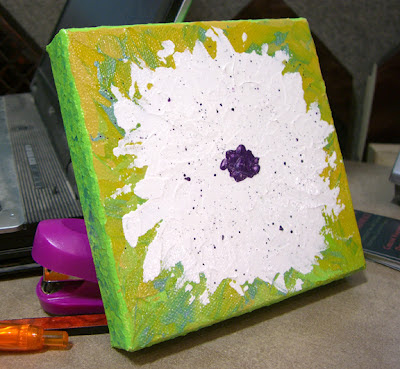 As a side note, that little pink stapler is a piece of shit.  Don't buy one.

The #5 painting is Derek's birthday present.  I finished it early because I thought it might need a steel frame, and the turnaround time on those is a bit longer than on normal moulding. 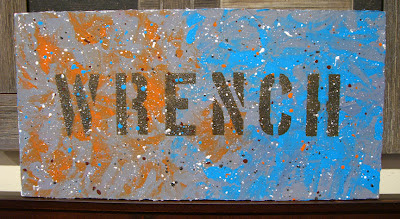 Derek picked up a third job this spring "consulting" for some friends who were opening a new shop here in the Valley.  It is called Montana Adventure Sports, and they sell bikes, stand up paddle boards, all the requisite accessories, some clothing, and in the winter they will have skis and snowshoes.  Getting back to his roots, Derek is spending time working down at MAS "wrenching" in the bike repair department.

The painting started out ok, but as soon as I added the MAS signature colors (or my interpretation thereof), it all went to hell.  So I played around with some texture, which didn't help any, then decided to let it dry and paint over it later.  That thought lasted about five minutes, so I scraped the paint off, then put it back on, added a few other colors, messed around for a while, then smoothed it all out and added the MAS colors again.  And I liked how it turned out.

The third Hello Kitty flower is up next - the background color went on last night.  And hopefully today I will also finish the one I think will be hilarious.  That will be #6.
Posted by ckv at 2:08 PM No comments:

My neighbor has been haying. 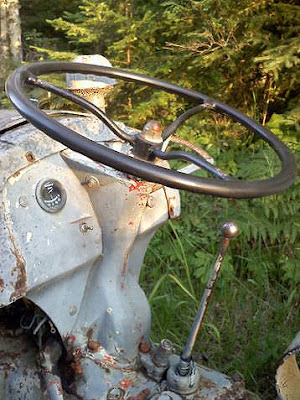 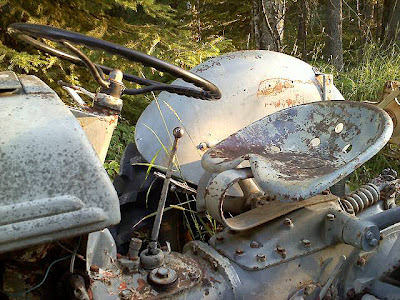 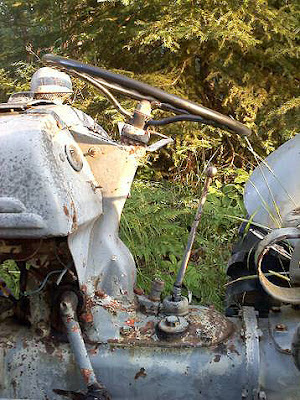 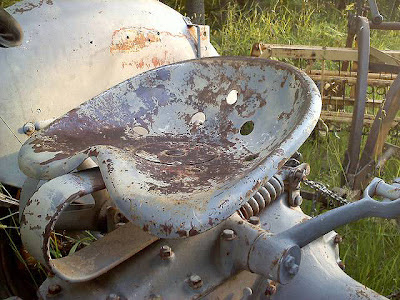 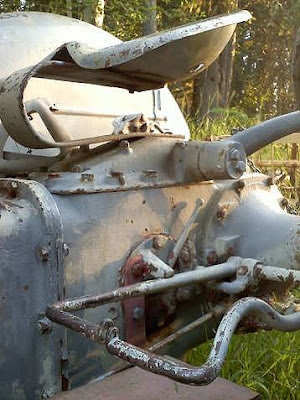 Our air conditioner at work crapped out today.  Gettin' toasty in here.  And that's about all I have to report.

I have only painted one new piece and I keep forgetting to bring it to work to take a picture.  It's another Hello Kitty flower.  My creative juices have all dried up and I blame it on a feng shui issue at home that involves a burned out light bulb.  I tried to be proactive and change the light bulb, but the problem appears to be a little more complicated.  Busted electrical nonsense, or something like that.

Roxie and I went on an eight mile run on Monday.  We did a five mile loop, stopped to get a drink at home, did a two mile loop, stopped for another drink, then did the last mile.  I told her she could bag out on the last mile and just stay home, but she didn't want to.  She's a good runner.  Our total mileage for the month is 63.

I bought a lap top yesterday.  It was more money than I wanted to spend (considering I didn't want to spend any), but once I download some software and figure out how to use it, my life may become a bit easier.  I will be able to do all my Museum PR stuff at home, rather than at work when I am busy with work stuff.  I had a brief moment of technological ineptitude when I couldn't get the damn thing to turn on, but we've overcome that obstacle and today I will test drive a free program that is comparable to Photoshop.

Lastly, here is a picture of the project I agonized over at work.  Client picked it up today and I am very happy to never see it again.  It's a silk scarf and the client wanted it to look like it was just thrown down.  Luckily, he was quite pleased with the outcome.  I'm just glad it's done and gone. 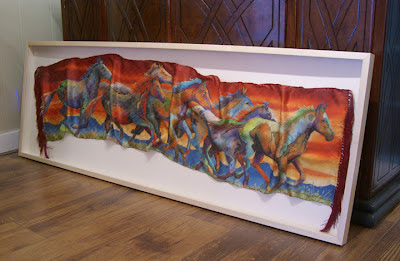 Here is my report.  The first eleven days of July have produced 45 miles (34 running), 250 squats and 3 finished paintings.  Yesterday was a seven mile day.  Woo hoo!  Longest run of the year so far.  Actually, that's my longest run in about 22 months.  I'm thinking of running the Two Bear Half-Marathon again this fall, but don't want to commit yet.  My friend Corey and I ran it two years ago, and for some reason it totally kicked my ass.  Slowest half marathon time ever.  So last year I registered for the full marathon.  Yeah.  Whatever.  This year I want to run the half again with two goals in mind:  end the race feeling good, and beat my last time by at least 10 minutes.  In the meantime, I'm building up some mileage, and my legs are very, very happy.

So.  Paintings.  Here is the second finished piece of the month: 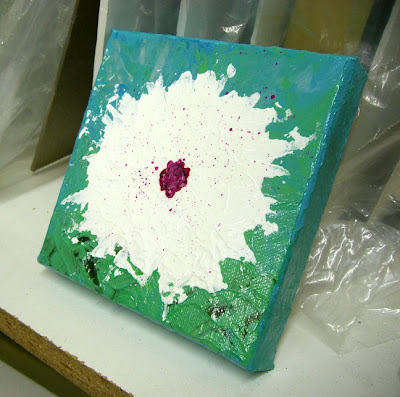 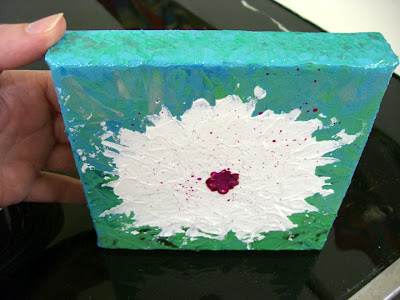 I call it a Hello Kitty flower because it reminds me of Hello Kitty and it is only 5" x 5".  That second picture is at a weird angle so you can (hopefully) see the texture in the flower.  I'm going to paint a few more in different colors and hang them as a group.  It will be awesome and you will love it.

This is the third new one: 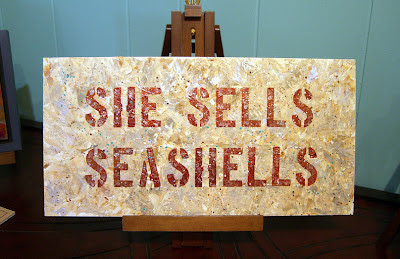 Wait until you see painting number four....
Posted by ckv at 3:08 PM No comments:

Here - I put a green frame on it, which helps it look a little more interesting. 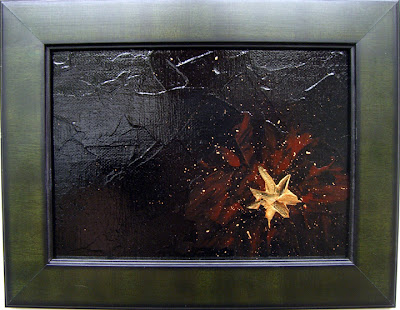 I love it when the wild daisies are blooming.  They are EVERYWHERE. 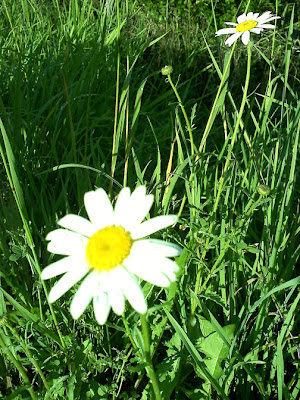 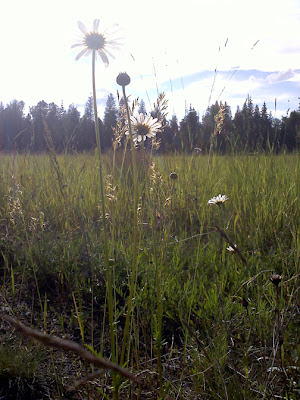 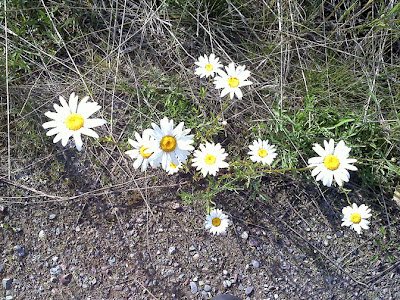 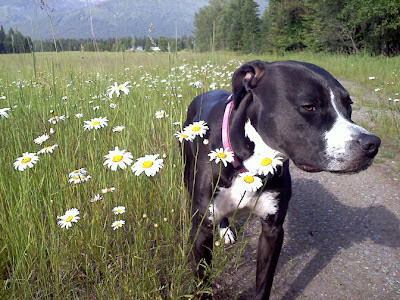 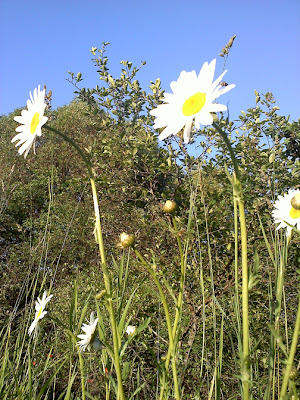 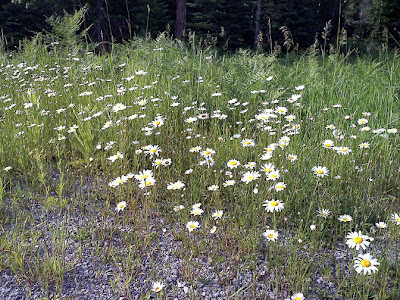 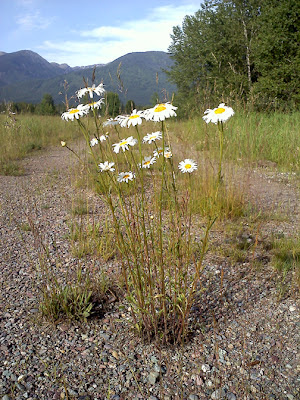 The turtles are everywhere too, but I didn't take pictures of them.  Same with mosquitos.  Forget about waterboarding - torture for me would be getting locked in a dark room with a bunch of mosquitos.

So, five days in to my July challenge and I have one painting done, I have 22 miles under my belt (19 of them running miles) but I'm only at 90 squats.  Still not sure if I am going to add the push ups - if I do, it won't be today.  Today I have a broken neck.  Sort of.  I can't really turn my head to the left.  Chiro appointment this morning helped, but then someone came in to the gallery and gave me a one-armed hug and got me right on the swollen part of my neck that is broken.  Anyway, today's long run is probably out, and so are push ups.  I have a date tonight with Biofreeze instead.

Here is the first July painting, although it is so simple it probably shouldn't count toward my goal of ten.  It has no name. 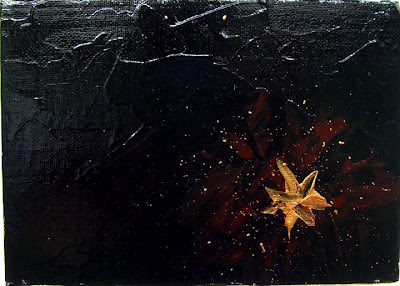 This is the first time I've used a heavy body black paint.  Just messing around.
Posted by ckv at 6:19 PM No comments:

My birthday month ended with a bang.  We hosted an artist's reception on the 29th and it was craziness all over.  I cannot believe today is already July 1st.  So, briefly, I have set for myself a July challenge.  During this month I will finish 10 new paintings, I will run or walk a total of 100 miles and I will do 1,000 squats (building a better butt, one squat at a time).  I might add push ups to that 1,000 category - the jury is still out.   I'm starting all of these things today.

I also booked my plane ticket today for the big, monumental, larger-than-life family reunion in August.  I fly Wednesday, August 15th to Vermont, and back to Montana on Tuesday the 21st.  Hinesburg will be on ukulele overload that weekend.  It will be awesome.