I still have some catching up to do on here from last month but I've lost all my mojo so it has taken a bit longer than I expected.  I will start with this:  remember that marathon relay team I was on?  Here we are, post-event: 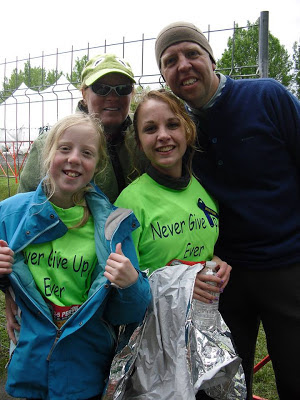 It was a grueling day.  We left the house at 6:20 a.m. and got to Burlington by 7:00ish.  Walked up to the starting area in rainy and 42 degree weather.  Cold.  Windy.  Icky.  The race didn't start until 8:03 a.m. so there was plenty of waiting around.  In the cold.  And wind.  And rain.  Abby was in charge of the first leg of the race - 3.3 miles - and Johnny ran with her.  She was a rock star.  Johnny continued on with the second leg - another 6.something miles.  He wanted to say he ran the distance of a half marathon, so he ran with me up to the 13.1 mile mark.  Or, I should say, he ran but after my first 4 miles or so I stopped to walk.  Johnny was a rock star.  I was responsible for the third and fourth legs of the race - 11.something miles - and it was brutal.  Everything that could hurt or break, did.  Right knee, right hip, left knee, left hip, lower back, piriformis, tops of my feet, bottom of my left pinky toe.  Delaney was waiting an awful long time for me to get to the start of the fifth and last leg.  She was a rock star.  I don't know what our team's official time was, but we didn't care about time - we just wanted to finish.  (Delaney even stopped for about 10 minutes to take off her jacket and re-pin her bib onto her t-shirt.)  It was, for the most part, a miserable running experience but I'm so proud of our team and I would do it again next year.  Both Delaney and Abby wore their official race jerseys to school the Tuesday after the race. 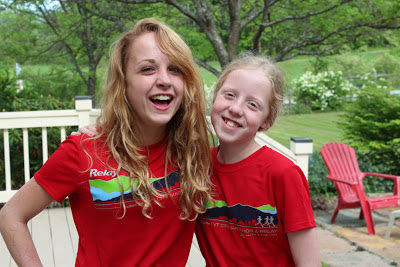 On Memorial Day we went with Evan and three of his fellow Cub Scouts to replace the flags in the Hinesburg Village Cemetery.  I couldn't get a good picture of all four boys together, but here is my favorite picture of Evan: 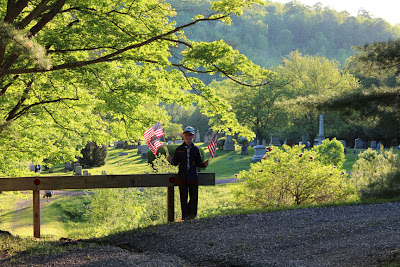 Last but not least, I wouldn't want Liam to feel left out, so here he is, in all his teenage glory.  This is an awesome picture: 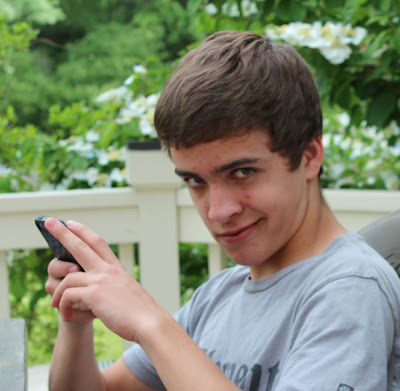 Awesome.  What else.   I went to Killington for a couple of days and saw my dad for the first time post-brain tumor diagnosis, radiation and all that nonsense.  I got to see the plastic mask he had to wear during his radiation treatments.  Creepy, in a "Friday the 13th" kind of way.  Dad was on his best behavior but, of course, a couple of days after I got back to Montana he went back to the hospital for three nights and four days.  Craziness.  Someday I'd like to see my dad's medical file - I bet it is so huge it takes up an entire filing cabinet.

Speaking of wrapping up things, I wrapped up several of my paintings last week.  Two went to Connecticut, one went to California, one stayed here in Montana and one is almost on its way to Switzerland.  Most of the paintings were purchased by my wonderful family.  I have been getting loads of support and encouragement from my family regarding my art career, which probably means I should start painting again.  It's been a few weeks but, as I said at the beginning of this post, my mojo is gone.  Getting it back is on my To Do List for this week!
Posted by ckv at 8:12 PM