So as you know, for the past seven or eight weeks my mojo has been a total no show.  Here's what I think happened.  I was mildly frantic getting ready for my vacation - I had been procrastinating on a few things at work that I knew would be a pain in the rear, so ended up doing them the night before I left.  That would be stitching down three football jerseys for shadowboxes.  I was in Vermont for a week.  I got home to find a minor flood in my bathroom.  In addition to being a crazy catch-up week at work, it took forever to figure out why my sink was leaking and how to fix it (thanks to a very helpful man named Doyle at my local hardware store, I can add plumbing skills to my resume).  Then it was my birthday.  The day after my birthday my dad went back into the hospital for three nights and four days.  I've also had some setbacks regarding my "hope and dream" plans regarding my move to Vermont.  I'm not quite ready to slide back down into the pit of despair, but I've had to give myself several pep talks in the past weeks.  And although painting is one of my happy places, I haven't had the right creativity to get to that place.  I tried, and ended up with a couple of things just about good enough for the trash.  Bleh.

So I gave myself a new motto.  I have a pink Post-it note on my bathroom sink that says MAKE BETTER CHOICES.  This is most specifically related to food choices - I gave myself a 10 day challenge to eat clean.  When I cut out the junk, I feel a ton better (no surprise there).  And I sleep better.  And hopefully it well help my mojo come back because I have more energy.  You can only spend so many hours a day glued to the couch reading, even if it is the latest John Sandford book.

Anyway, I did paint something passable last week.  Another sheepy. 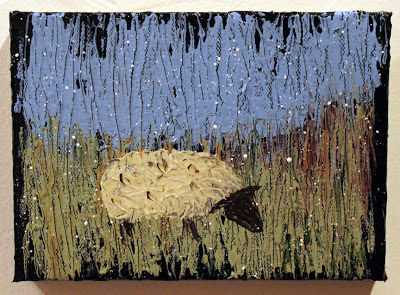 If this ends up as a keeper, I'm going to name it "Lone Ranger."

Two days ago I needed to just get some paint on a canvas (or on my clothes, or on the floor - anything would be better than nothing), and I ended up with this little abstract piece. 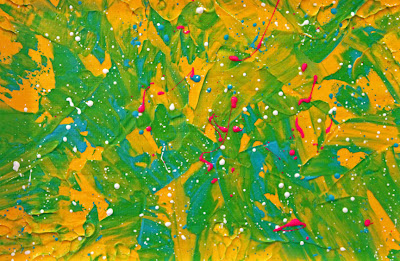 I'm calling it "Expect the Unexpected" and for now it lives in a white lacquer frame, like so: 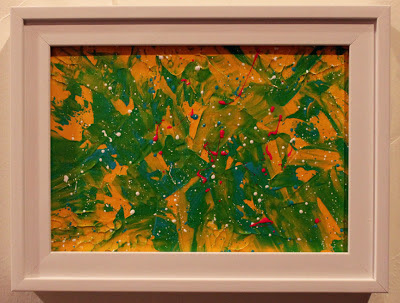 Yeah, I know, in this picture it looks pinky.  But it's white.  Kitchen art - matches the fridge.

Speaking of none of that (except the kitchen part), I had a tragic experience last night.  Today is Last Fridays in downtown Bigfork, and I was trying a new recipe that came highly recommended by some clients.  Carmelized bacon.  I know, right?  How could that possibly be bad?  This is Ina Garten's recipe and it sounded like something I would eat for breakfast, lunch and dinner.  So I put tin foil in two baking pans, set wire racks on top, cut an entire package (1.5 pounds) of thick-cut bacon in half and put the strips on the racks, then smeared them totally with a clever mixture of pecans, brown sugar, salt, pepper, cayenne pepper and maple syrup that I whizzed up in the food processor.  Into the oven for 25-30 minutes until browned but not burned.  Well.  Let me tell you what happened next.  I washed the dishes, and sat down on the couch with poodle and John Sandford.  About 12 minutes later I noticed it was getting a little hazy in my kitchen/living room.  I checked the oven to see if maybe there was a dead squirrel in there that had caught on fire (you never know), but nothing.  I took out my fire extinguisher and read the directions (safety first).  Then I saw smoke coming out of one of the burners.  Called Derek and he told me that's how the oven vents, and all the smoke was because I was cooking (read "burning") sugar.  I have the ability to create ZERO cross-ventilation in my wee home because the only two windows that open are separated by an entire wall.  So I opened the door and waved a painting around trying to clear the place out.  When I took the bacon out of the oven, I have to admit it really didn't look appetizing.  But the recipe said to transfer it to a plate covered with paper towels while it was hot, and it would crisp up as it cooled.  If it was cooked enough.  But not burned (burnt?).  My bacon was showing a little char.  And felt floppy.  Not a good combo (in anything, really, not just bacon).

New paragraph.  Finally.  After a couple more chapters of John Sandford, I test-drove the bacon.  It.  Was.  Gross.  Can you believe I just said that about bacon?  Total fail.  I never thought it would be possible to have a bacon fail.  And what a tragic waste of 1.5 pounds of my favorite food.  I'm betting it will still smell like a diner at home when I get there late tonight, too.

So there you have it.  That's all I have to report.  If you decide to try and make Ina Garten's recipe (google it), let me know how it comes out for you.
Posted by ckv at 5:49 PM