House to Home, Volume Three - Welcome to the Trouse

Trouse:  Urban Dictionary defines trouse as "a term utilized in the real estate appraisal industry to describe a trailer which has been added onto and may or may not resemble a site built home."  Trailer + House = Trouse.  Welcome to Vermont.

My house is a combo platter of a trouse and a stick-built house, stuck together like a wonky duplex.  The trouse was torn down last week but here are some pictures I took on October 10th for posterity.  They start with the back of the house, which faces east, and go counter-clockwise. 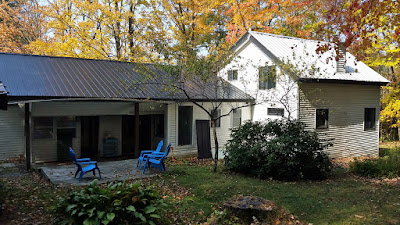 In the first picture you can see a black door resting against the back of the house.  If you look past the blue chairs you can see what looks like a hole - that's where the door was and there was a REALLY old kerosene tank in there that fed the trailer furnace.  My mom and I removed the door and used a reciprocating saw to cut the opening bigger so the fuel company could get in there to pump out and remove the tank.  When the trailer was just a trailer the tank was outside.  Trousification (I just made up that word) put the tank under cover and behind a door.

Fun fact:  the guy who came to pump the tank discovered a screw in the bottom of it.  He figures there must have been a pin hole in the tank so someone (Yankee ingenuity?) stuck a screw in it and siliconed the crap out of it to plug the hole.  He said he's heard of it being done but never seen it, then he took a picture. 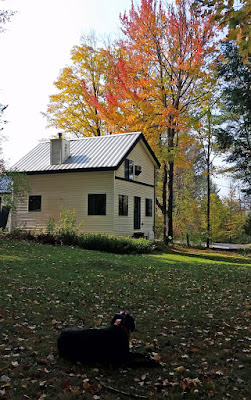 This one is taken from my thinking chair. I have a little fire pit and two chairs over in the back corner - my thinking chair and one extra for a thinking guest. The part of the house shown here is the stick-built part which dates to about the mid-1980s. That's a non-functioning chimney which I would like to have removed in Part Two of house renovations which is several years out. There was another kerosene tank outside here between those two back windows. It had a makeshift roof which almost blocked part of the dining room window. Not attractive at all. It looks so much better with that tank gone. 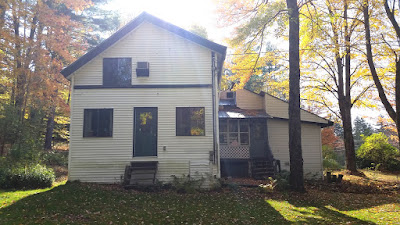 This next one is the north side of the house. Yes, it totally needs a little stoop which may or may not happen with this reno. Usually I care a little more about cleaning the pollen or mildew or algae or whatever it is off the bottom of the siding but all that vinyl is coming off so I let it go. You will notice from this angle the abomination that is the trouse-to-house attachment. It's crazy. 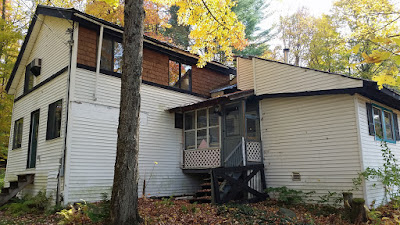 I like to say the trouse was built from lattice and windows. And I'm not joking. The place where some siding is missing on the house is where the roof of a storage lean-to was attached. We demoed the barnwood walls of the storage space probably six years ago and my mom meticulously salvaged all the boards because I thought they were cool. I've been storing them in my garage and they will be repurposed in the new build. The roof and support posts came down a couple of years ago.  Another fun fact: whenever snow slid off the metal roof and landed on the lean-to metal roof, which it did a LOT because welcome to Vermont, the whole house shook like crazy.  Marginally scary.  Actually, not gonna lie, majorly scary.

Here's the front of the trouse - it faces west. I painted the window trim a couple summers ago - everything in my house that's not nailed down is painted that turquoise color.  And, apparently, some things that ARE nailed down. This was the first year I've been here that I did not plant any annuals. I was expecting the demolition to begin sometime in August so it didn't seem like a worthwhile way to spend money. Turns out demo was two months late and I got my "dirt under the fingernails" fix transplanting a crap ton of plants I wanted to save. More on that later. 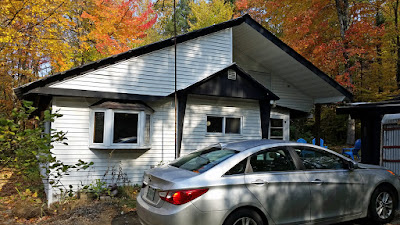 This picture is taken, obviously, from my driveway (oh hello loaner car) and you can really see the original trailer. They even left the hitch there so it would be taxed as a mobile home. 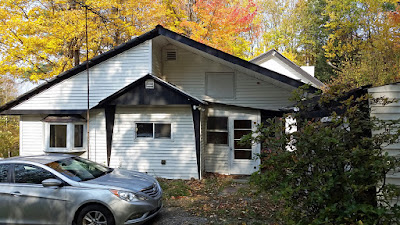 Sooooo much added on to that little trailer, and all the space that looks like it could be a second story is ... nothing. Empty space. It took me until last summer to get up the nerve to look behind that white door. In fact I sent my nephew up a ladder to do it, just in case that's where all the dead bodies are stored. Or giant spiders. But it was totally empty.
I am happy to say the view from all of these angles is totally different now. A pile of rubble is SUCH an improvement and it only gets better from here.
Posted by ckv at 4:19 PM