You could say I've been preparing for this massive remodel since the day I moved in.  Almost.  That was January of 2014, and I spent the first couple of months having my bathroom and kitchen rebuilt from the studs up.  When the snow melted we started on outdoor projects:  crappy fences, crappy little outbuildings - we tore it all down.  Now here we are six years later and demo is officially going to start, but first things first - there's still a bunch of stuff that needs to move out of the way.  Like the shit shed.

I went back through several years' worth of photos looking for a "before" image.  No luck, so I went all the way back to the first day I came to see this property.  Still no decent pictures of the front, but here's what it looked like from the side (May 2013) - this is from behind the garage, so not a view many people would see but it gives you an idea of what I started with. 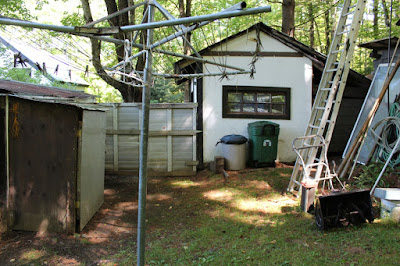 Nice, right?  The previous owners did clear out all the crap, and we pulled out the clothes drying rack, tore down the homemade storage box thing on the left that was attached to the back of the garage, and took down the fence between the garage and the shed.  Again, that was in spring of 2014.  A couple years later I wanted to minimize the obviousness (is that a word?) of all these white buildings so I painted everything that faced the back deck dark green, including the north side of the garage and the front of the shed.  I don't have any great pictures post-paint, but this will give you an idea. 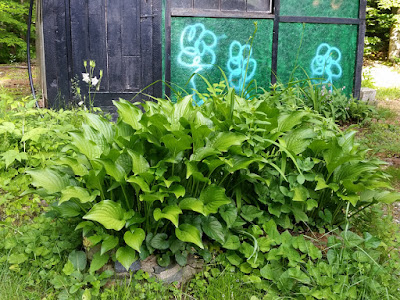 I have photographed a lot of artwork hanging on the lower right half of that wall.  Here's another picture from behind the garage that I think was taken in spring of 2017. 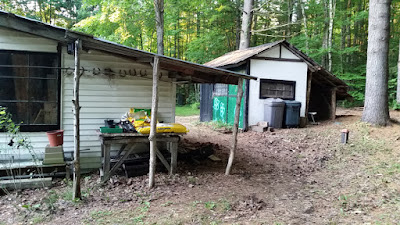 The green served its purpose but no amount of paint could disguise the crappiness of the shed, which was originally two buildings stuck together.  My neighbor tore down one half about five years ago, and that's when the remaining building officially became the shit shed.  I only used it as winter storage for some of my patio furniture - it was gross and musty and full of spiders.  Knowing that demo was going to become a reality this year, I started taking bits of the building apart, and that's when it really began to live up to its name.  This was the view from my hammock mid-June 2020: 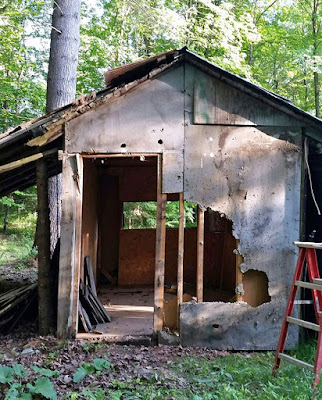 Gross.  A friend salvaged and repurposed the two window sashes but everything else is trash.  Here's my progress on July 4th. 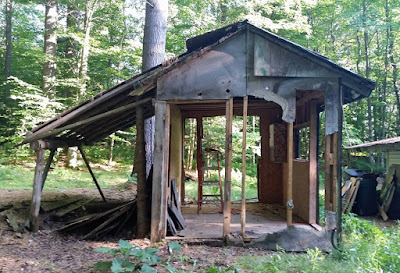 Still gross.  My mom came up on the 11th and although she doubted our ability, we turned that thing into a pile of rubble before the dumpster arrived on the 15th. 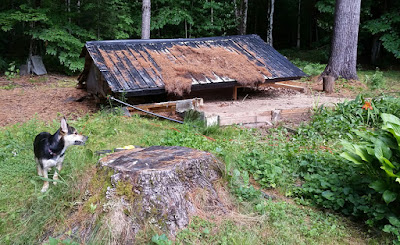 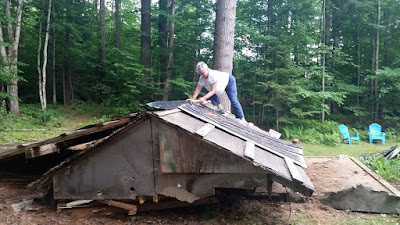 Adios, shit shed.  All that remained was an 8' x 12' dance floor.
Something else in the "first things first" category was the relocation of a LOT of perennials.  I transplanted a bunch of these from in front of the house but won't know if it worked until next spring. 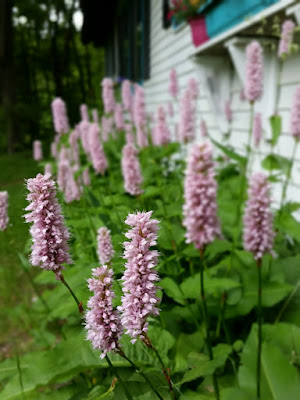 A nice couple came and dug out my strawberry dogwood tree hoping to give it a new life.  Fingers crossed it is successful.  All the rudbeckia along the driveway had to be sacrificed, which is a shame because it was so pretty when in bloom.  Here are some before pictures from last summer: 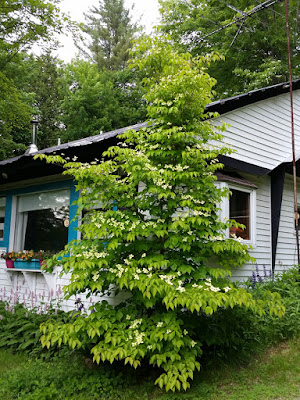 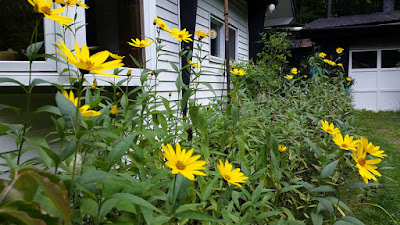 And here is the after, on September 20th: 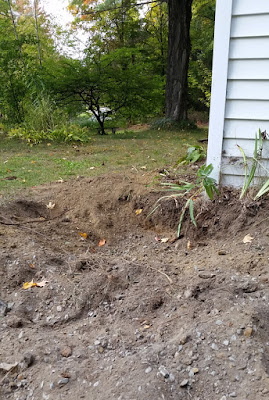 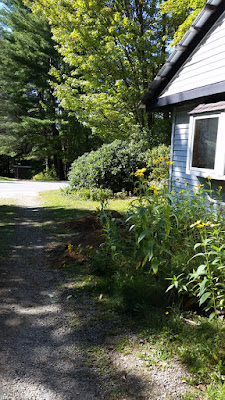 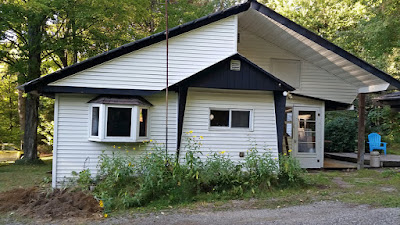 The spot that had me questioning my life choices was all along the north side of the garage.  It was FULL of hostas, day lilies, astilbe and ferns - a regular jungle.  Roxie loved it there. 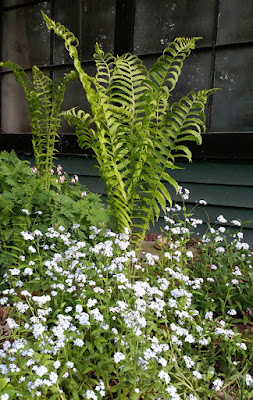 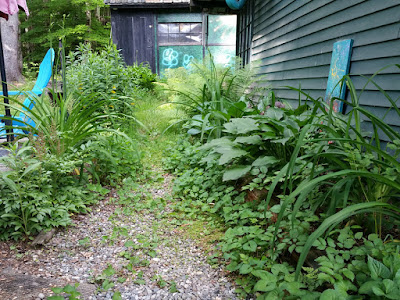 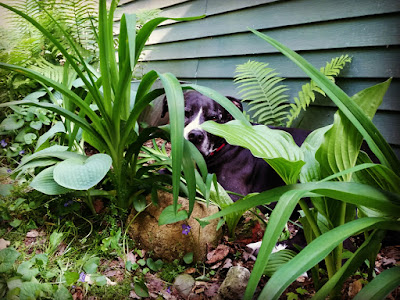 I decided to make a temporary flower bed for everything that needed to be moved but after days of digging and hauling a couple hundred pounds of rocks, that temporary bed is going to be permanent.  Here's how it looked on August 1st, about half way done:

And this is how the side of my garage ended up: 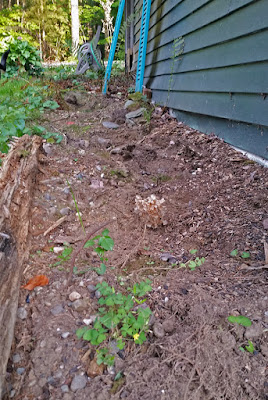 Speaking of the garage, I am VERY VERY VERY happy to see that thing go.  Another pile of junk.  It got so bad that in early August some part of the track broke and the door wouldn't roll up.  But I needed to get in the garage, mostly because my lawn mower was in there.  Let me tell you, the reciprocating saw I bought this year has been worth its weight in gold.  Pretty yellow Dewalt gold.  I removed two windows and cut myself a new door.  Boom. 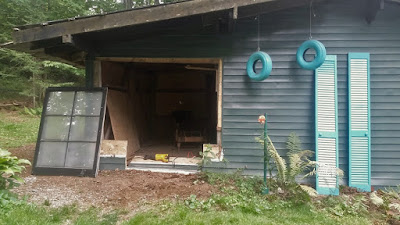 The same people who dug out my dogwood tree wanted to recycle the metal roof and a bunch of rafters from the garage.  They came over a few times on salvage missions; this is what the garage looked like on October 10th, about a week before serious demo began: 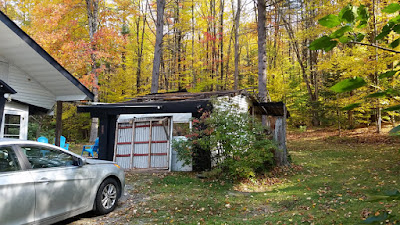 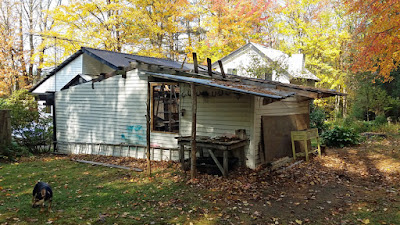 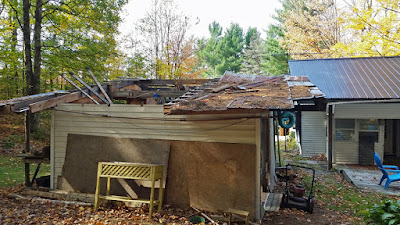 And that wraps up all the exterior prep work.  Next we will take a look inside.