Good news will be brought to you by mail.

That's a fortune I just found sitting on my desk.  I keep fortunes - they're everywhere around here - but this one in particular was sitting right in front of my face.  And funny enough, if you add an "e" in front of the "mail" part, this fortune came true!  Sometime in the middle of the night I sold a painting on Etsy.  It's the second painting I've sold on Etsy in the last month or so.  And both sales happened in the middle of the night.  My friend Brenda always talks about the "cha-ching" the Etsy app makes on her phone whenever she has a sale and I've wondered what it sounds like.  And now, two sales later, I STILL don't know!  HA!  Anyway, today I'm packing up this one and sending it to a new home in Bethesda: 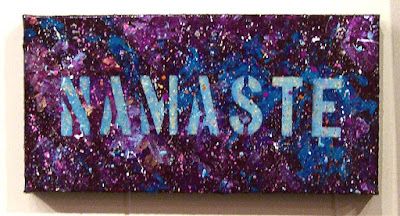 And the other sale was "Front and Center" which went out to California: 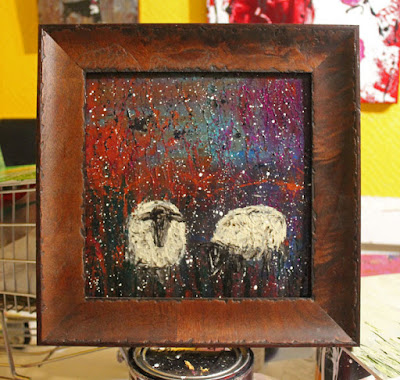 The woman in California sent me a photo of this piece hanging in a place of honor on her "sheep" wall.  So cool.

Now, lest you think everything is all sunshine and lollipops in Paint on Purpose land, I painted something new and it's not going to win any beauty contests.  Here's the close-up I put on Facebook: 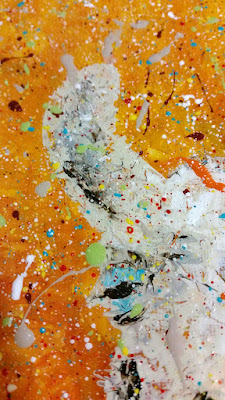 His name is "Party Animal."  He went directly to the questionable pile, without passing Go and without collecting $200, but now he is growing on me.  Gotta love a lemony llama. 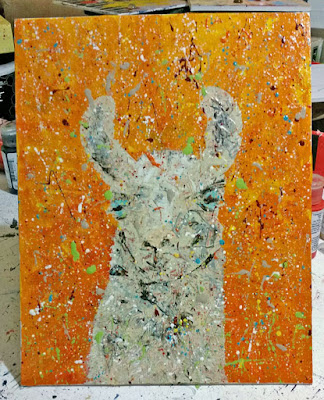 I have a couple other new little paintings that are mostly finished but are waiting for the final touches. Hopefully they work out a little better than the experimental model I tried a few months ago.  This is going to be another good lesson in not getting too attached to something while it is still in the "I could wreck it at any time" phase.  Oh, and speaking of which, I've got a bigger piece that isn't in that phase yet, but hopefully will be soon, and then hopefully it makes it out the other side.