First days of May

I love my new kitchen.  The only thing that would make it better would be if it had a salad bar.

Speaking of none of that, I forgot to mention that when Kathy and the kids were here Abby helped me take down a fence. 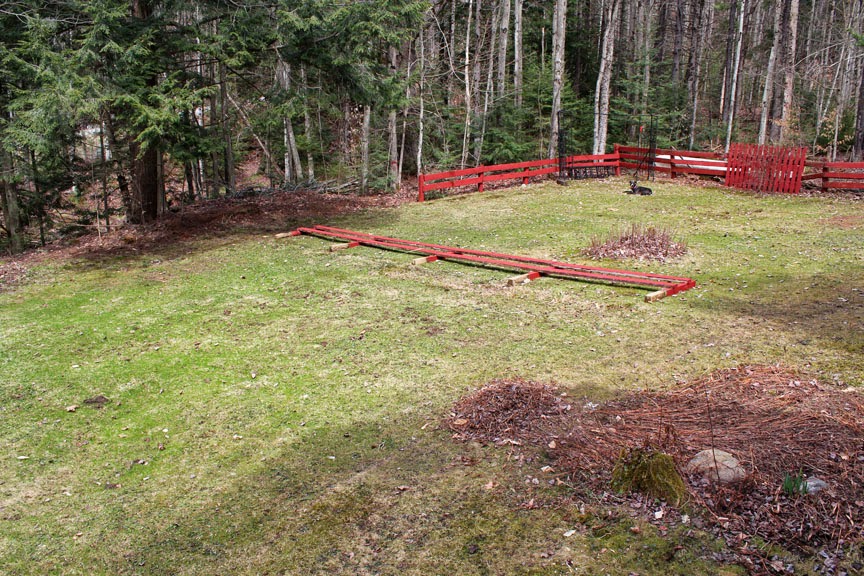 All the posts were loose - the one on the far left is pretty rotten - so it was a matter of lifting the posts one by one and holding the fence up until the whole thing was out of the ground.  Then Abby filled in the holes so a certain active dog doesn't step in one and break a leg.  Originally I hoped to reuse this fence somewhere else but the rotten-ness factor (is that a word?) makes me think it will be easier to start from scratch.  So I moved it out of the middle of the grass. 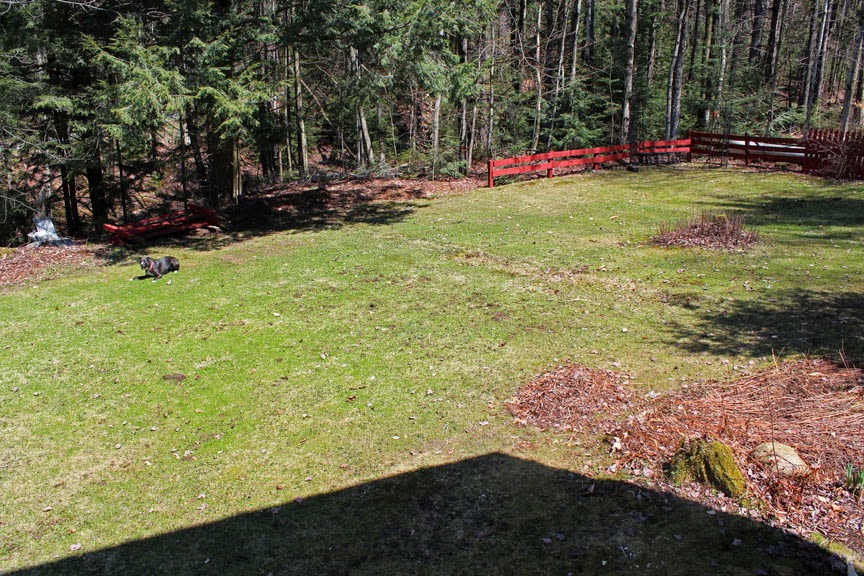 Yep, I moved it all by myself.  Don't ask how - it's a trade secret.  I also took down the fence back in the corner.  It went in the "rotten" pile. 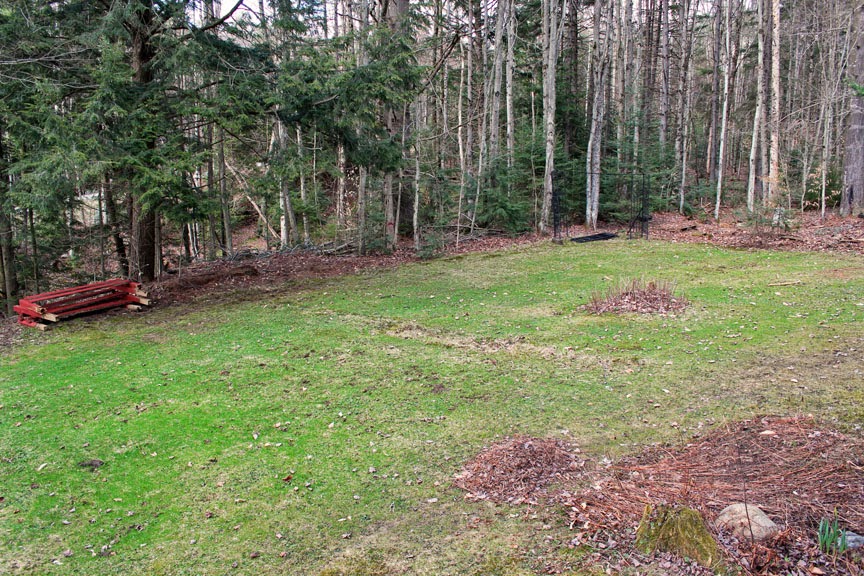 Poodle keeps bringing sticks out of the woods and racing around with them.  It's funny to watch because she is adjusting her gait to that of a smaller dog.  I think it makes her feel like the yard is bigger.

She helped me with another yard project the other day, too: 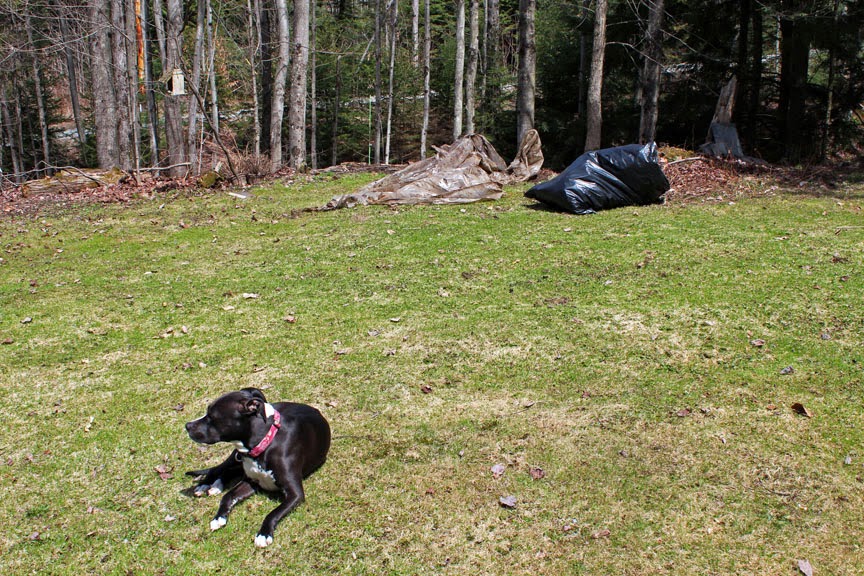 See that extra large, 55 gallon contractor garbage bag?  And the pile of crapola next to it?  As the snow started to melt I saw what looked like plastic over there sticking out of the ground.  So I did what any four-year-old would do.  I pulled on it.  And kept pulling on it.  I unearthed a couple of big glass bottles, some plastic soda bottles, some other miscellaneous plastic bits, and two ginormous sheets of plastic.  Like tarps.  One of them is in that bag.  Most of the other one is the pile of crapola.  Kathy thought maybe it was put down to control weeds.  But no, that would actually make SENSE.  This stuff was all balled up.  It was deja vu all over again.  Remember last fall when I pulled a whole bunch of plastic out of the woods at my old house in Montana?  I'm guessing this stuff was originally wrapped around lumber and has probably been in the yard since the house was built in 1994.  I would not have been at all surprised if I found a dead body wrapped in it.  In fact, if I HAD found a dead body, I would have said, "Oh, there it is."  No body, but I might have to burn the clothes I was wearing.  After filling almost two of those 55 gallon bags, I had to cut my losses and leave some of the plastic buried -- I couldn't get the rest out.

We interrupt this story, which is finished anyway, to bring you some poodle on a red couch: 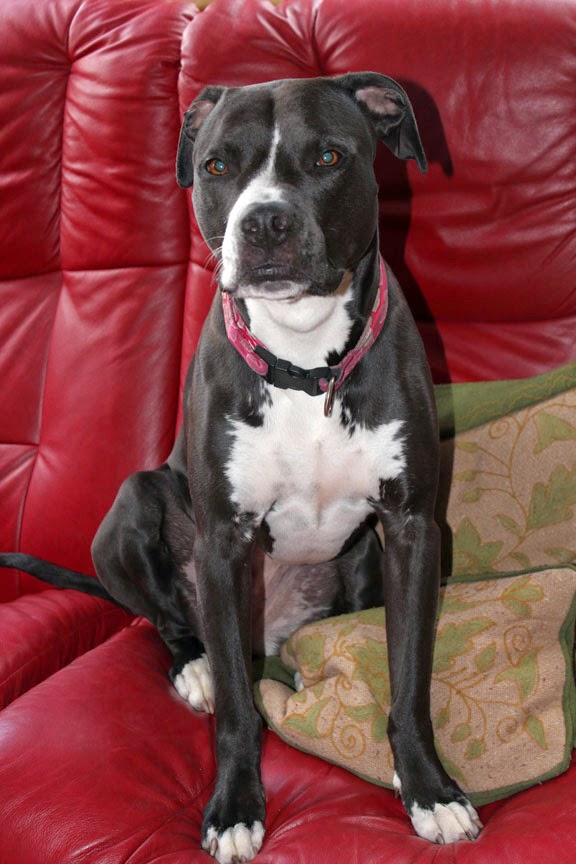 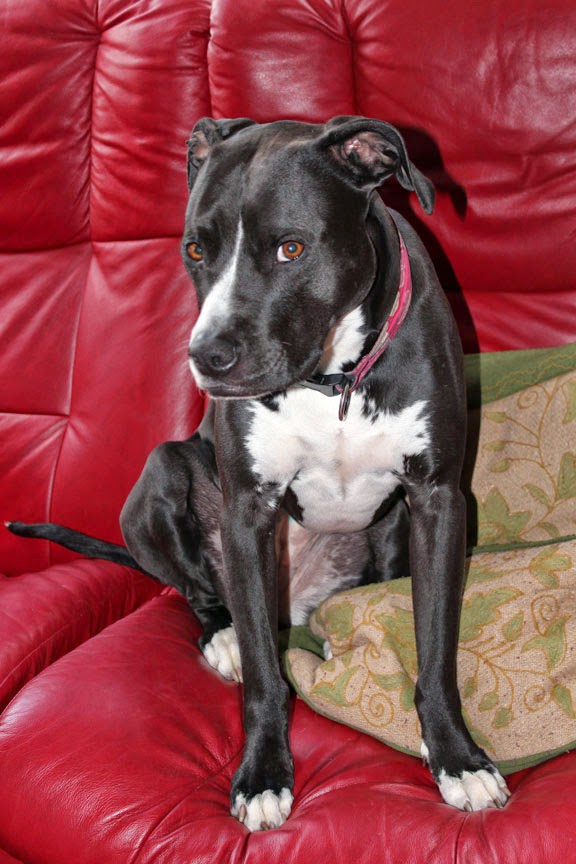 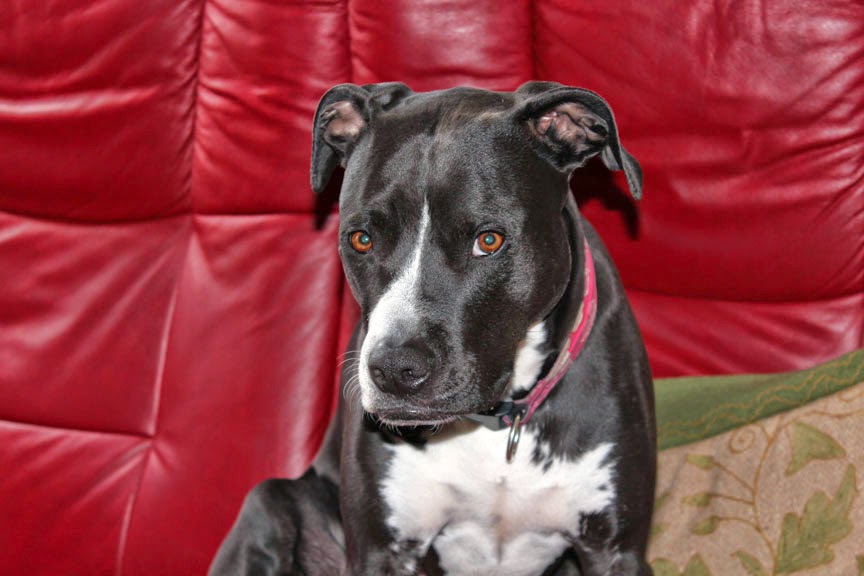 That's my girl.  She loves the red couch.  Thank you, Wayne and Eletra!

Okay, new story that still involves my yard.  Today is Green Up Day in Vermont.

For those of you who don't live in this fair state, Green Up Day is the first Saturday in May and was started by then-Governor Deane Davis in 1970.  It even has its own wee small wikipedia page.  The state provides bright green trash bags and encourages volunteers to go out and pick up trash along public roads.  Individual towns organize their own events (Agency of Transportation employees take care of stretches of major highways) and the day is basically geared around volunteers getting out and helping to beautify their community.  I decided to concentrate my efforts on my own yard.  Yes, I know, it's not a public road, but it needs more help than most public roads.  I recognize that my one acre is incredibly insignificant in the grand scheme of things like, you know, the entire planet, but to me it is important to know that my one acre is healthy and can actually breathe.  Right now it is a garbage dump.  If I could sue the previous owners for non-disclosure, I would.  I had a stern conversation with them in my head today.  In fact, I was downright mean and ugly to them. This is what happened.  I started my tire pile: 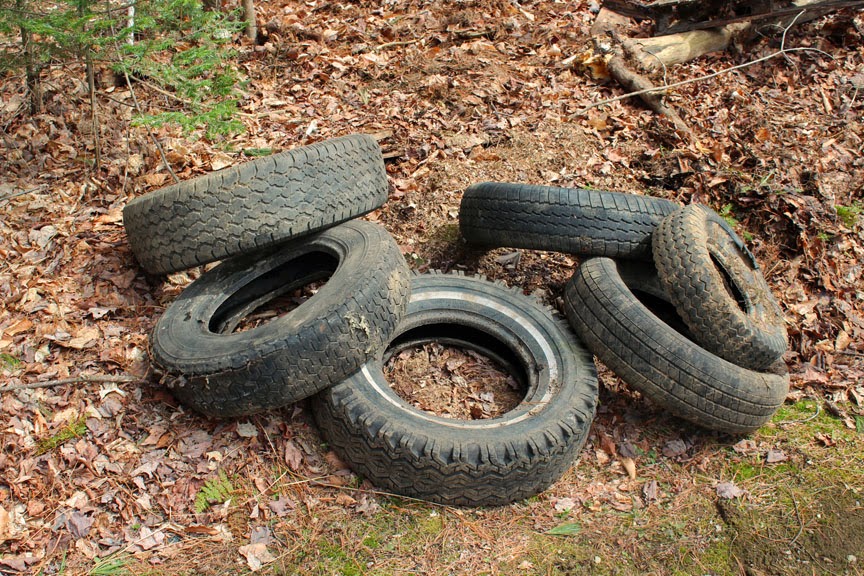 I'm having an informal contest to see who can best guess how many tires I can find on this property.  Let me know your guess - I will send the winner a prize.  (Not a tire - I promise.)

So back up a minute.  Literally, take a couple of steps backward and take that picture again. 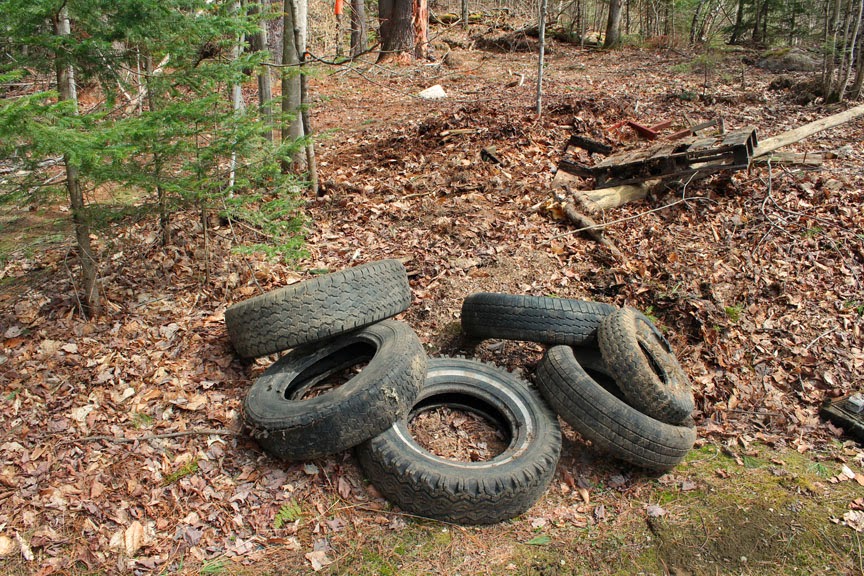 See that disturbed bit of ground behind the tires?  That's an old palette that was mostly buried by a pile of leaves.  I flipped it out of the way, and you would NOT believe what I found underneath it.  First, there was this: 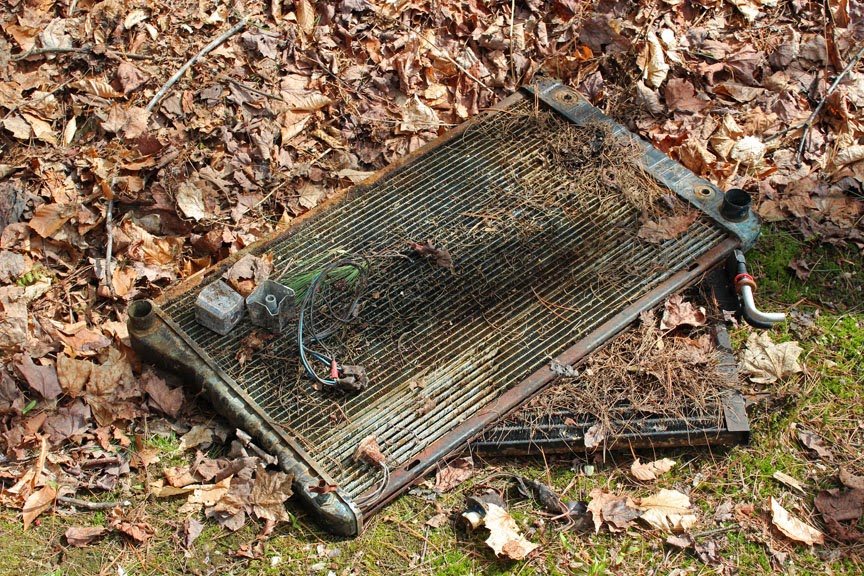 Then, I found almost everything you can see in this next picture except the license plate, the brown window box and the floor mat: 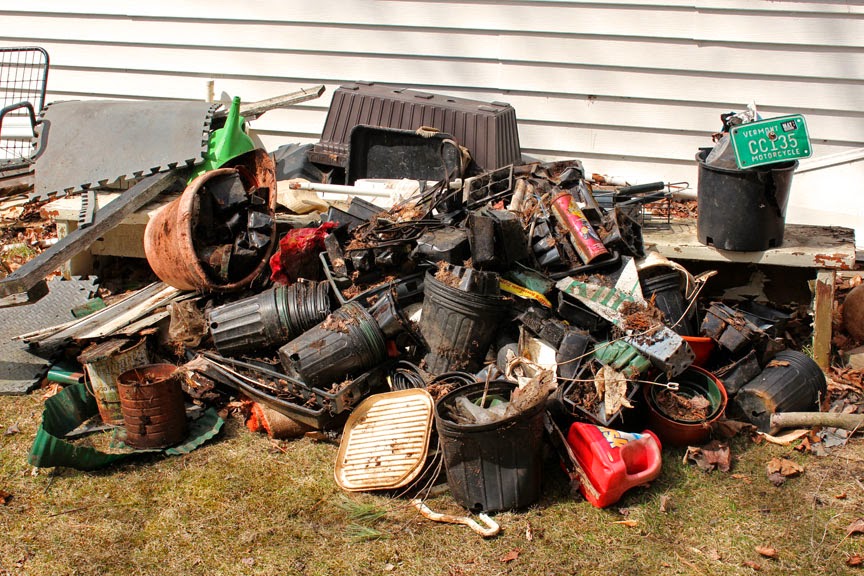 Oh.  My.  God.  That was all in a space the size of a PALETTE!  This is why my internal conversation with the previous owners was ugly and mean.  That dumpster can't get here fast enough!

Wow, whew, deep breath on the count of four.  In, two three four, ... out, two three four.  Repeat.  I must cleanse my eyeballs after looking at that picture: 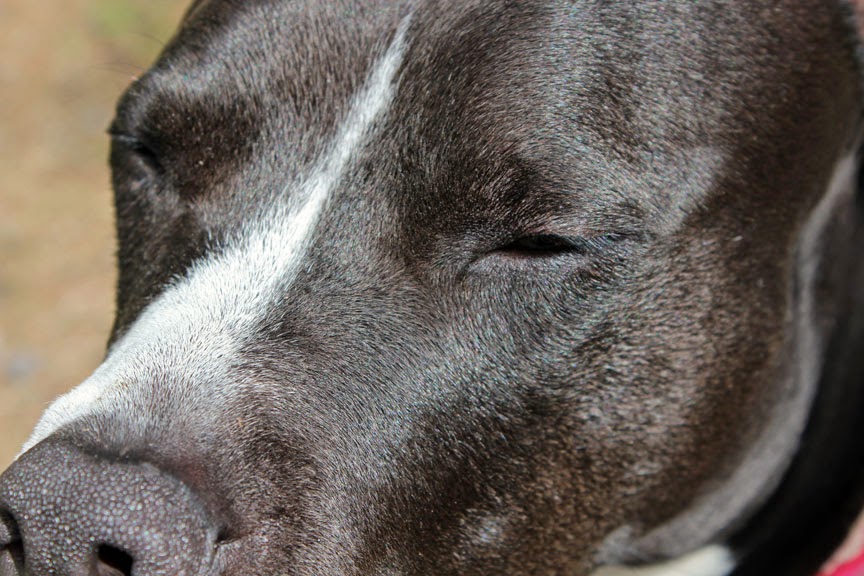 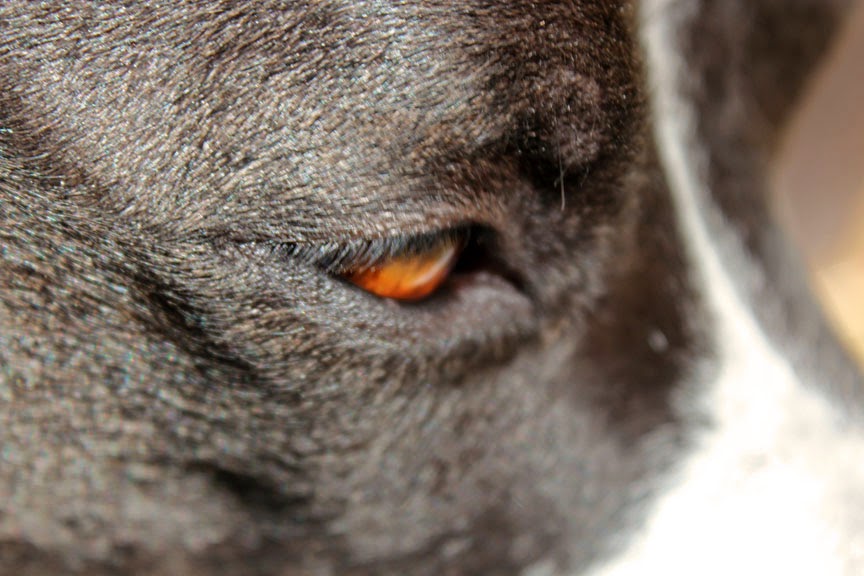 My one crocus has, well, croaked.  Lots of other stuff is growing, but I don't know what any of it is.  If you can identify anything in these pictures (except the birdhouse - I've got that one), let me know: 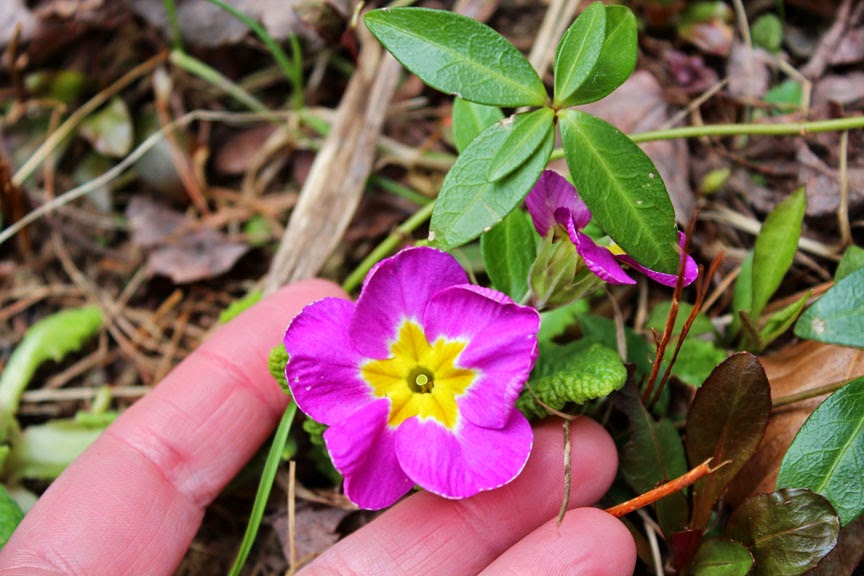 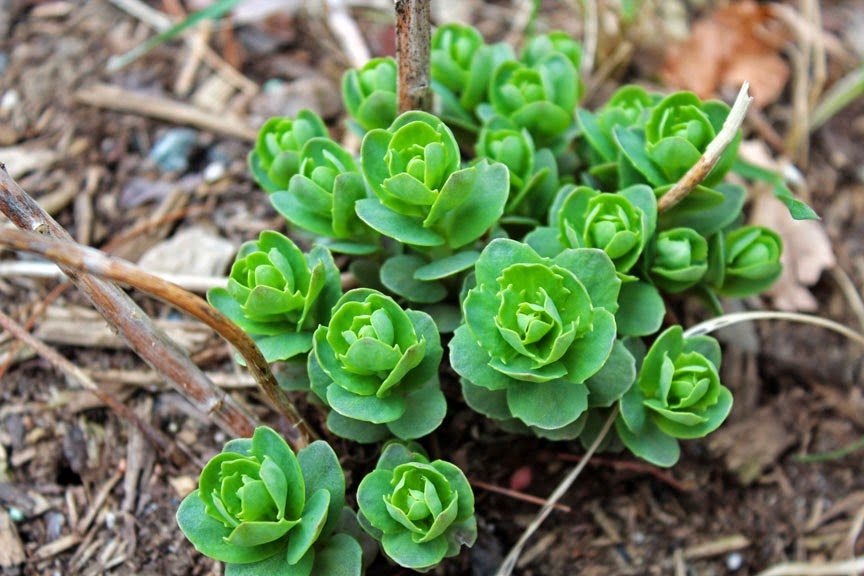 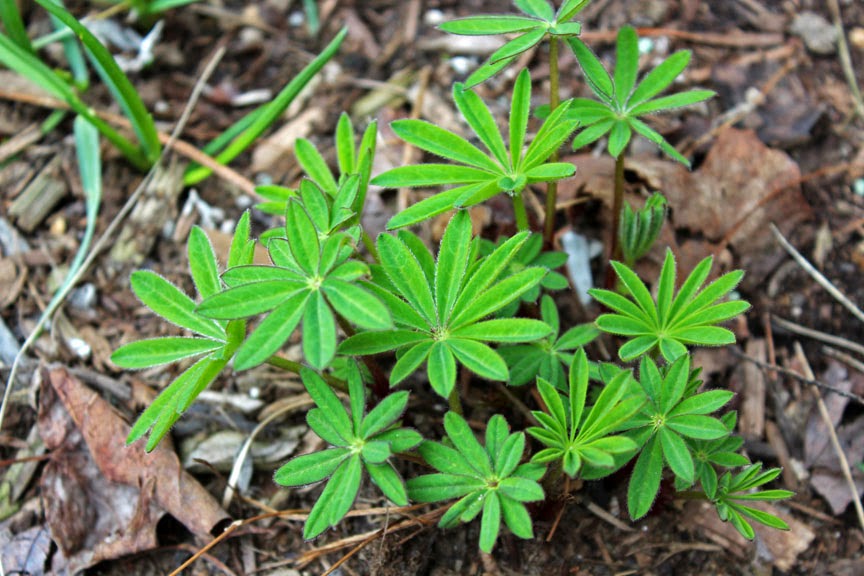 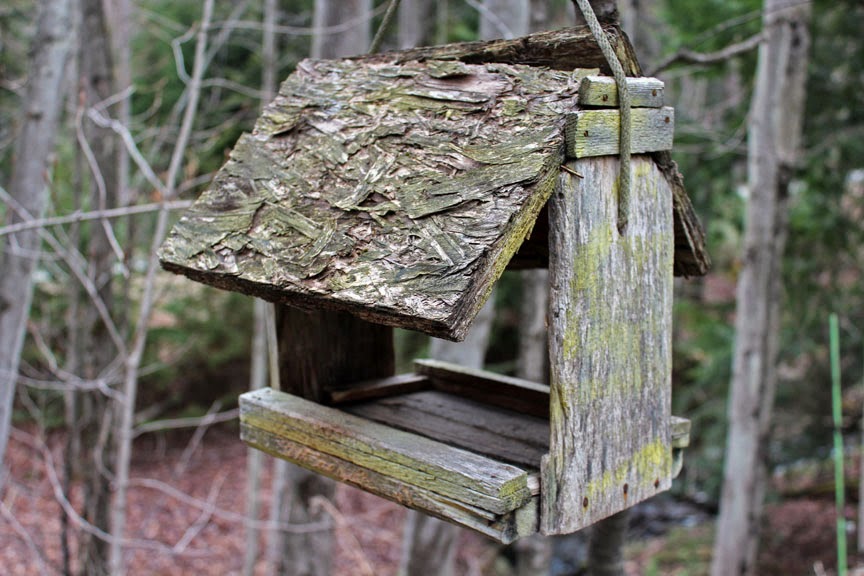 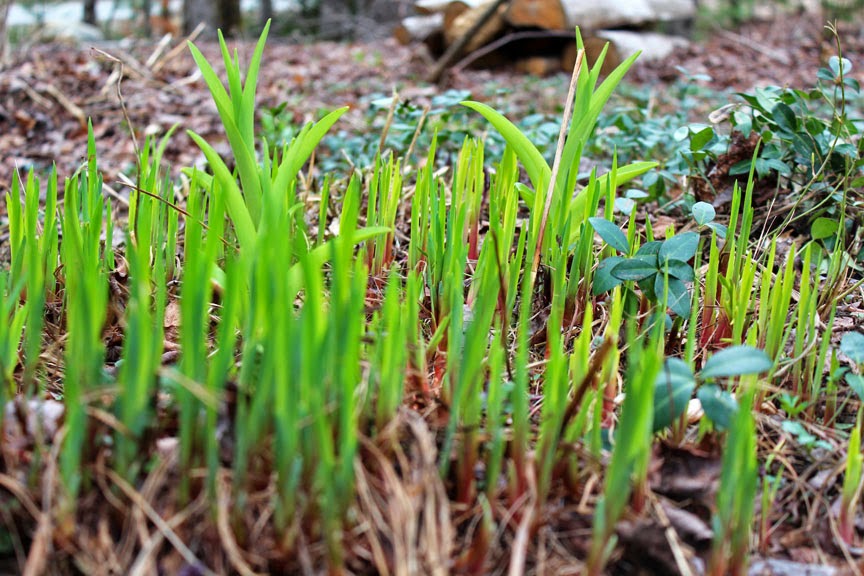 Sorry, I don't think anything in that last picture is actually in focus.

This little bugger has been trying to bloom for days.  I don't know what it is -- a daffodil? 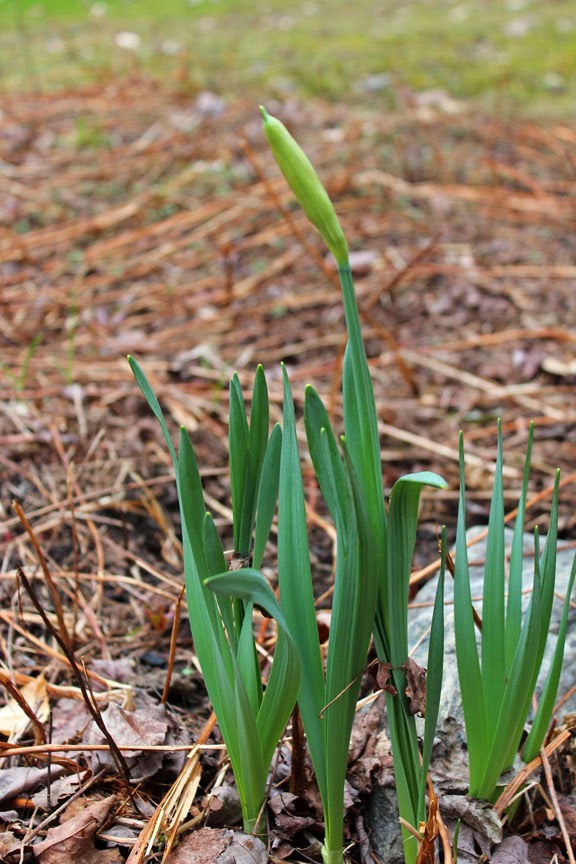 And the trees are budding: 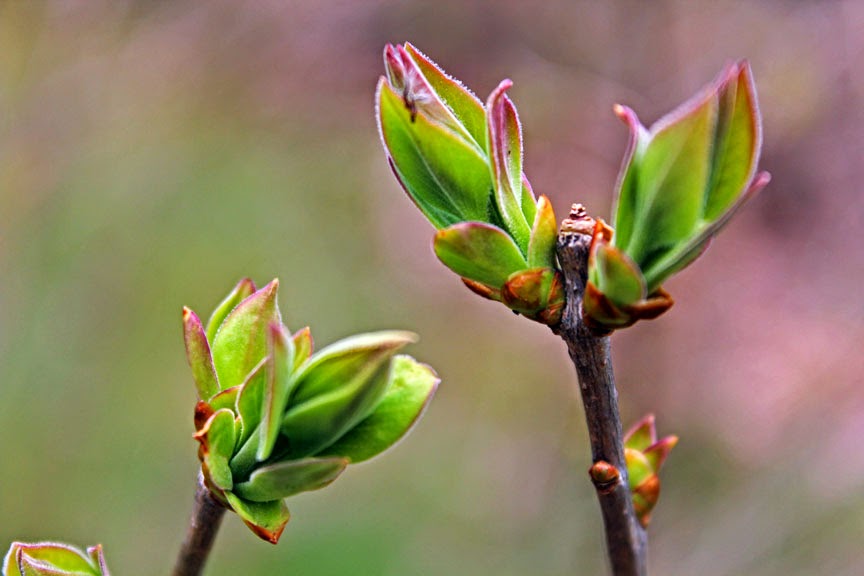 And that's all we've got here for today.  Except for this quote: