My youngest nephew is sixteen.  When he was a mere child, "structure" was a popular word in his vocabulary.  Not a "house", not a "building" - it was a "structure".  So funny coming from a four year old; I still hear it in my head the way he pronounced it.

And now we have a structure about to emerge outside my kitchen door!  But first, I forgot to mention that on Troy's last day here with his excavator he placed three concrete piers to hold the supports for the covered walkway: 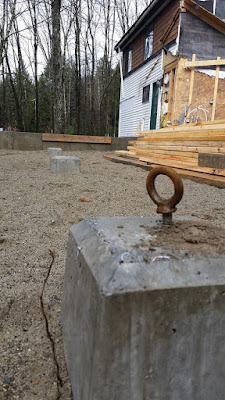 Remarkably, the concrete truck did not run over any of them.

Also, on Sunday, November 29th we got a delivery of 2x12 scraps from another job site.  I will happily recycle someone else's leftovers, especially when they represent a savings of several hundred dollars.  StanLee gave the whole pile a thorough inspection. 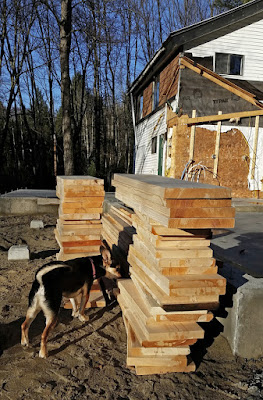 At 7:20 Monday morning this was the view out my kitchen door: 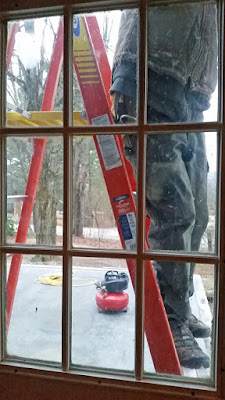 You never know what you will find while living on a construction site.  I think that's Mike, and I think he is removing some of the existing vinyl siding.  The guest room window view was this: 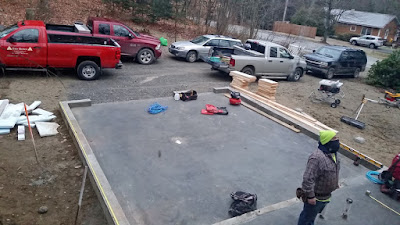 My driveway never used to be wide enough for two cars.

Mom was here for Thanksgiving weekend and she took a few more pictures before heading home.  The first was at 8:20 when a load of material was delivered.  I passed the truck on my way to work. 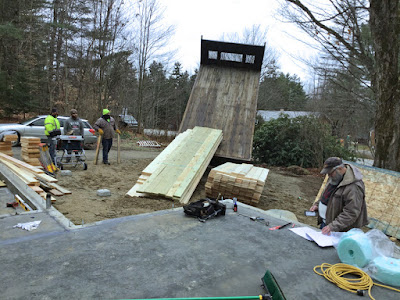 Bryan ordered pre-cut studs so we got two-fer savings:  less measuring and cutting = less labor, and the material was less expensive by a dollar per stud.  At 9:40 the kitchen view changed dramatically. 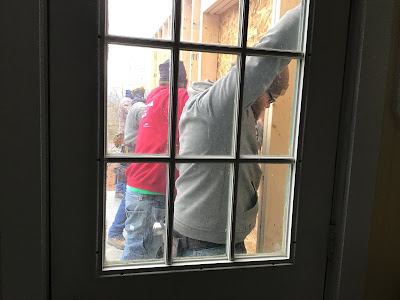 Woo hoo - the first wall!  They started with the most questionable one; it's not quite obvious in the picture mom took from the road how tight the fit is going to be between the kitchen door and the small window, but I've been banking on there being *just* enough room to squeeze in the new exterior wall. 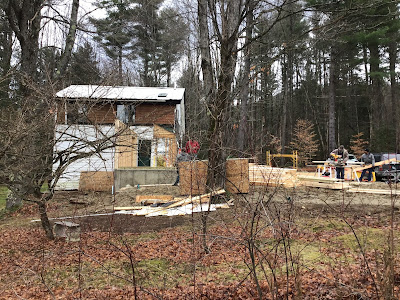 Here are pictures from the next morning so you can see the rest of the crazy progress that happened while I was at work on Monday. 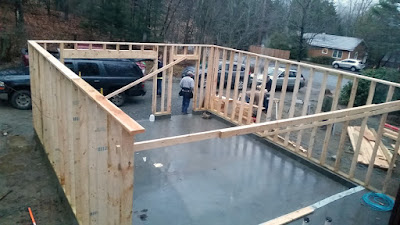 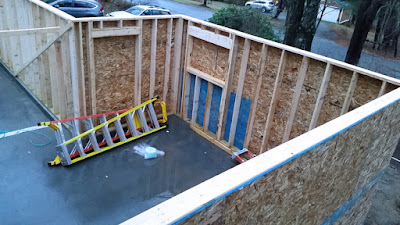 That was guest room window view and hanging out the window above the kitchen. 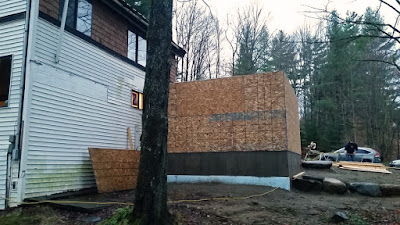 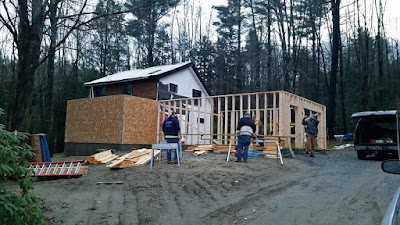 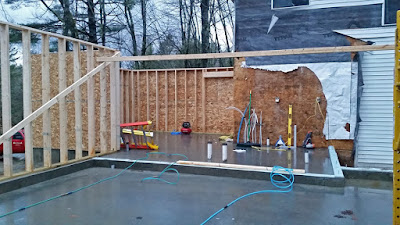 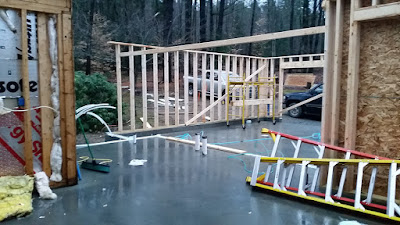 YOU get a wall, and YOU get a wall, and YOU get a wall!  That last one is a little blurry because I was trying to take pictures of the super cool progress while staying out of everyone's way.  But notice how the concrete is wet?  Monday afternoon it started raining REALLY hard.  Like major downpour.  Which normally is no big deal but when I got home from work I found a puddle on my kitchen floor.  Not gonna lie, at first I wondered if one of the dogs had an accident.  I cleaned it up and ... it kept coming.  And coming.  From under the door.  I texted Bryan to let him know and he realized that when the walls went up they essentially created a bathtub outside my door.  And it was still pouring down rain.  About an hour later, after mopping up several gallons of water (on my hands and knees, constantly wringing out a kitchen towel into the plastic laundry basket I use to hold my recycling) he showed up to rescue me with clear silicone.  Turns out my kitchen door was never sealed, which does not surprise me in the least.  Par for the course with this little crooked house.  A whole bunch of silicone under the door sill solved the problem and my sore, raw hands were very thankful.  So I went from a few days with zero water to a day with too much water!  HA!  This was definitely a time when I'm glad I was living on site during construction.  Otherwise I'm positive my kitchen base cabinets would have suffered fatal water damage and the sheet linoleum on the floor might have as well.  Never a dull moment.
We had one more day of wall activity before everyone headed temporarily to a different job site.  Here's a couple pictures from mid-day on December 1st - the guest room view and my thinking chair view. 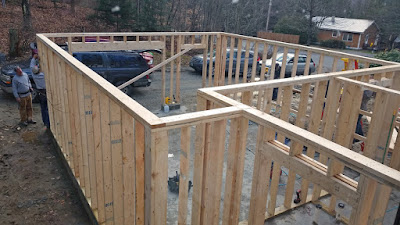 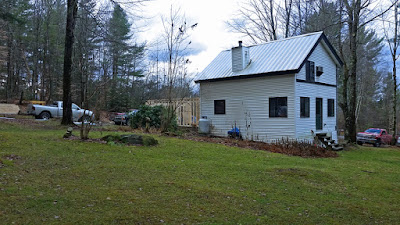 Sorry ski resorts, but I'm thankful this is not one of those winters that starts in October with several feet of snow.  Here's the final progress on first walls - pictures taken at 7:45 on December 2nd: 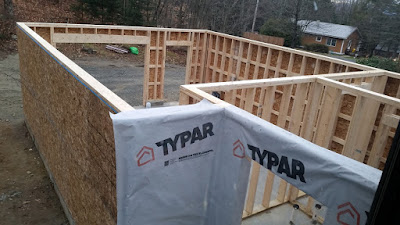 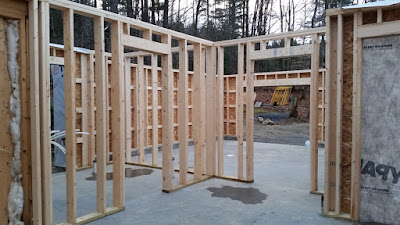 I took that one standing where my new staircase will be, looking out toward the garage.  The house wrap on the right is covering my new front door, then counter-clockwise is the door to the garage and the opening leading to the laundry room and a powder room.  Crappy stuff at the very left is the wall outside my kitchen. 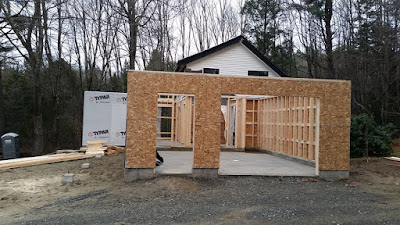 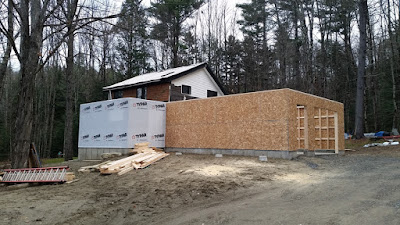 The garage looks ENORMOUS here but it's the exact same footprint as the little crooked house - 20x24. 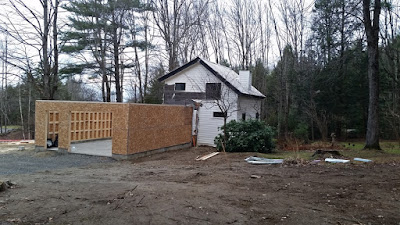 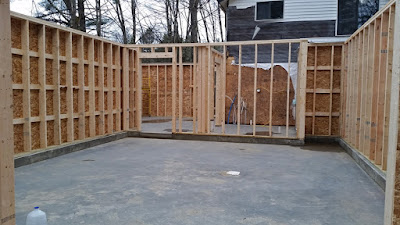 Oh hello, garage.  So happy to meet you. 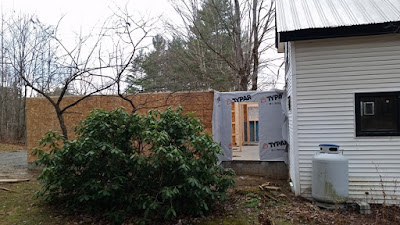 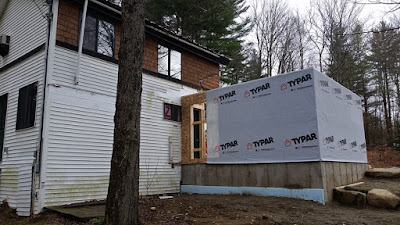 StanLee is going to LOVE that new giant window.  From the outside it looks normal height, but from the inside it's about floor to ceiling.  I foresee a lot of Windex in my future.
Posted by ckv at 10:52 PM