I decided something.  In my one and only post last year I mentioned that it was a craptastic year and I would tell you about it later, but I'm not going to.  Except for the worst part, because we are coming up on the anniversary of when my baby dog Rabbit died.  It was the worst two weeks of my life and then a very long slow road to acceptance of our new normal.  If I were to psychoanalyze myself I would say an overwhelming (and misplaced) sense of guilt plus debilitating sadness made me feel it wouldn't be appropriate or fair to do something that gave me joy, so I couldn't really think about painting.  Some people would have used art as a way to work thru the grief, and I tried a little bit with a new medium, but I just had to process some heavy shit internally.

It was months before I put acrylic paint on a canvas again, and when I did this is what happened: 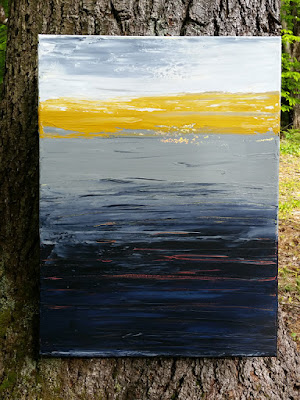 It may not look like much, and I haven't even varnished it, but this piece means a lot to me.  There was no plan; a friend who knows I love Payne's Gray gave me a couple of tubes for my birthday so that was my starting point.  I troweled it on with a big palette knife, grabbed some additional colors, and even let some of the previously painted canvas show thru.  It is perfectly imperfect.

I miss Rabbit every day and I'm still not always able to talk about her without crying (like right now).  She was a weirdo little nugget and I am eternally grateful that I got to be her mom. 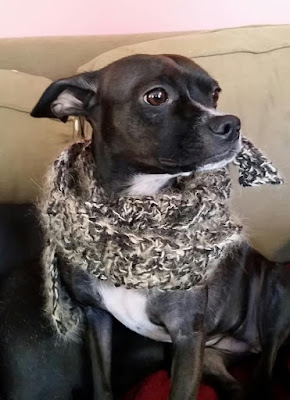