Have I mentioned lately that I'm trying to up my mileage?  Have I mentioned why?  We've got a team registered for the 25th Annual KeyBank Vermont City Marathon & Relay, which will be held on Sunday, May 26th.  Our team consists of me, my brother-in-law Johnny (team captain), my niece Abby, and my other niece Delaney.  The current plan is that Abby will start the marathon and her dad will run with her.  Then Johnny keeps going for the next leg.  I jump in around the halfway mark, then Delaney gets the last leg, which I will run with her.  This is not typical behavior for a relay team, but it doesn't seem fair to throw a 12 year old onto the starting line by herself with a billion other people.  I plan on bailing somewhere close to the end so Delaney can cross the finish line by herself, unless she wants to run her leg totally by herself.  The problem as I see it is that the relay course is split into five legs, and there are four of us.  I'm not sure how all that is going to work out but I'm leaving it up to our team captain.  I suspect there may be a bit of wingin' it involved.

Listen up, now, because this next part is important.  The name of our team is "ALLmost There" and we are running this marathon relay for charity.  Ever since my nephew Evan was diagnosed with leukemia (Acute Lymphoblastic Leukemia or ALL, hence the name of our team) when he was three, his parents have been very active in raising awareness for the Make a Wish Foundation and for Vermont Children's Hospital.  Our team is made up of Evan's sister, Evan's father, Evan's cousin and Evan's aunt.  Johnny has set up a page for donations through Team Never Give Up Ever and if you feel so inclined, we'd love your support.  You can donate right here.  We're not trying to raise a zillion dollars, but every bit helps.  As the site says, "Every mile for a child."

As I run each week and catalog all of my aches and pains, I keep reminding myself that I've got it pretty good.  Over the years I've been to plenty of clinic appointments with Evan, and frankly my hip pain and my knee giving out are nothing compared to what some of the kids up there deal with.  I'm still trying to get to this point again -- 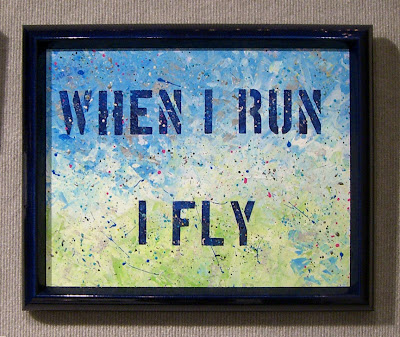 -- but I'm happy for every step I am able to take.